It's WIPocalypse Sunday and for once, I am actually posting on the day itself! Yes I know, I don't really understand what's going on here.

The topic of the month is What SAL’s are you participating in this year? and I think by this time in the month, you've already seen most of them, but let me give you an overview nonetheless, there are quite a few now!

There is WIPocalypse, of course - checkin on the last Sunday of the month, answer the monthly question take part in a few fun extra challenges throughout the year. I'll also use these checkins to you you my progress on Rachel's and mine The Loneliness of Autumn SAL - a slow one at one 50cm length of thread a day!

Speaking of Rachel, I'm also taking part in her Fully Finished Gallery SAL again, showing fully finished objects on the 10th of each month. I am aiming for a minimum of two per checkin, and since I'm also stitching a couple smalls, that shouldn't be too hard to do.

Then there is a bunch of SALs hosted by Jo - the Gifted Gorgeousness, posting about gifts and gifted projects on the 15th, and The People's Choice, posting about a new topic every month on the first Saturday. She's also hosting a couple of Blog Hops throughout the year (the first one being Valentine's Day Secret Sweetheart, which is open fpr signups right now), and I might be teaming up for a SAL with her later in the year as well.

Some of you might remember my D.E.S.I.G.N. SAL (Designers Everybody Should Instantly Get to Notice) that I hosted a couple years back. My friend Ashley is doing a revival of the concept over on deviantArt, so I'm linking up there each month. Here's my post for January (I actually might go ahead and link to this every WIPocalypse as well, if anyone is interested).

My friend Magical is also hosting a bunch of SALs again this year. I am stitching the Bookmark of the Month and the 2020 Blackwork SAL and will soon start her Temperature SAL as well! On top of that she has a couple of Mystery SALs throughout the year (usually one in spring, one in autumn, and one on New Year's Eve) that I will attempt to stitch along on.

I hope I didn't forget something, but I think that's plenty already, isn't it? 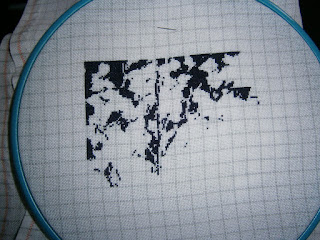 That's almost two pages of my first colour, and I'm actually quite happy with progress so far. According to my calculations, I should be able to finish the first two colours this year, which will amount to about 25% of the whole thing done!

I'm also doing 10 + 10 = 20 this year - working in chunks of 10 hours (check - this is going really well so far, and I already have a new 10 hour update to post, later today or tomorrow) and getting my WIP count down by 10. Just yesterday, I finished the green/silver shawl I stared in December (I took it along to two movie nights with friends, then took a few minutes to get all the ends woven in): 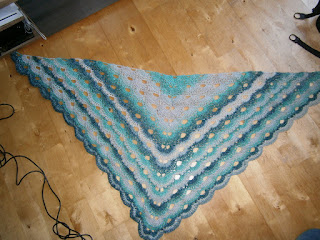 Posted by Leonore Winterer at 17:02

Great post, you really are a busy bee! There are so many good SALs around it is tempting to join them all.
Nice start on the Autumn design. Colour by colour is a good technique for this one.

I think SALs are good to keep you accountable to your stitching goals. It looks like you are participating in some interesting ones.

That shawl is gorgeous, can't wait to see everything you have going this year

Leonore: The shawl is beautiful, that is a lot of stitch's, wow.
I can only do one SAL at a time.

Your shawl is beautiful and that's a wonderful start on Autumn. I will check out those SALs you mentioned!

Great start on your HAED, those bright colors are going to really pop when you start them.

Lovely shawl finish and nice work on the stitching too!

That's quite a few SALs AND I've seen your name appear on a couple more since this post. You really do like your SALs to encourage you along, don't you?! :)