Yes, I know I am late (for the WIPocalypse checkin) and I also know I am early (after my last update), but as we are going away for a long weekend in Hamburg tomorrow (The Lion King musical, visiting friends and relatives, and just general sightseeing), that is just the way it works out right now :) Also, I already have a bit to show off again already, so why not!

But first things first: Measi, our host for WIPocalypse has announced she's holding an olympic stitching challenge for the Olympic Games this summer. While it sounds like a lot of fun, I have decided to not participate, as I have already to much on my plate in terms of SALs and deadlines - instead, I have another little fun thing planned, which I will talk about at the end of the post. So my question to answer this month is: Tell us how this year’s stitching is going for you so far, and if you’re meeting your stitching goals so far for the year. I have to say, I am extraordinarily satisfied with my stitching this year. My goal this year was to not make goals, so I've just kind been going with the flow, and it has been a ton of fun while still leading to a lot of progress! I've been able to join a SAL when I wanted to, to include more presents in my rotation, and so far I've been even able to keep all the deadlines. Sure, there are things I thought I'd work on, but not having made plans, I'm not too upset stuff didn't work out.

Now for my current progress...I've been busyly working on the backstitching and wording of my grandchildren project, and I've managed to finish the upper page. The next one is a lot bigger, but less complex as well - mostly because I translated the upper-half-wording (the original ready 'Grandchildren are the flowers in the garden of life'), and the translation needed a few letters that weren't there in the original, so I had to try and chart those out myself...I think it worked out okay, though. 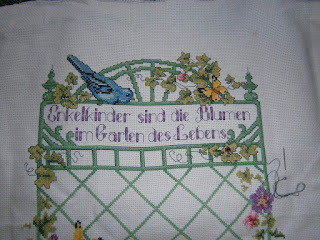 Then, I also worked a bit on the Strawberry Sampler that needs to be done by the end of August, and I finished two more bands. I didn't care much for the plait stitch, which I had to do two bands of, but Herringbone was fun, and so was the cross stitch and french knots (yes, I do like them if there are not too many) in the first actual strawberry-band. I was halfway done with that when I realized it is not, in fact, symmetrical - it's three crosses away from the edge on one side - and I had half a mind to rip it all out again, but then I thought - if I didn't realize until now, after looking at the stitched picture again and again, it wouldn't bother me too much later on, so I just filled in those few stitches the same way Jo, who gifted me the chart, did with hers. 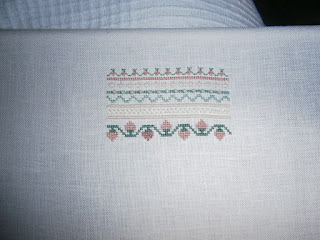 I also had a bit of progress with my knitting - I started to turn the rest of the watermelon yarn (I gave the socks to our admin today, and they fit!, if only barely) into a pair of wristwarmers for myself, and as these knit up really fast, I already finished the first one. I also bought some seriously delicious yarn (that refuses to be photographed in all it's deliciousness), and I even made a small start on what I want to do with it (after giving it the wool winder treatment - at 330g a skein, this almost broke it down, but only almost), but I didn't like it too much so I undid it and I'll look into slight alterations for the beginnung. 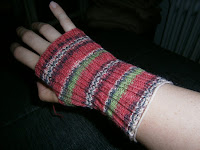 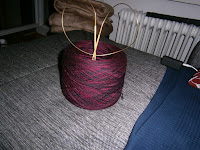 Now, as I mentioned earlier, I have quite a bit going on in terms of deadlines and SALs - the closest ones being a) the start of our Halloween SAL on the 13th of August, b) having the grandchildren project finished and framed by the 26th for the birthday, c) having Stawberry Sampler finished and framed by 31st and d) stitching another page of the Fire and Ember SAL. Also, we'll be away from home for at least two weekends and four weekdays during the month, so I will have to see what I can take with me and what not. So in order to get all that done and also motivate myself, I will mostly skip regular posting for the month of August - BUT I will try to post quick picture of my current progress every day, just with less text. I hope this is something both you and I can enjoy, and I'm really looking forward to it :)
Eingestellt von Leonore Winterer um 22:52 4 Kommentare:

Although I'm almost a week late for both of these SAL checkins, I hope you will forgive me - Felix' sister turned 30 this year, and we spend the IHSW weekend at his parents house for celebrations. I did take my stitching with me, but didn't get much done, but my knitting made some good progress and I really enjoyed it. Stitching progress did happen in the rest of the time, though, so I do have a bit to show you.

Let's start with a piece that doesn't qualify for neither IHSW nor for GG - the Fire & Ember SAL. I finished the first page just in time before we went away for the weekend, so despite also working on other stuff, it only took me two weeks out of the month time I had. Also, my needle minder has finally arrived, so stitching the next page in August will hopefully be even more fun! 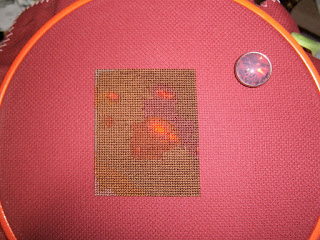 My main focus piece during IHSW was the Snowflake Party shawl. As we were not at home that weekend, I had some time to knit in the car and some more on the party itself, and I am almost finished with the base-section now - so in the future, there will be a lot more snowflakes on this! 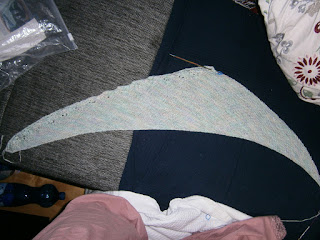 And then I also worked on two projects that qualify for Gifted gorgeousness - stitchingwise, I focused on the grandchildren project, and apart from the writing and a few small motifs in the center, I'm all done with the cross stitch now. I already started on the backstitching and it's going really fast, so I should be able to show you some more progress soon!
I also got some more knitting done on my watermelon socks, and they are finished! Although I noticed that somehow they turned out a bit smaller than the last pair...I didn't bother measuring and just used the same stitch and row counts and somehow either I've been knitting more tightly or the yarn behaved differently. I hope they will still fit the recipient's feet, but in the worst case I will have to make a new pair for him and keep these for myself. 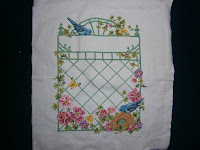 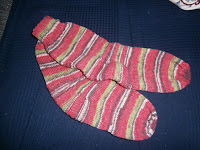 So that's it for today...there's more exciting stuff coming up, both craftingwise - our Halloween SAL starts in August, and I also ordered some superawesome lace yarn for a new knitting project - and otherwise - Felix and I are going on a short vacation to Hamburg next weekend to see the Lion King musical and to visit some friends and relatives, which also means two 6+ hour trainrides with hopefully lots of knitting time!

After the last few weeks where pretty mixed in terms of weather, we now seem to have finally hit a streak of warm days. And now I'm the one having mixed feelings, because I'm kind of enjyoing the warmth but it's also too hot and sunny to be outside without shade, and we're still waiting for the sunshae on our balcony to be fixed. So I've been mostly sitting inside, which let to a nice bit of stitching progress. The enxt few weeks will be busy with stuff though, so I will have to struggle to keep up with everything!

First, I continued working on my current projects. I stitched about half of the top page of the grand children project - not much more to go until I can start on the backstitching and personalization! I also stitched some more on the Strawberry sampler and finished the bands #2 - #5. I got to use the pearle thread and some beads, and it was a lot of fun to do all the different stitches, especially on the tiny fabric count! ALSO I made some progress on the second watermelon sock (and that shows me how long overdue this update is as I haven't knitted in over a week), I finished the heel and started on the foot. I will have some time to knot next week, so hopefully I'll have a finish soon :) 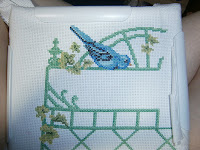 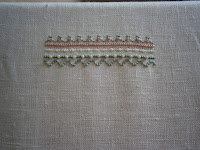 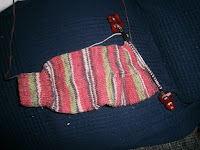 Then finally the time had come for the Fire and Ember SAL! The first page was started on July 2nd and is entirely background, mostly big blobs of brown-ish with some brighter blobs. I enjoy stitching colour blocks from time to time and I am severly enjoying this project so far. Here is where I was one week in (I did a bit more since then) and I think I should be done after another week. 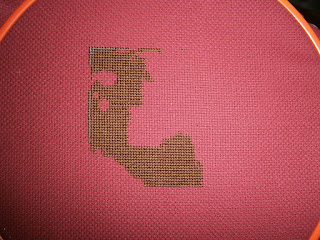 Lastly, I also upgraded by equipment for winding wool a bit. It is so much faster and so much more fun than winding the skeins by hand - and it makes such pretty balls! One by one, I will wind all the wool I have in skeins, and also rewind the balld I bought since the don't unroll as nicely as the selfwund ones. 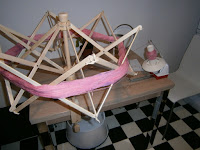