As usual, Jo is hosting her yearly spooky Halloween Blog Hop and as usual, I wanted to be a part of it! I had actually hoped to have some new Halloween Stitching to show you today, but life happend to by busier as planned (so, business as usual!) and all I can show you is a shot of my current Halloween-y stitching project that hopefully will soon be finished. 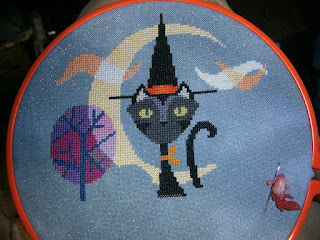 The letter I  get to share with you is M, and you now can hop over to The Crafty Princess for your next clue - or head over to Jo's place to find out what this is all about!

The month is almost over, but finally I get to present you my first editin of Jo's new Zodiac SAL! I apologize for taking so long, but first I had no idea what to do, then I had one idea, then I had another idea, then the first idea exploded (in the sense that it became more and more elaborate!) and then I still had to stitch all of it. And life (or rather, work) has been really busy those past few weeks, which is also why I haven't posted anything else in a while...you get the drift, but here I am.

My first idea - you know, the one that blew up - was to finally finish-finish the birthstone ornaments my friend Magical designed and that I stitched up over the last two years or so. At first, I wanted to just put a pretty fabric on the back, maybe doing flat ornaments or something - but it just didn't look right, the fabric was too stiff, and then I really liked the garland finish Magical had done with hers...so back to the drawing board I went, and then I came finally up with an idea what I could put on the back for a regular pillow-ornament finish. And then I thought I could stitch up the missing ornaments as well - there are some months with more than one birth stone and I only stitched on ornament for each month so far.

So for October, I stitched the back for the 'Pink Tourmaline' ornament, and then also the front and back of the 'Opal' ornament, and I finished both of them using beads from my stash and a braid of the three DMC colours used in each ornament, doing a short and a long loop so I can use them both in a garland or on their own: 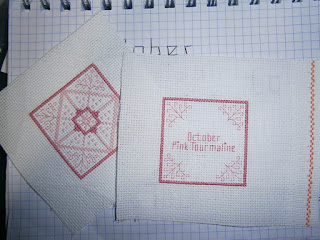 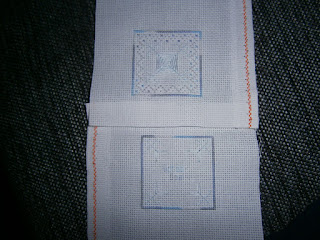 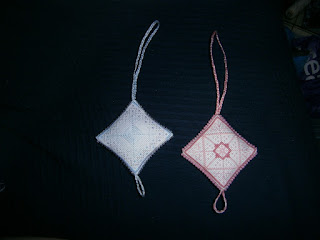 My second idea also bases on Magical's patterns - what can I say, I do love her work! You might already know that my friend Ashley made a series of patterns based on Hannah Alexaner's Mucha Disney Princesses, and Magical made a series of fob or ornament patterns, going with the colour theme and style of each princess, to help her promote pattern sales. I had that vague idea of mapping the princesses to the zodiac signs, so I asked a freiend of mine who knows both her disney and her zodiac, and together we came to a mapping we both agreed with. For Libra, we chose Jasmine - I think she's even one of the few princesses that has an official birthdate - and I think she really fits nicely. Her ornament was a super pretty oriental star - I stitched the front with a lot of beads and kreinik, and then I did the backstitch again for the back because it was sooo pretty and I wanted to feature it a bit more, and then I nearly knotted my fingers doing a slightly shapped ornament, and my first ever selfmade cording. I only stuffed it a little bit because I did not want to disort the shape too much, but it's still a bit big and arkward as a fob, so I'll just use it as an ornament. 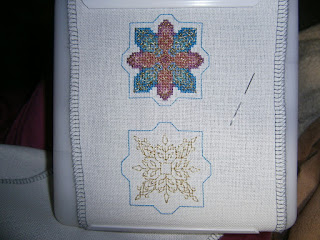 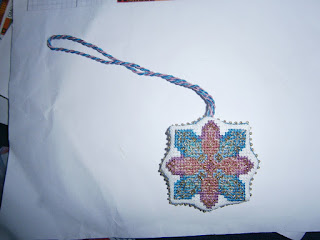 You know I don't usually do a lot of smalls, and even less finish-finishing, so working on these was very interesting and also a lot of fun this month, and I am quite proud of myself! I already started on the ornaments for November, so hopefully I won't be as late as this month.

I'm having kind of a dilemma here...I am almost not late for my checkin, but I hardly have anything to show! Which is not because I didn't work on any gifts or freebies (great shoehorns for GG!), but because I can't show any of those yet. So...oh, I do have one thing to show, and that is an updated picture of those blue socks I'm knitting for Felix' dad. They are a bit shorter than the last ones I made for him, so I already reached the heel. 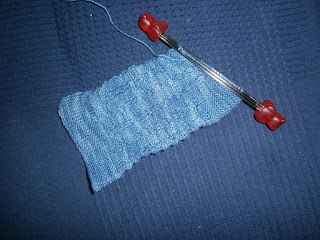 Now for my non-GG stitching, I did make some progress on my Halloween Cat - the first pumpkin is no finished and I love those vibrant colours! Also, a cat leg has appeared and is waiting to be attached to the rest of that spooky feline. 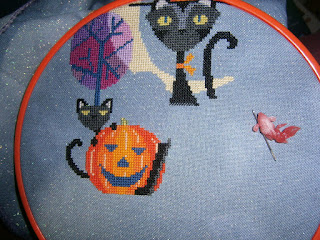 And then, of course, the dragon made a comeback last weekend and saw some progress as well. I might even finish the page next weekend, if I can find some time! 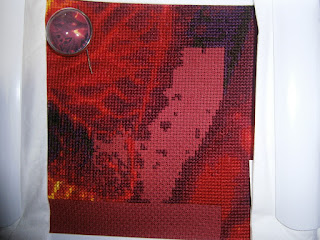 In the end, one last thing I wanted to mention for a while, but I keep forgetting - I usually 'deal' with the comments I get as they come in as emails and I answer them (more or less straight away), but lately I have noticed that some comments are not coming in as emails for some reason. So I don't know if this problem lies on my side or on yours - and if anyone can enlighten me in that matter, shine away! - but if you've felt ignored by me in the past, I am really sorry and I promised I was not doing it on purpose!

The dragon and the kittycat

This time, the title sounds a little like a children's book...in fact, I am sure it would be an awesome book if a dragon and a cat were the protagonists! Nevertheless, what I am actually talking about is my weekendstitching, and that was yet again two projects. My main focus was, as usual, the Fire and Ember SAL. I did not get a whole lot done - Felix had to work Saturday, so I was doing other things than our usual 'Netflix and Stitch' routine, and Sunday we went to my grandparents to celebrate their 66th wedding anniversary - but I did make some progress after all. I really enjoy filling those scales in, they are turning out so lovely! 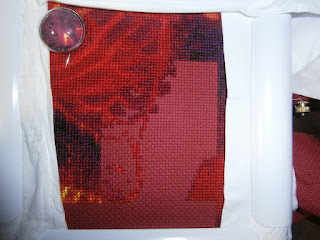 And then I was also doing a little stitching on my Halloween Cat - I have not given up on her yet! Over the weekend, I stitched the left kitten, but I forgot to take a picture, so now you will see the kiten plus a bit of the pumpkin I am working on this week. 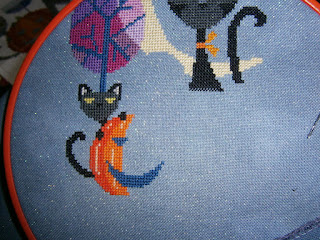 The Princess and the Puppeteer

What sounds like some kind of new-age fairytale describes, in fact, pretty accurately my stitching progress over the last week or so. I worked on Snowwhite - in fact, I made quite a bit of progress. I was a little bit behind on my 'one length a day; so I got caught up, andadded an extra week for good measure. In that time, I got to the upper edge of the skirt, and then stitched the first colour of the bodice, because I really needed to see that the yellow ends somewhere! This part was a bit slow, since there is a ton of quarter stitches around the edges. I then went on to start the next shade of yellow (you can see just a little bit of it in the bottom right), which is a really lovely shade, and there will be a lot more of it in the coming weeks. 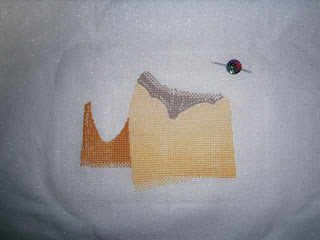 I also continued my daily work on the Puppeteer, plus a little extra, so I am almost caught up now! I do have another 'black-page-finish' to report: 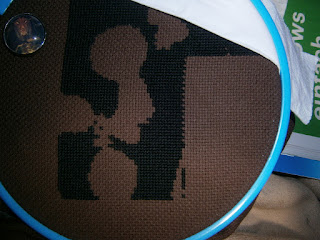 I am late...because I almost fell into that 'want to do everything at once' trap again. I did get out of it, however, and packed away everything that was threatening to distract my, and I am back and ready to focus!

The question of the month is Which floss (or color of floss) do you absolutely adore and want to stash constantly? I don't really have an answer for that. I do own a full set of DMC because it's just so convenient to have. I will buy extras if a project requires a whole skein or even several skeins. I love all colours, and while I do love overdyed flosses and hand dyed silks and the like, I don't usually buy them 'just in case' since I am always afraid that, once I find a project I want to use it on, I won't have enough to finish! I'm trying to build a little stash of metallics, though, as for small project the exact shade is often not so important, but they still deserve that little extra bling.

Now for my progress...I did finish that page of Fire and Ember I was working on, which means my dragon now has an almost complete face. Reason enough to snap a quick overview shot when moving the frame for the next page! 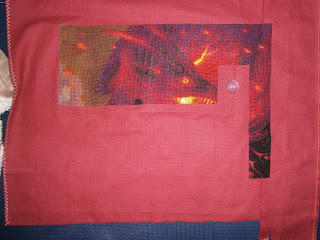 I also did a little crochet this weekend to do part 2 of the pineapple CAL. I like how the pattern is coming out, but this will have to go away for a while so I can focus on a few presents that need to get finished. 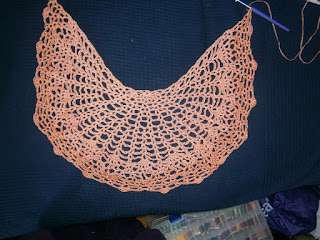 Halloween Cat did see a little more love and I finished the first of the trees. I plan to keep focusing on her, although at this rate I am not sure I will be quite done by Halloween!

Lastly, I had a start on the October page of Fire and Ember just yesterday, and so I only finished one colour so far (though it is 817 - my favourite shade of read on this project!) 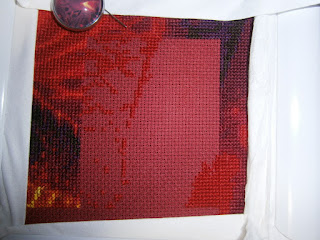