Since I don't really celebrate and no kids have stoped by today, I almost forgot it, but as Jo has kindly reminded me, of course it is Halloween today, which means it is also time for her very spooky blog hop! 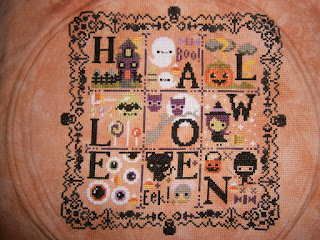 Here's a very spooky Halloween Sampler I stitched last year, and my letter for this year is D! Now please hop on to http://chaosatlanta.blogspot.com, and happy Halloween!

Hello my lovelies! I'm a bit late for this month's WIPocalypse, but I am also bringing presents...well, pretty pictures of pretty stuff, at least! I've been busy as ever, but now we have two weeks off work and we fully intend to enjoy those, and with the weather being gray and wet as it is, enjoying also means a lot of crafting time for me. But first, onto the topic of october: What online stitching communities do you enjoy? Online stitching communities started with the Stitching Pirates group on deviantArt for me, then came blogging, then a few groups on facebook (and also, not for stitching, but for knitting and crochet, ravelry). Apart from blogging, though, I'm more of a passive member, I occasionaly update on dA (sorry Carla, I promise to try and be better!), but I hardly post my stuff on facebook...I do enjoy reading along and looking at other people's pretty work, though! Online communities are pretty much the only way for me to chat about these kind of hobbies, as I hardly know any stitchers in real life.

Now for my progress in the last...has it been two weeks already? First, I finished page 4 of the Fire and Ember SAL. I thin this page looks really really awesome, I can't stop looking at it, and I even managed to get ist pretty well on the picture: 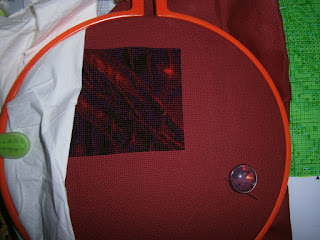 Next, I worked on the October installment of Magical's monthly ornaments. Here is pink opal - I really enjoyed working on this one, especially with the light pink. It's a colour I don't use often, but I think it's really pretty! 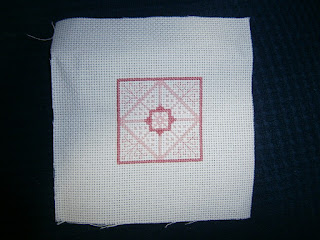 Then, to get back to my list, I knitted up the second pair of baby booties. I don't think you can see in the picture, but I did those a bit different, I think I read the pattern wrong in one point for the first pair. Doesn't look much different, but a lot easier to make! Also, I used the same yarn as for the others, since the leftover of a jacket was just barely enough, and my leftovers all weigh in differently, so...I didn't want to risk running out. And I still had a full ball of this orange/green yarn. 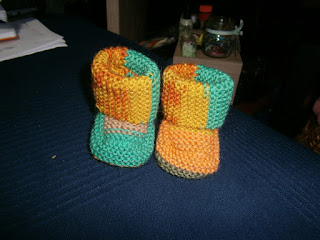 Lastly, I got the threads for my next project, which will be LotR-themed and mostly text, colours on black...so I played around a bit and ordered this wonderful colours of Nina's hand dyed floss from Hungary. Can't wait to get going with this <3 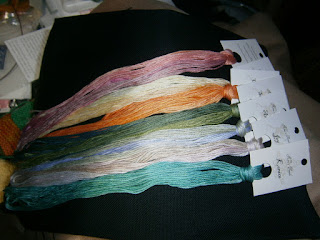 Oh boy, has it really been another month already? I still have soo much to get done for Christmas and the time around it; why do I fall into this trap again every year? That's right, because I'm loving it, but I still get a bit of ranting time, right? Right? Anyways, let's have a look at what I've been working on lately.

Last week, I was focusing on getting that first of four hats done I was working on. It's still missing the pompom, which I will be adding once I have both hats of the same colour scheme done (so I can just use the left over yarn), but I am happy to report that it fits my head perfectly, and I can go from here to see how I need to adjust size for the other four. I also love knitting with this yarn, it's a really soft pure merino wool, although knitting with four balls at once (since you take the yarn double) gets a bit messy at times. 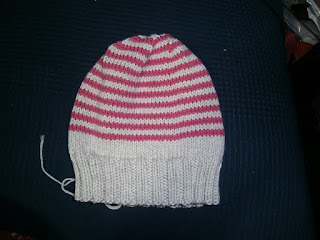 Then over the weekend, I tried my hands on my very first pait of baby booties. I found a lovely pattern on ravelry that was a real joy to make, and I was even able to use left over yarn from my baby jackets - I was playing extreme yarn chicken in the end, but it was *just* enough*. I'm not so sure about the size, though; this is supposed to be the new born size, and even though I think I'm knitting pretty tight already, it feels more like a 3 month size. Not too mad about it though, they will grow into these!
These weren't on my list before, I just found out a bit ago that yet another guy from work is going to be a father soon - in fact, this month, so I had to whip something up quickly! 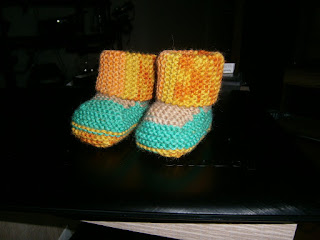 Not on my list, but 'just for fun' (not that stuff on the list isn't fun as well!) I also continued working on the current page of the Fire and Ember SAL and got two and a half colours done now. Not very much left to fill in! 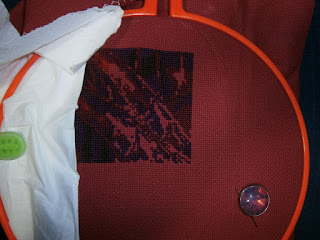 Now, the list...let's look at the current progress!

As you can see there were a few changes - one scarf is reschedules since I still haven't got the yarn, and probably won't get it before at least November, a few things were added (and then a few more I can't talk about here since people might or might not be reading this blog!), some plans have changed, but I still have quite a bit left to do. I'm still positive I can actually make it, though! ...and then I'm already making plans for projects that are due later, say March/April...never ever learning, this one!
Eingestellt von Leonore Winterer um 14:23 8 Kommentare:

Starting the month with a scare...

...and not because Halloween is approaching! After my last update, I happily went to prepare to start the next page on the Fire and Ember SAL...unfolded my fabric to move the hoop...when I saw IT! 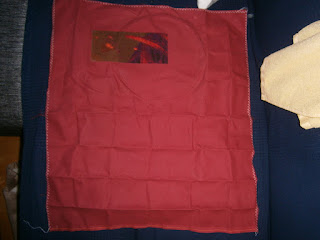 Something no stitcher ever wants to see...that fabric is supposed to be landscape, not portrait! Stupid me has started the wrong way around, and those three pages are not even halfway the width...no way it's all going to fit. Needless to say, I was devasted, my mind went from ripping it all out, to immediatly ordering new fabric, to just dropping out of the SAL, because let's face it...I would never be able to catch up if I had to start over. But gladly, I'm not one to easyly fall into despair, because after a while and a little pep talk from both Felix and my girls, I got myself together and started to think about solutions. Clearly I was not the only stitcher to ever fall into that trap, and I remembered reading what advice people had for them - that with a fullcover design, I could probably get away with stitching to the edge and attaching another piece of fabric. I found to promising ways to do that, and I stitched little swatches for both of them.

The first try was just overlapping the two pieces and stitch over the edge - works pretty well, probably because it's aida instead of linen, but so is Fire and Ember. I think I will go with this one, but I still tried the second method, which is stitching on two seperate pieces of fabric and sewing them together. This would probably look pretty good when ironed, but with the small test piece I'd probably have burned my fingers, so I didn't. I still think I'll go with the first method, when it's time, and continue stitching as usual until then. 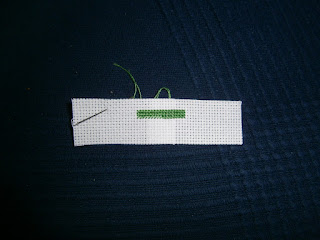 So, the 4th page of Fire and Ember was one of my focus pieces during the last week, and I almost finished stitching the first colour. Again, this feels like almost half the page, but it's probably a bit less. Still, nice progress for just under a week! 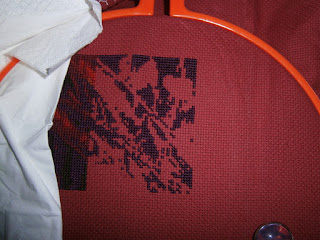 My second focus piece was my little Christmas Panda, and I'm happy to report the first finish of the month here! At least, a stitching and beading finish. I had a ton of fun with the beads, and those special-red beads (there are three of them) are really awesome as well. I'm putting of the finish-finish because I'm not sure how to do it...the kit came with a magnet, but I'm leaning more to finishing it as a hanging ornament. What would you prefer to receive? I'll probably wait until the second one is finished as well (a little Polar Bear), then finish both in the same way. 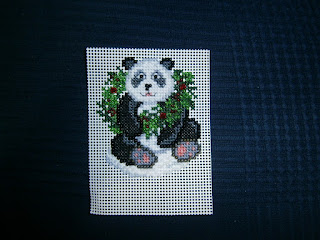 Since I was at a workshop and a few presentations for work this week, I also had a bit of time for knitting, and I took my newst Baby Jacket with me - made quite a bit of progress, I'm at three times as much as before now, more than halfways through and almost finished with the first skein of yarn. 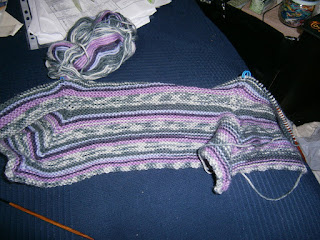 Next up, more work on the Fire and Ember SAL and finishing that first hat I started knitting. See you (hopefully) soon :)

A long and lazy weekend

Finally, things have started to calm down a little. We still had a busy week at work - with hope on the horizon that we can finally take out vacation time at the end of this month - but a deliciously lazy weekend with an added holiday today has really helped us to calm down and relax. In fact, we weren't even *that* lazy and got some long due shopping and chores done, but I'm still feeling much better, and had time to make some decent progress on my crafting as well!

I'm still working on way too many things at once, and I'm trying to bring that down to a quick rotation of two, at most three projects at a time. That way, I should be able to see some finishes at a reasonable rate and get through my big gift-list much faster! For the moment, I tried to get all my projects to a point where it would be easy to leave off and pick them back up when it's their turn.

First, I finished the current (7th) page of Cut Thru Cottage. This one was stitched up fairly quickly - the last two are almost fully covered, but I still think I can get this finished this year. Lots of fun as well, I'm already thinking about which of those to get next.
I also fully finished the second part of the Halloween SAL - I know I had the motif itself done the last time around, but now there is also the beginning of the border and a good part of the inner grid to be seen. 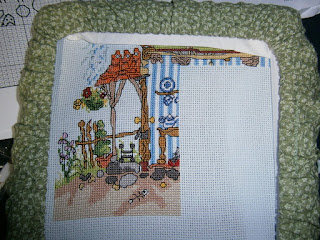 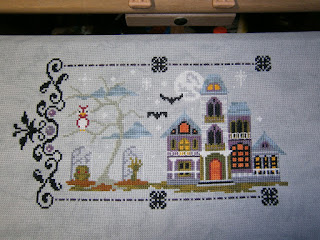 I continued workingon my little Mill Hill Christmas Panda, and finished the stitching - only the lovely beads to go now! And since I got my latest yarn order in, I could not resist a new start, the first out of four hats I'm going to make for this winter. Since I wasn't entirely sure about the gauge, I started with my own, since my head is always readyly avaiable for size testing. 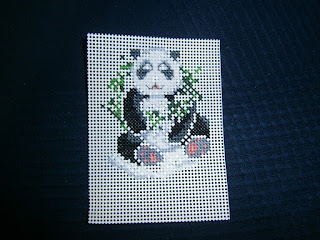 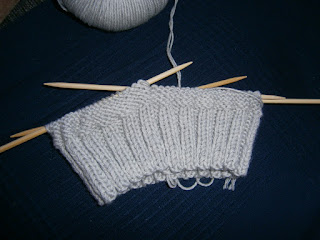 Last but not least, something I could have shown you the last time around, but it still needed a finishing touch! Saturday last week I went to a 'Sew your own shirt' workshop with a coworker/friend of mine and this is the result! I am so very pleased; I was really scared to sew with that stretchy fabric and it was so much easier than I had imagined, and a lot of fun as well! If I ever get my desked straightend up, I am sure I will do some sewing again soonish. 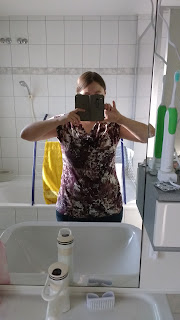