So I finally got around to writing this last post of my holiday-series...and I'm only late by about two months! I'm sorry, I know writing this seems a little pointless by now, but I really wanted to bring this to a proper end. Now I don't suppose this is going to be a particularyly interesting post either - from what I gather, New Year's Eve is celebrated in a very similiar day in most of the western world - but nevertheless, here we go:

Just like Christmas Eve, New Year's Eve is no real holiday, although many people will get off work around noon, and many companies are closed between Christmas and New Year anyway. But while on Christmas Eve even the restaurants close up early, those will usually stay open on New Year's eve, many hosting parties for the celebration. It's not a strict family holiday either - many people will celebrate with friends, and there are even some 'mass parties', like in Berlin, where hundreds of people gather to celebrate the new year together. There usually is good food - often a 'social' meal, like raclette or fondue, where the food is prepared and eaten right at the table, and the room is decorated with streamers, which sometimes looks really funny when the christmas decorations are still up at the same time. There are also many symbols of good look - four leafed clover (either fake or actual life ones in flower pots), horsehoes, fly agarics, chimney sweepers and pigs (those are often made of marzipan), to get as much good luck for the new year as possible.

There are two traditional ways (that I know of) to pass the time until midnight, although I, personally, have only ever participated in the first one, which is watching Dinner for One. If you don't know it, it's a British short-comedy about a Lady and her butler and the celebration of her 90th birthday (curiously enough, it was first produced in Germany, even though the script and the actors are English). For the last fifty years, many television channels will broadcast different verions of the sketch (there's a German translation, and even a few versions in different dialects), and many families will watch it at least once on New Years Eve.
The other tradition I know of is orcales, especially 'Lead Pouring' - a small portion of lead is melted in a spoon over a candle, then it's poured into cold water, were it will set again in different shapes. Those shapes are then interpreted as omens for the next year - we've never done this, but my grandparents did when they were younger, and it does sound like a lot of fun!

Then, when midnight is approaching, everyone is getting ready, pouring champaing to toast with right as the new year begins, and starting the countdown. Right at midnight, the fireworks set in - they are only sold once a year, between Christmas and New Year, and some people will *really* go all out with tons of fireworks. Actually, there's usually some cracking and banging throughout the day, and even the days before, since some people can't wait, but the real fun starts at midnight, and often lasts for an hour before everything has calmed down. Afterwards, we will go in for tea and the New Year's Pretzel, and this is where the circle closes with my first post from January 2015.

Thank you so much for embarking on this journey with me, I had tons of fun writing about or holidays and learned a lot of specific details and history I didn't know myself. I hope you had some fun reading my posts, and that you wil continue reading my blog even now that this series is over - usual stitchy update is coming soon, I promise!
Eingestellt von Leonore Winterer um 12:25 5 Kommentare:

I know, it's been a while since my last regular post...thanks a bunch everyone for visiting with the Secret Sweetheart Blog Hop last week, I don't think my blog has seen that much traffic before and it really was fun :) Now, it's time for the Gifted Gorgeousness post of the month, and again I have a few things to show :)

First, in the 'gifted to me' category - a while back, Carla generously gave me her Kitsune kit by Unceonventional X Stitch - she loved the kit, which is super awesome (with magic guide fabric, nice small pages, and pre-cut thread), but she said she wasn't going to actually stitch it, and would rather see it stitched by me than sitting in her stash forever. Naturally, I had to start as soon as I got it, and even though I have other pieces to focus on, I'm still sneaking in a few stitches here and there; right now I'm about half way through the first page: 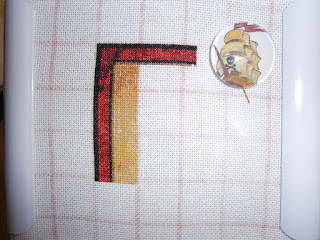 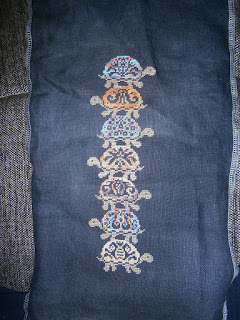 That pieces I *should* be focusing on (and mostly I am) are of the 'gifts I'm making' category. I'm still working on Turtles all the Way Down for my grandma, and I now have seve of twelve full sized turtles done; I'd say that is reasonable progress and I still love playing with all the beautiful threads: In decending order, we have #228 Indian Ringneck, #231 Bee Eater, #30 Peacock Feathers, #104 Rose Ringed Parakett, #229 Robin Redbreat, #232 Lilac Breasted Roller Bird and #71 Lovebirds. Three more unique colours to go, than I have to decide which one I'll use for a second time :)


I also made progress on the knitting front, we hade a few presentations this week which I used for excessive work on the second sock, and I managed to finish it yesterday. I'm much more pleased with the second one than with the first one, and usually I wouldn't be comfortable giving something like this away, but I did warn him that those were my first socks and he still insisted I make him some, so I guess it's okay - plus, the bright colours do a great job at masking some small mistakes. I also have enough of the yarn left to do a pair of really fun wrist warmers for my grandma! 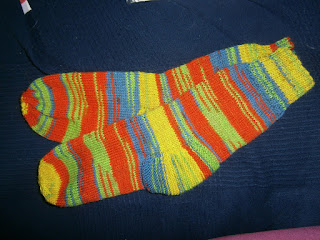 The last thing I want to show you is not GG related, but still something I'm really happ about - over the last year I had a subscription where I would get some 30 skeins of DMC each month for a full set, and during the last week I finally sat down to do the rest of the bobbinating - so now, I have a full set to pull from! I'm still doing an inventory of all the dublicate complete and partial skeins I have, and once I've done that I will hopefully be ablet to finalize the organisation of my stash ^_^ 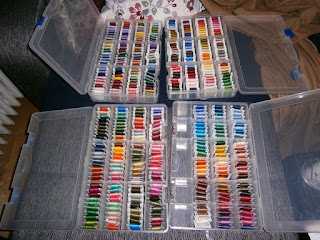 So much for catching up, I'll get stitching now and hopefully finish another turtle or two this weekend~

My apologies for being a blogging slow poke again...I've been really into gaming those past weeks, so crafting has fallen to the side a bit, although I'm still making progress. One of the reasons I decided to not make many plans, so I can just spent my free time the way I want to without pressure :) I will try, however, to catch up with your comments and maybe even get an update out later today. For now, this post is devoted to the lovely Jo and her Valentine's Day Blog Hop!

Each participant mailed her a picture of them appropriate stitching, and she randomly assigned everyone a picture to post. I get to post this lovely pair of sheep: 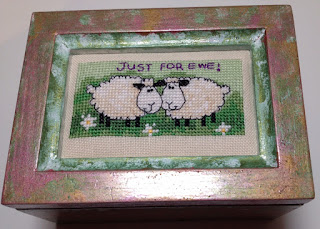 Aren't they adorable? If those are yours, please leave a comment below; I'll go hopping in search of my own stitching later today or tomorrow.

About that new project...

So, I've had quite some people ask me about the new project I've teased in my WIPocalypse post. I didn't mean to keep you in suspense, there's no reason to really, so today I proudly present (haha): Turtles all the Way Down by Ink Circles. It's a wall hanging and here is turtle #1, stitched in horizontal lines using Jodyri's #228, Indian Ringneck, on 28ct Nevermore linen. 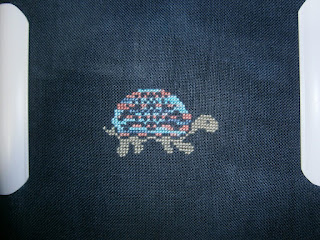 This week has started off very successfully...I've also started the second sock and finished the ripped part already! I hope I can continue to be that productive. 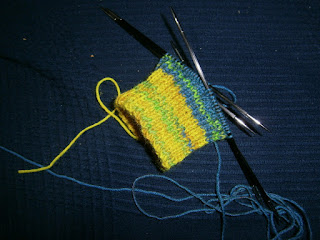