My friend Carla reminded me that it's time for the WIPocalypse checkin as well, and since I have some posting to do anyways, let's do that! The question of the month is: Do you use hoops, stretcher bars, lap stands or Q snap frames and why?

When I first started stitching, I used those classic wooden hoops, and since I didn't know there was anything else, I was content with those. Then I had my revelation of just HOW MUCH there is out there for stitchers, and I've done some experimenting. On a WIP on dA I saw someone using a Qsnap, and since that concept really appealed to me, I ordered my first one online, and stitching never was the same again! I really like those, how easy it is to attach and reattach them, the way they hold the tension, how they don't leave those dreaded hoop-marks (they do flatten the stitches a bit - that's usually fixed by washing, but especially when you can' or don't want to wash your project, it's best to put some fabric or a tissue between the stitched area and the snappy-part. Or you put the snap on upside down, so the back of your stitching is squished instead), and how thei are rectangular in shape, which makes stitching close to the edge of the fabric much, much easier. By now I have four of them in two different sizes and I still love using them.
When I started my first bigger project that involved heavy beading about two years ago, I got myself a set of scroll bars to use, but I was really disappointed in those. I just couldn't get then tension I was used to, and my stitched would lay right because of that. I've put them in the corner and haven't used them since, although there are projects for which is wish I was able to properly use those, they do have their advantages after all.
My friend Carla swears on the no-slip hoops they sell at Micheal's, so when my best friend went to Florida last August I asked her to get some of those for me, which she did. So now I am the proud owner of a set of four (or five? I keep forgetting) of these colourful hoops and the really are amazing - easier to attach than the wooden ones, hardly leaving marks and keeping a real nice tension. I still love my qsnaps, but these are a close second and I wish there was an easier way to get them here :)

Now, let's see what I've been up to since my GG post...as promised, I worked quite a bit on the new Baby Jacket and finally finished it yesterday, the finish-finishing always takes a while since I *so* don't like it. But here it is, and it will be given to the new-grandma friend of ours later today. 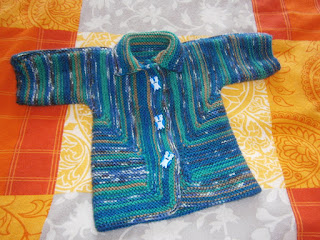 I also worked some more on Link for the Gamer's Delight contest. Here is is head all done, next are his sword and shield, then the rest of his body. I still really enjoy working on him :) 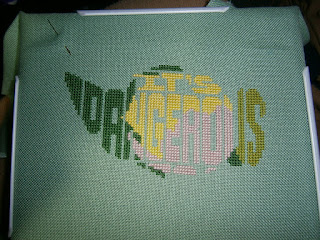 And last but not least, I finished the next column of Kitsune. There's the tip of her second tail now, so it's really starting to get interesting. 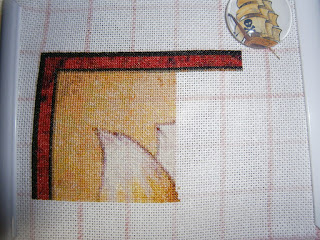 So that's where I'm at today - I'm also on the first day of a glorious seven days off work, with now big plans but relaxing and a bit of cleaning, so hopefully I'll get quite a bit done by the end of it :)

Posted by Leonore Winterer at 14:37 9 comments:

It's weekend again, so time for a progress post - and it's also time for March Gifted Gorgeousness, and since most of my progress falls into those categories, let's just combine them - suits me just right since I still don't really know what else to talk about here, life is as usual, maybe boring, but that's the way I like it ;)

So last weekend, my main goal was to finish Turtles All the Way Down into a wallhanging - grandma's birthday was on Monday, and I finished just in time on Sunday evening (not that it was that much work, it just wasn't as fun as the actual stitching and I ended up procrastinating a lot). Here it is in our apartment, by now it's hanging in my grandparent's hallway. I think she really liked it and wanted it on display somewhere where people will see it, and I have to say I'm rather proud of how it turned out myself ^_^ 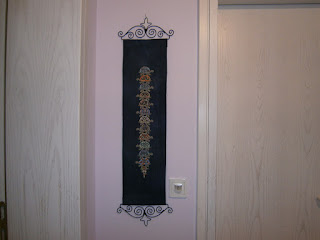 I also worked a bit more on Kitsune, which as a gift from Carla - I started page two, and finished the section of the border on the top. I am now slowly working my way through the second page of this lovely design. 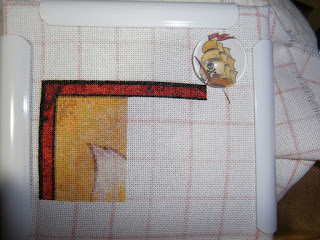 Now the third project I've been working on is a new start, and does not qualify for the GG SAL, but it's still to exciting not to mention - our Stitching Pirates Group on deviantArt is holding a contest on game-related stitching (either videogames or traditional games) and I'm to much of a gamer to not contribute something! So after much searching, I finally found a pattern I really liked on Etsy, and last weekend I started stitching it on a moss green Jobelan. It's been a really fun and easy stitch so far, so I got quite a bit done already ^_^ 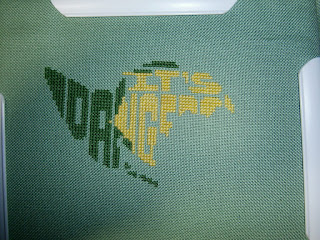 For this weekend and the week after, my plans are to contiue working on Kitsune and Link, and to finally finish the baby jacket I'm working on...I'll be having a few days off work for Easter, so hopefully I'll make some decent progress :)

Posted by Leonore Winterer at 20:41 7 comments:

Today, I have three different kinds of finishes to show you - two of them were already done much earlier in the week, actually, but somehow I'm only managing to post them now, so there's a third one to accompany them :)

First, I had a stitching finish on Turtles all the Way Down - here are the last two fullsized turtles, and then the smaller one trailing off into infinity. Right now, I am in the process of finish-finishin them as a wall hanging for my grandmas birthday on Monday, so hopefully I'll have a final shot to show you soon :) 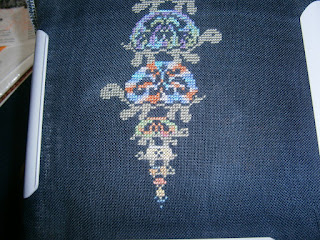 Next up, I put a few more stitches into Kitsune and actually had a page finish on her - you can clearly see the start of one of her tails now. Since the pages are pretty small, only about 40x60 stitches, I'm thinking I'll do one more page on this one before switching back to my other big project, Dark Force. 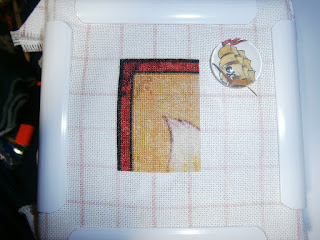 The last finish is on a small new start I had this week - the organization concern is hosting the Stitch for Syria event, where stitchers from all over the world are stitching a small free pattern and sending their squares in to make one big wall hanging for a place in Syria that teaches women and girls embroidery in order to earn them some kind of living, and here is mine, stitched on 14ct aida using DMS Colour Variations 4122. I'll iron it and take a new picture for the gallery, then put it in the post soon-ish. 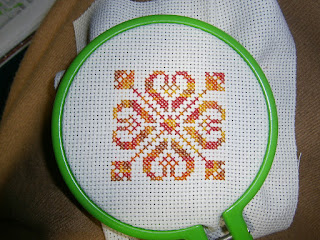 So this weekend, I'm working on the finish-finish for the turtles, but also on the second page of Kitsune, and then I had a new start I will share in the next update...lot's of great stitching going on here!
Posted by Leonore Winterer at 23:55 8 comments:

Last weekend, Felix and I visited his family - which was fun, albeit a bit tiring - so I had to put my usual stitching on hold for those days and take my usual travel projects with me, and I wanted to show you the progress I made before I can hopefully have a proper progress post on my WIPs later this week :)

In the car, I did a bit of knitting on my current baby jacket and I made quite some nice progress, although I'm still on the first skein so there is quite a bit more to go. 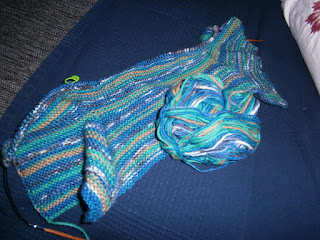 And then, of course, I took Lady with me again, and made quite some progress on her as well - not very impressive in pure stitch numbers, perhaps, but I got through quite a confetti-heavy bit (the man and woman and stroller in the upper right of the already stitched area) and started on the green area to the right of that, so the next part will be a bit easier and faster :) 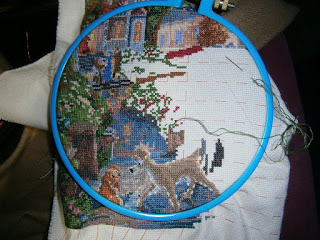 I'm back home now and working on Turtles and Kitsune, and hopefully I'll have something to show on both of these soon :)
Posted by Leonore Winterer at 20:21 6 comments:

Just a *tad* late this time..it's getting better! At least a bit. Anyways, time for February WIPocalypse. The question of the month is If you have any of your pieces on display in your home, which attracts the most plaudits? and well, actually...I do not have anything on display :( I'm stitching mostly gifts, so things I stitch for myself get often put to the side and, when I do finish something, I don't finish-finish them, and while I do attempt to change that, for now, I can't really tell you anything. I'm sorry!

What I can do is show you my most resent stitching updates...there's three more turtles on the wall hanging for my grandma, I only have one and a half weeks left to finish this so I better keep at it! 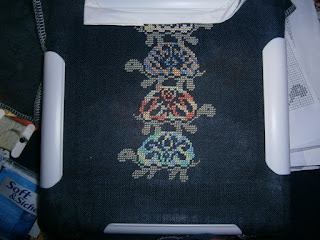 These are the last unique colours I will be using, so after this it's repetitions - two more full sized turtles, then a couple smaller ones.

I also stitched a bit more on Kitsune...one column, so about 500 stitches. What's exciting is that you can actually see something now - the very tip of the first of her tails! I'm aiming for a page finish here soon, it's just one and a half columns so I'll do it as one. 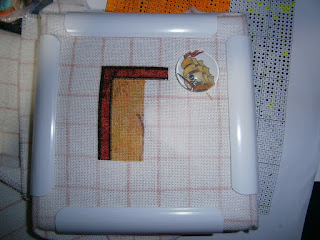 And...that's it! Don't really know what else to tell you as nothing exciting is happening at the moment, and I'm totally okay with that :)
Posted by Leonore Winterer at 20:50 7 comments: