Another try to catch up with TAC...Q is a difficult letter in all languages, I suppose, and German is no different, so I will have to do a bit of shoehorning. Take this WIP of Cut Tru Cottage (hopefully soon to be finished!). See that smoke coming out on the right? One word so say 'smoke' in German is 'Rauch' (probably the more common one), but you can also say 'Qualm'! 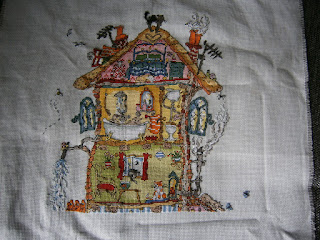 My word for this month letter is Quacksalber. A Quacksalber is a person who claimes to be able to cure diseases without actually being able to - I think the English equivalent would be a snake oil salesman. As I just learned, Quacksalber comes from 'kwaken/quacken' - today that is the sound a duck makes, but in older German it also meant 'to boast' - and 'salben', 'to anoint'.
Posted by Leonore Winterer at 16:08 7 comments:

April Gifted Gorgeousness - and a TON of catching up!

Hello my lovelies...I won't go into a long introduction now and right into the post, since I have tons to show! That's what I get for already being late with my update when the internet goes out for over a week. Thankfully our landlady is sharing hers with us now, so I can finally post. I hope you'll forgive me for just mashing everything into one update, even though not everythings qualifies for GG - I'll indicate in the text what does and what not :)

First (and non GG-relevant) I finished the April page of the Fire and Ember SAL -  my 10th page in total. This is doubly nice, because a) I'm done with the fixing of my mistake (this page was especially easy to fix with all the black) and b) it left me with two (one of which is still to go) weeks to work on everything else before I have to start the next page. 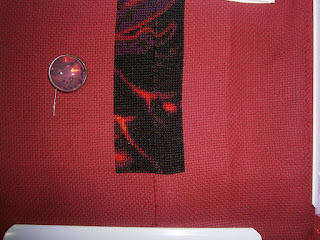 This is what the design looks like right now. The whole size is visible now, and even though I'm stitching on 18ct, it's quite a bit smaller than I thought it would be - just makes it easier to frame! I'll continue in the upper left with the second row, so officialle page 8, next month. 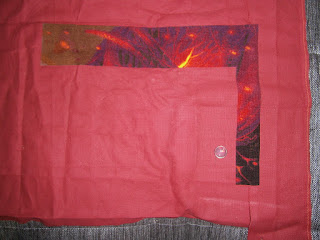 Next, I finished stitching the Bunny Biscornu over the Easter weekend. Aren't all those bunnies super cute? 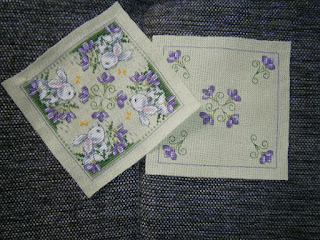 I was a little nervous about the finishing because I had never done a biscornu before, but it turned out to be much simpler than I thought it would be, and also really really fun! I'm seeing more biscornus...biscornue? in my future. This is even relevant for GG, because Felix loves bunnies and I decided it should be his. 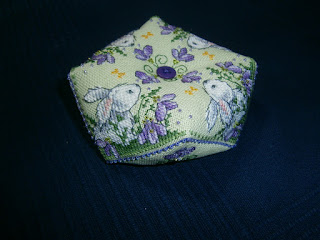 I took the bunnies to the hospital to stitch on, and I also finished my secret crochet project (that will stay secret for a while longer, but I will show you eventually!). So I could have been working on Felix' socks (and I did work on them...for a while!) but I also really wanted to start something new, so for the last day I took my first 'big' Mill Hill kit with me - Sophie Sheep. I really like how I don't need a hoop to work on those! I only got a little but done now, but I bet the next business trip will see some progress. 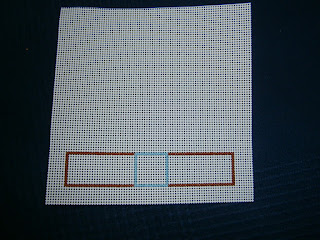 At home I started working on the 8th page of Cut Thru' Cottage. Felix' sister is already to starting to move into her new house, so I should really try to get this finished! I got a lot of the blue stripes done, and will soon start filling in the other colours. 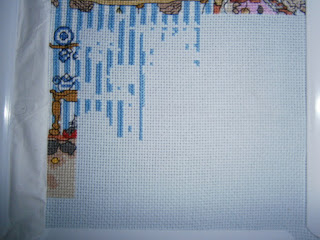 But the most work in the past few weeks went into the Mermaid Tail blanket...I think this is about 20 balls since you last saw it (I had to order some more), but the body of the blanket is finally finished! 120cm long and 110 wide at the upper end, but pretty stretchy (Felix can spread it with both arms and I think it can still go wider than that). It still needs a bit of work to be fully finished, but it should be managble now. 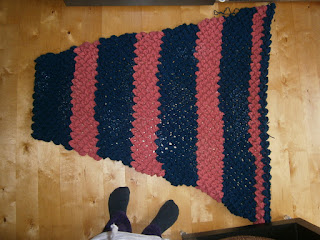 I also did get a few gifts! First, there is this lovely little Smile chart that I won in a giveaway by the lovely Tiffstitch in March. I think I'll stitch it up sometime soon, which is why I already got the little button that goes with it. 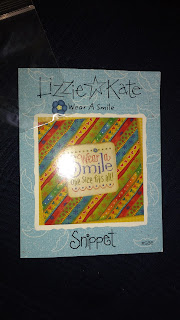 Of course, one can't order only one button, so I also got a few more things I needed, and since sewandso is having an offer at the moment where you get a suprise kit with any order over 25GBP, I got enough for that and a really awesome suprise gift! I never stitched a Kustom Krafts kit before, but I'm really looking forward to this. 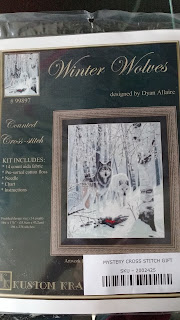 That should cover everything that happend...I don't know what will happen until the next update though, being almost finished with the blanket I want to work on everything at once!

Hello everyone! I know I am terribly behind with posting, but this time, it's not so much my fault...my home Internet has been down since Friday evening, so I haven't been able to post or read. I can do a little bit here and there from work, but I don't have my pictures here, so my GG post will be a little more late still, until Internet operation resumes. For now, have another TAC catch up post and a quick health update: I'm feeling a lot better, thanks for your good wishes, and Felix, who seems to have caught the same cold-bug as me, just a few days letter, is getting better as well. Grandpa came home on Tuesday and is very happyly hopping around on his crutches, looking much better since he's out of the hospital - soon we will be hard pressed to keep him from doing too much too early again!

Now for 'P', some stitching I can share with you is this Pusheen the Cat I made on an apron for a friend a few years back. I made the pattern myself, using the facebook-sticker-gif and gimp. 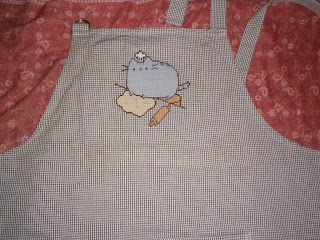 I can't think of a good unique 'P' word, so again I'm going with one that is 'typically German' - one cliché about Germans is that we are always on time, and the German word for 'on time' or 'punctual' is 'pünktlich' - with our own fun 'ü' sound (we also have ä and ö - those three are called 'Umlaute' - you can also write them as ae, oe and ue, and following German pronunciation, that is also pretty close to how they are supposed to sound!)
Posted by Leonore Winterer at 16:38 7 comments:

Es each year, Jo vom Serendipitous Stitching is hosting her famous Easter Treasure Hunt, were you just follow through one blog after another, collecting letters and looking at pretty stitching on the way!

I was stitching Joan Elliotts Bunny Biscornu for this event, but sadly, with my grandpa being in the hospital and me being sick (he's getting better all the time and will hopefully be home on Tuesday, thanks for all your well wishes!) I didn't quite made it. I did finish the first on the bunnies yesterday so I'll have something to show, and I hope I will get it all done over the Easter weekend so I can update later, but for now there is one really cute bunny! 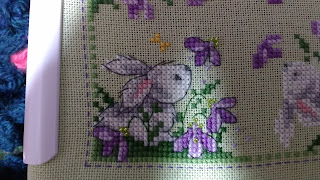 Now the next stop of the Treasure Hunt is over at http://bethsneedleworkstash.blogspot.com ! I wish you a happy Easter weekend, and happy hopping!
Posted by Leonore Winterer at 13:32 27 comments:

Hallo, lovelies...I know I am being terribly late, but when I though my life would become a little quieter now for a few weeks, I was obviously wrong! We did spend a wonderful weekend with my best friend to visit the zoo and the book fair, and after that, things did return to normal for about a week (and a wonderfully lazy weekend at home!), and until here I might just have been to lazy to post. But then on Monday, my grandpa had a nasty fall and is in the hospital for about 10 days (hopefully a bit shorter), and grandma is alone at home, so we were kind of rotating between work and hospital and her home those last few days. I do have a few things to show, and I want to, just keep in mind that those picture are not all up to date, but have been taken at various stages throughout the last few weeks when I thought I was going to post them!

First, the question of (last) month: What stitchy blogs, groups, or flosstubes do you follow and why?
I follow a ton of blogs of people I enjoy reading from, way too many to list, and also a few 'official' blogs from designers. On facebook, I'm in a few general cross stitch or crafting groups, but mostly, I follow along with designers and SALs there. I do not watch a lot of flosstube, mainly because I don't have the time to (and way to many shows to catch up on as it is!) but I do try and follow my friend Carla on hers to support her!

No for stitching. On our weekend trip, I took Joan Elliott's Freebie Bunny Biscornu which I had kitted up (the pattern can be found on her facebook group), and I did finish the back (minus the beads which I didn't bring with me) and quite a bit of the front. I hope to finish and finish-finish this for Jo's annual Easter bloghop! 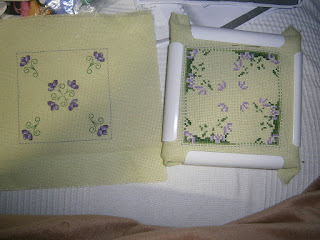 I can now also show you this iPhone case I have been working on for my best friend - she found the empty case in a craft store before Christmas and asked me to stitch something for her, and as she loves otters, I took this baby cub (and the reed) from a pattern by LittleBeachHut and also added a few waves to the empty looking background. I finally gave it to her and think she liked it! The phonecase was much easier to stitch on than I thought, but I still want to do the whole pattern on fabric eventually. 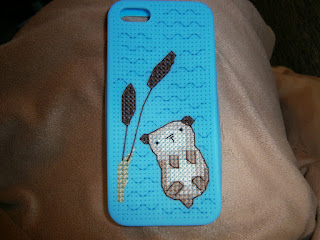 This last weekend (that I spent at home), Jody from Unconvential X Stitch called out a SAL to see how much we could stitch, and I participated by catching up on the Puppeteer for a a bit (about 300 stitches - I have now finished the first 10 metres of black, but I'm still quite a bit behind, and didn't get to work on him all week). 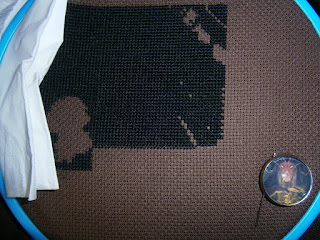 I also started the April page of the Fire and Ember SAL - which was also just black for now! But it's going quickly and soon I'll be done with the fixing all together, so I'm not complaining. 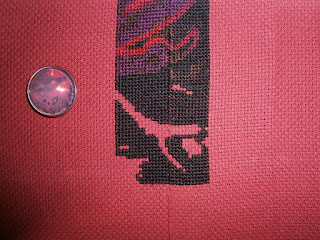 I also have some progress on the blackwork to report. Maybe, if I'm not finding much time for anything else, I can at least use the extra time at grandma's to make more progress here! 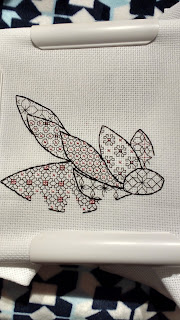