I almost forgot I hadn't done this yet this month! Now I can't decide if I'm late...Jo's Linkup Widget has expired, but it's still June.

Either way, I'm just going to drop a really quick post her - I don't have a lot to show on the subject of mermaids anyways! In fact, as far as I can remember, I have worked on two. One is Teresa Wentzler's The Mermaid, which I'm posting about all the time, and the other is the small 'The Little Mermaid' from Thomas Kinkade's Disney Dreams collection, which I actually finished a few years ago: 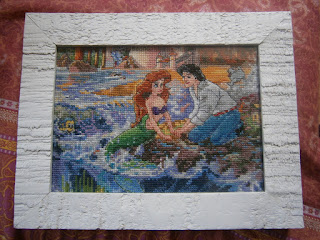 I gave it to a friend and I'm very happy to still see it proudly on displey everytime I visit!
Eingestellt von Leonore Winterer um 22:33 7 Kommentare:

Oh boy, I'm late...it seems to become a pattern that I want to 'just finish one more thing' before making these posts, but this time I just felt ma attention slipping away from my original plan and on to other things, so I guess it'll just have to wait until next month. I have enough gift-related projects to show as it is, anyways!

For one, I did stitch to smalls for birthday cards. You've already seen the little bunny, but I also stitched a little otter (it's a chart from Lesley Teare and I think it was released on the Crossstitch for Charity facebook group). 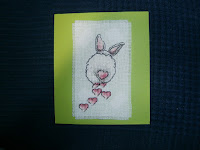 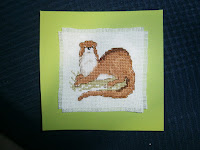 Then I finished and finished-finished the blanky Panda for a friend's friend's daughter. I haven't finish-finished the Hippo yet as the Panda actually had to be done earlier, but I hope to get to that soon (I just don't enjoy the sewing together part!). 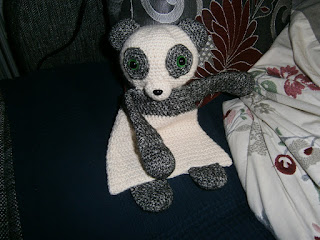 My main project is, of course, still the Mermaid. it's till progressing slowly and it's now clear that I won't be making the deadline of my dad's birthday party (which would have been July 6th), but I'm sure he'll still like her with a 'little' delay. Anyways, I still have a fair bit to go, but it feels like I'm slowly closing in on the page finish of page 3. 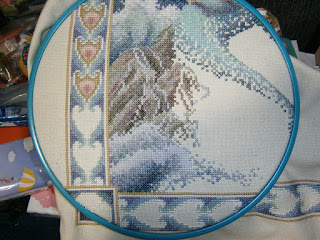 Despite not having finished the Mermaid yet, I still had a new start. After my dad, my mum, too, is turning 60 (next year in April), and I wanted to get a headstart on her present - a Mirabilia, and, even though it's my first one, it should go a lot faster than a TW! I'm talking about Lady Justice, and I managed a few stitches to start her this week. Lots of pretty greens to finish that skirt! 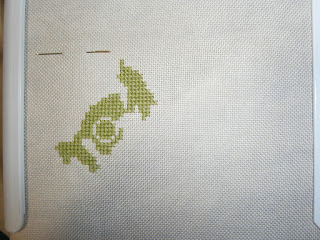 I also have a few more knitting/crochet projects in the pipeline, the first of which I'm hoping too start tonight sooo hopefully I'll have more to show next month (and hopefully I'll be more on time, then, as well!).
Eingestellt von Leonore Winterer um 16:30 6 Kommentare:

I know I am terribly late, but I had finally coaxed myself into trying a more 'daring' finishing method, and it took me a few days to get it done :D But now, without further ado, I present you my first ornament finish! 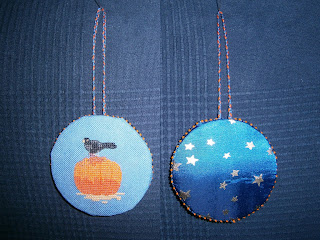 I finished the stitching last year for Halloween, and now it was finally time to get it done. I loosely followed this tutorial, but did a lot of improvising where I was missing the right material. First I cut two circles from sturdy cardboard, then, missing the right kind of batting, I put some filling material on the circles and ironed thin interfacing over it. I laced both the stitching and the backing fabric tightly on the back, made a braid from some cheap craft yarn for the hanger, and glued both sides together. Lastly, I sewed across the edges, because I didn't quite trust the glue AND I love me some beads, which I added in the progress. It's far from perfect, but I do like it and I already learned a few things I could do better next time!

And for this pretty complicated (for me at least) I also had a super simple one - for a friends birthday, I stitched a little freebie by Maria Brovko, and glued it to a card using double sided tape. (In fact, I made another one, but that has yet to reach its destination!). 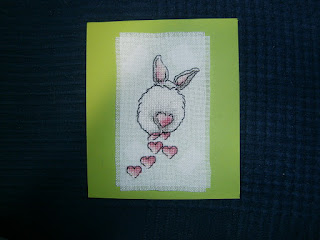 I am irrationally proud of my self. Maybe that's a good sign for next year?

Here we are and back for another month of the 'Finish it in...' SAL! I'm linking up with my friend Magical for this one. My list at the beginning of June looked like this:

and I worked on three of these projects, finishing one. I picked up the Half Granny shawl for about an hour and a half, which was just enough to put in the remaining two rows (before I ran out of yarn) and weave in the ends. I used 3 balls of yarn (each 400 meteres) in total, and it's huge and warm and cuddly - jsut what I wanted! 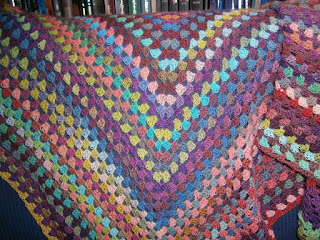 I made decent progress on the Mermaid and just finished the second page, meaning all the cross stitch in the upper half is done, and then some. I also worked on Whacky Witches, finishing the upper left block. 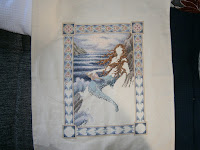 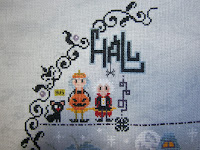 I should have realized this last month already, but the Mermaid is the only one of my original list that isn't finished yet! I am making good progress.

So that leaves the 'giant knitting/crochet project' slot open on my list, and I'll be filling it with Viajante - my lovely big scarf-hoodie-cowl thing that I've been meaning to finish for years! It's a gorgeous, rich, dark purple that makes it terrible to photograph (at least when I'm trying to blog in the middle of the night), but believe me when I say there is quite a ways to go yet: 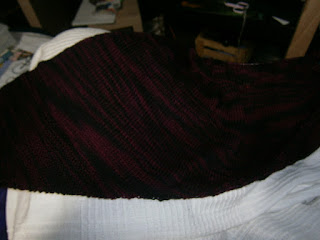 For the last two weeks or so, I've pulled it out to get at least one round in each day, and I think at that rate I might just be able to finish before the end of the year...but maybe I can speed tings up a little!

Another month over, and it's time for a new stitchy pie! I have to say, May was pretty productive for me - I tried to focus on the Mermaid, and while I did not quite manage my goal of at least 10 hours a week, it was close. I also got in a good deal of crochet and a little knitting: 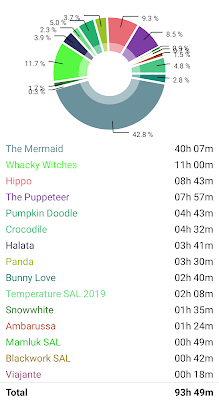 You've already seen most of these projects...or you will be seeing them very soon. What I haven't shown recently were Snowwhite and the Pumpkin Doodle. Both came out to play for some Magical Stitches Homework, the former for 200 stitches in yellow, the latter for 700 stitches on project #17 on my WIP list: 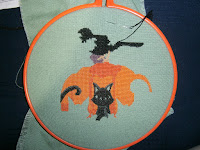 I already made a good start for June, so hopefully it'll be just as productive!
Eingestellt von Leonore Winterer um 21:49 5 Kommentare: