It's been a couple of years now that I first discovered the prettiness that is English Paper Piecing - all those hexies and diamonds and the pretty shapes they make! Ever since I saw it on Pamela's Blog, I wanted to give it a try. I even bought a book, but just never got around to do something. So when I had a week off in the beginning of August and nowhere to go thanks to the pandemic, I thought this would be a nice adventure to take on in the safety of my own home!
One of the projects described in the book was a little (or not so little) pin cushion/fabric weight, and since that didn't need a lot of supplies and seemed to be reasonably straight forward, I chose it as my first project. I picked out some fabrics I had originally bought to back cross stitch ornaments with (which is why they are a little flimsy, but they were still not too bad to work with) and set to work, and a little while later I ended up with this: 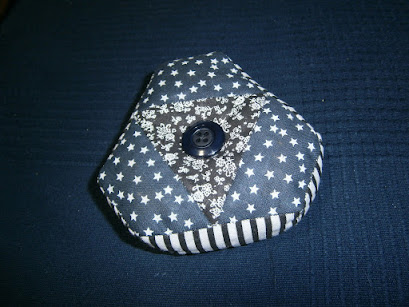 and a new addiction :D There is something incredibly soothing about sewing together all these little shapes. I splured a little, ordering fabric and paper templates for a couple of further projects (some I want to incoorporate my cross stitch finishes in), but for now I started another project I've been putting off for years - making a cover for my sewing machine! I bought these fabrics I loved age ago but never quite new how to go about it, and now I decided to just give it a go with a simple hexie pattern and worry about the details later. So I spent some time cutting the first 42 squares of fabric (I think I'll need at least three times as much in the end), basted them all and started the sewing: 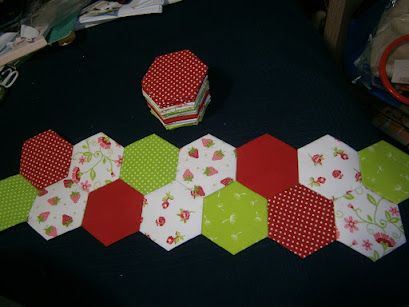 Still a lot of work to do, but it's fun an grows quickly whenever I can give it an hour or so! I think I stull have a lot to learn, but I am very much looking forward to the process.
Posted by Leonore Winterer at 22:15

Yay! You are right about it being soothing. A sewing machine cover is perfect for your next project!

A really pretty pin cushion, I like the blue fabrics and the matching button and also the lovely colours you have chosen for the hexie sewing machine cover, great work

Your pincushion is adorable. The hexies are looking great. I tried patchwork once and it formed a sort of bowl shape instead of being flat!

For a new hobby you're off to a great start! Both are really pretty, and useful! Good luck continuing the sewing machine cover. :)