I am terribly behind with everything still, but slowly making my way to catch up. I think what threw me off in May was a gift I had to finish, which I'll show you in one of my next posts. But now I finally finished my three SALs for May, so here we go!

First off was the Bookmark of the month. Magical designed a gorgeous rainbow coloured pattern on black, and I loved it, but it gave me so much trouble! I wanted to make the backstitch outlines red, but only remembered that when I had half of them done in blue. I misscounted several times, and in the end the middle row of 'hour glasses' ended up four stitches lower than it was supposed to be, which made it sit a little strangely inside the outlines, but I like how it looks and figures out a finish-finish to hide that (more on that in the FFG post!). So even with all the problems (and a total of 9:18h) I really enjoyed it and like the result. 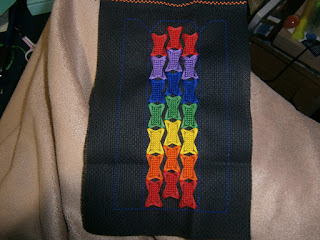 This one I actually stitched in May, but the other two I only got around to this week. That's 2:16h to stitch the monthly Blackwork - two full crosses this month: 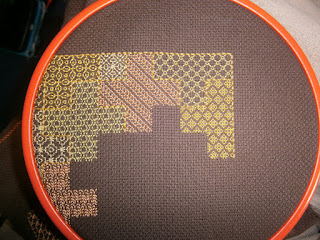 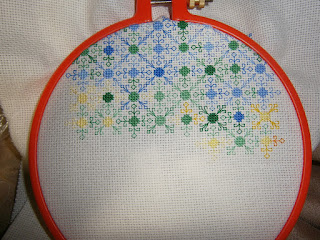 As you can see, May was noticably warmer - I actually got two new colours in, a darker yellow and even one day of orange! So far June has been pretty cold though, I hope we're not back in the blues...
Eingestellt von Leonore Winterer um 20:46

Wonderful progress on all three! The temperature project is gorgeous!

Three great pieces. So good to see some warmer colours appearing on the temperature SAL. That SAL and bookmark are such a contrast in colours to your blackwork. Looking forward to seeing another bookmark FFod soon. ;)

The bookmark looks great, so lovely and bright!
Nice blackwork and your Temp SAL is starting to show some new colours, pretty.

Your bookmark looks fine to me! I love the way the colours look on that black fabric too.