Everyone who knows me probably also knows how rare it is for me to post a WIPocalypse during the month it's due instead of early the next month, but miracles do happen, and here we go!

The question of the month is another repeat I think: Are you a seasonal stitcher? If so, which seasons do you find yourself more productive or less productive? I'm fairly productive all throughout the year, but I find that the way I'm stitching changes a little throughout the year. In summer, I am more into stitching and smaller projects that I can take on the go, as we are often traveling a bit and such. During winter, I find myself for drawn to yarn work, and those big massive projects that really require me to sit down and stay put!

Now on to The Loneliness of Autumn, my monthly SAL with Rachel, who doesn't have a lot of stitching time at the moment so hasn't checked in for a while. I tried to make up for that by being extra productive, and I got exciting news! Remember earlier this year, when I didn't work on this for about 6 weeks in late January and all through February? I've been struggling to catch up to my 'one length a day' goal ever since, and in early September, I finally did it! I did a total of 3030 stitches this month (a new personal best, I believe), finishing up the 644, doing all the 3820, and finally starting on the 816, another nice dark dark red of which I have only about 400 stitches left at this point. Next up will be 3051, a dark green so one of the less exciting colours, but I'll get it done nevertheless! 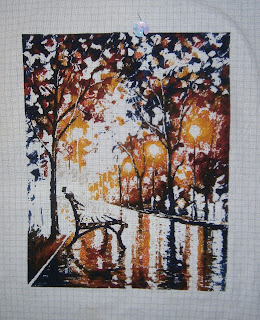 So my new total is 72,929/118800 stitches or 61.39% done. I'm starting to dream of seeing this one finished but of course at this point, that's still going to take another two years or so at my current speed!

October marks the last of the 'one a day' challenges of WIPocalypse. After 'finishing' my previous focus piece - getting all of the black into The Puppeteer - I was thinking about what to pick up next, and decided to give some love to my oldest WIPs. As you might remember, I finished *the* oldest - the tablecloth with the little houses and trees - earlier this year, so no this title is somewhat split between two other tablecloths (I can't really remember which one is older), so I just picked the one that requires less stitching to finish. This is the Meadow Tablecloth (not it's official name, it's a Rico kit and think only has a number). 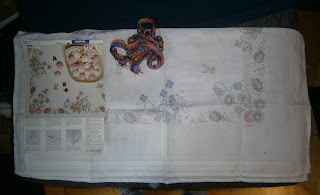 As you can see, I've barely made a start, but it's not a ton of stitching to begin with (mostly cross stitch, but also some backstitch, stem stitch, statin stitch and a couple French knots) so I'm hoping that once I make it through a month of one length a day, it will be close enough to a finish to keep going! Guess we will see how it goes.

Posted by Leonore Winterer at 16:19

Loneliness of Autumn is fabulous. One length a day is a great plan.

Leonore: You have put a load of stitches' in this design, wow.
Your new start looks like a lovely design, I am looing forward to seeing your progress.