Welcome to the September edition of Rachel's wonderful SAL which helps us stay accountable for all the projects that get stuffed into the box of shame! If I'm a little late this month (who am I kidding, check in was on the 10th) it's not really my fault; I've been asking Felix to frame this for months, and he actually did start on the 8th, but it was giving him some more trouble than expected! He finally got it all done yesterday night though, and I think it was really worth all the hassle.

So, what am I talking about, you're asking? I don't think I've ever showed this project on her before due to its somewhat secretive nature. My brother in law married his girlfriend in a very small ceremony last year, and we were some of the only people who even knew about it beforehand. Despite not being invited, I still wanted to stitch them a wedding sampler. Now I don't know her all that well (they met shortly before the Pandemic hit and we just haven't really had an opportunity to spend much time together yet), but he's a *huge* Lord of the Rings nerd, so I went after that, and did a little frankensteining, as my friend Carla would call it.

I bought two patterns - "The White Tree" and "Evenstar" from Ilutien Cross Stitch - that are the white tree of Gondor and Arwen's Evenstar amulet, surrounded by the script from the one ring, respectively. I rearranged the elements a little, added some text (it's the German version of Arwen's speech, 'I would rather spend one lifetime with you than face all the ages of this world alone') as well as their names and the date (blurred out for privacy reasons). Honestly, I am quite happy with how this turned out, and in October we will finally get to see them again and deliver this in person! 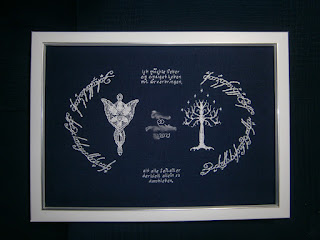 Posted by Leonore Winterer at 11:45

Congratulations on completing this beautiful and one-of-a-kind marriage sampler, Leonore! I'm sure you can't wait to see them to present it in person. Hope you have a relaxing weekend ♥

I hope you can meet your brother-in -law and his wife in October and have a good time.🙋

Leonore: What a grand idea to mix the two designs.

It's beautiful and I'm sure will be treasured

Oh wow, that’s amazing! What a shame I’m already married or you could stitch me one!
The Elven script is gorgeous. I am sure they will both love it.