Back from Prague, back to stitching

So I'm finally back from Prague (actually I am since Thursday evening, but I needed some time to relax and 'get down') and ready to tell you about it. I've actually taken quite a few more pictures than I'm going to use in this post, but I want to keep picture traffic to a minimum while still showing you what's been going on; also, my cute little cam is not quite as good as she'd like to be ^^"

So, our journey began early on Sunday morning, seven o' clock early, to be exact. University thought the distance was to small to justify paying for a flight, so we first took the train (one and a half hours) and then the bus (about six hours), waiting times in between not counted. So it was already half past six in the evening when we finally arrived at our hotel (a nice and clean family-run bed & breakfast, actually), and after recovering for a while we went out for dinner and a little exporing the surroundings. We were quite outside the city itself, so not that much to see, but we did discover an old water tower, we later learned that it has been in the process of restauration but then funds ran out and now noone knows what will happen to it: 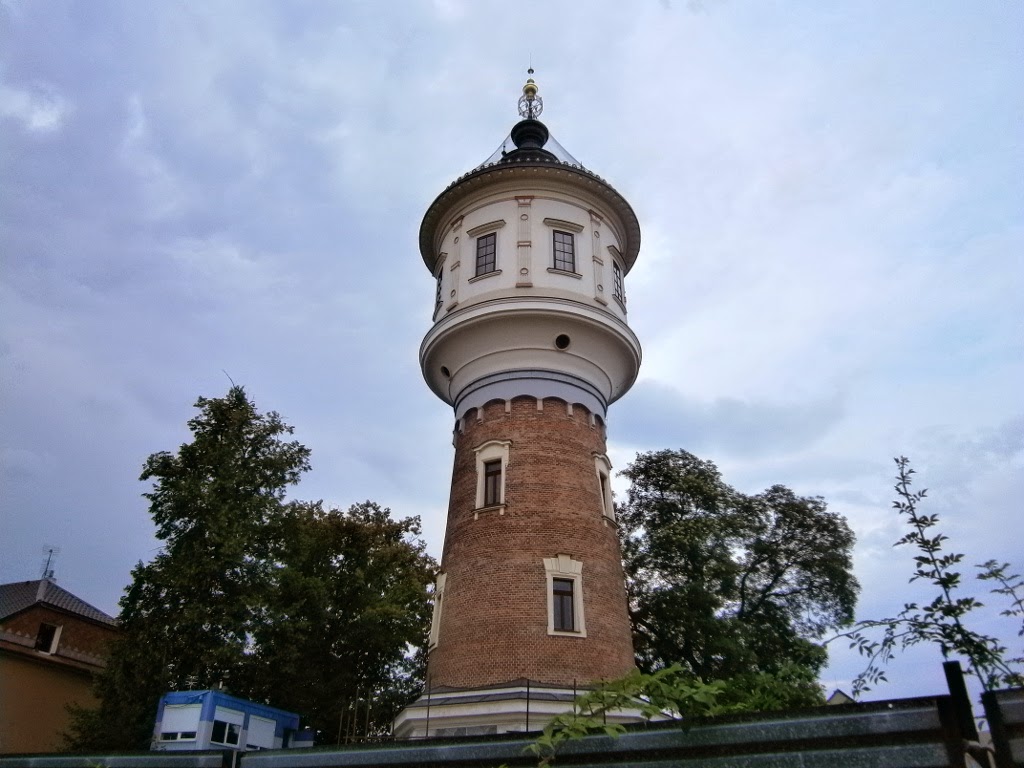 I wasn't able to stitch at all on the ride to Prague because I had somehow managed to either lose or forget the one and only needle in my travel kit, so first thing on Monday morning I persuaded Felix to go to one of the needlecraft stores Carla had looked up for me. Haberdashery Filium is located at the Palladium shopping center and a lovely little crafts store were I could get my needles no problem, but other than that I was a little disappointed - most of the stuff they sold was just the same as at home, only more expensive (in fact, a lot of the things I saw actually were German products) with the exeption of a nice sortiment of DMC floss which I have never seen at a store at home (they even have scented floss - what could one use that for?), which is nice to know, but also that was quite expensive. Good for me I guess, or at list good for my SFS budget! :D

After that we had a little more time before lunch, so we did some sight seeing in the inner city. We didn't have much time to prepare our trip, so most of the time was spent admiring pretty and old buldings without actually knowing what we were looking at. Here's one of the few we knew, the old Powder Gate: 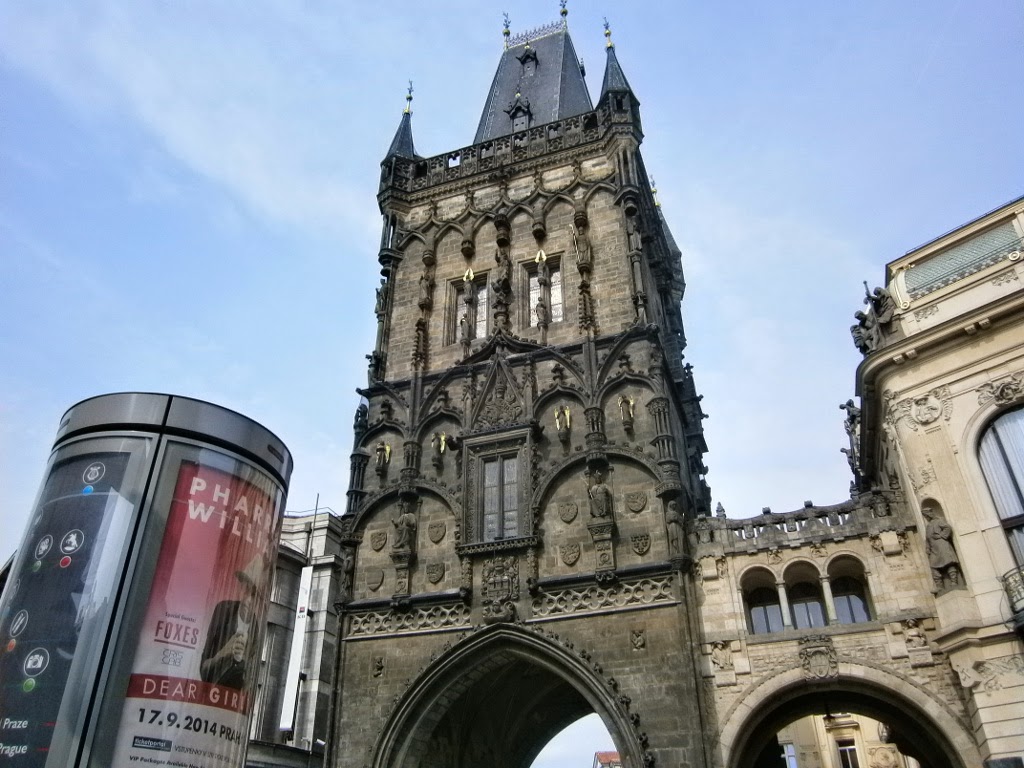 The remainder of the day was spent with out colleagues from universtiry - lunch, then presentations and discussions, then dinner - as was Tuesday up until the late afternoon, when all of us went on another sightseeing tour, guided by one of colleagues from Prague itself. He took us up to the Prague castle and cathedral - that hill was quite a climb, especially since I had the shortest legs by far! So this is the Cathedral, apprently the Czech crown juwels are kept there and only shown to the public every few years or so: 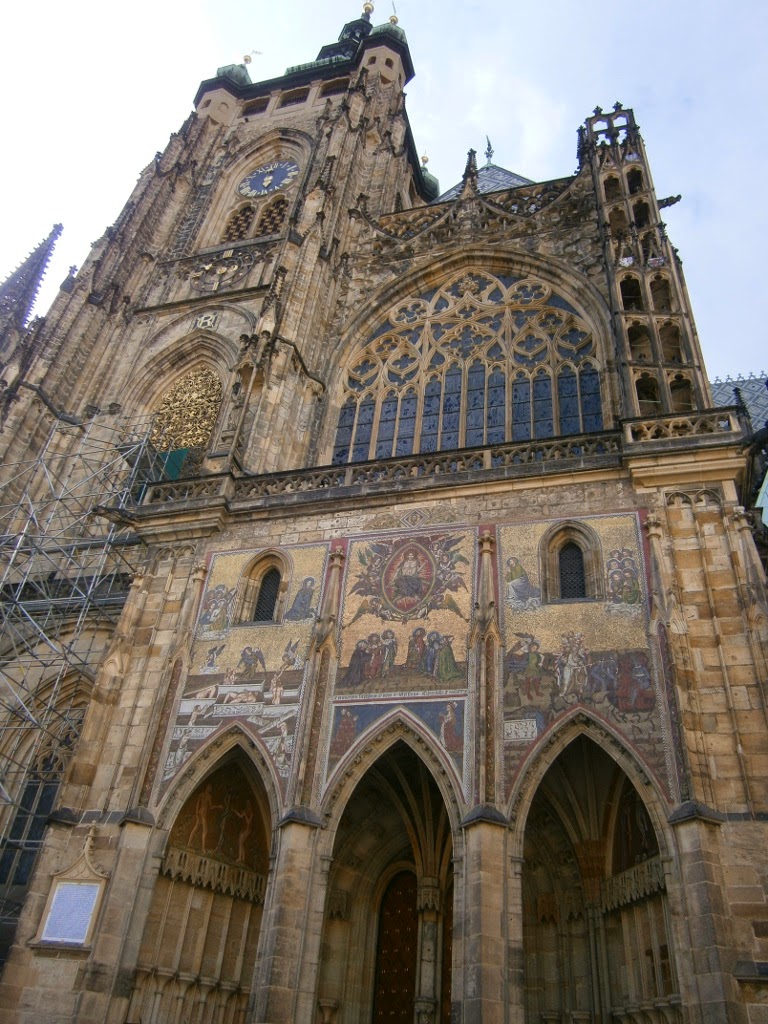 On our way down the hill we were suprised by quite a nasty rain, so we seeked shelter in a restaurant for a nice long dinner, then made our way home through nightly Prague, which was really impressive - sadly I couldn't take any pictures because capturing the spotlight-lit night is way beyond my poor little cam. I think the walk across the sparely-lit Charles Bridge might have been my favourite part of the walk - there were musicians everywhere, some of them quite good, it was really amazing.

After our university duties ended on Wednesday afternoon, Felix and I went exploring some more on our own. We wanted to visit some parks and Petřín Hill which is full of beautiful gardens, but it was raining again and we heard thunder in the close distance so we decided to stay safe and in the city and returned to our room not too late in the evening to dry and relax a little.

Thursday was spent almost completely with getting home, which took us almost twelve hours in total due to a few traffic jams and missed/late trains and such. But, after I hadn't beend able to stitch on the way to Prague at all (missing needle, you remember?) I tried to make up for that on the way home. GoT bookmars, Arryn, of course, as it is in my travel case at the moment: 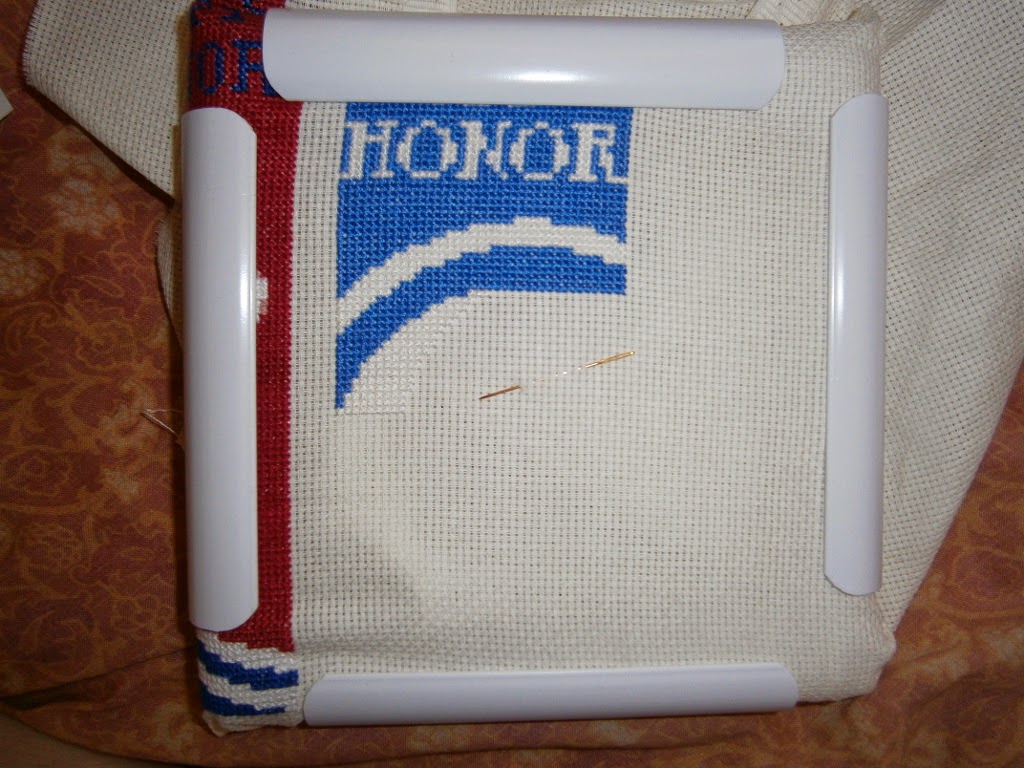 Now that I'm back home, I can finally try and concentrate on Angel of Frost - and I need to if I want to have any chance to finish it by Christmas! I do enjoy working on it though, and it helps that I don't really feel like doing anything else than watching shows and stitching at the moment. Here's were I was before I began on Friday, I'll show you the progress next weekend or so I hope. 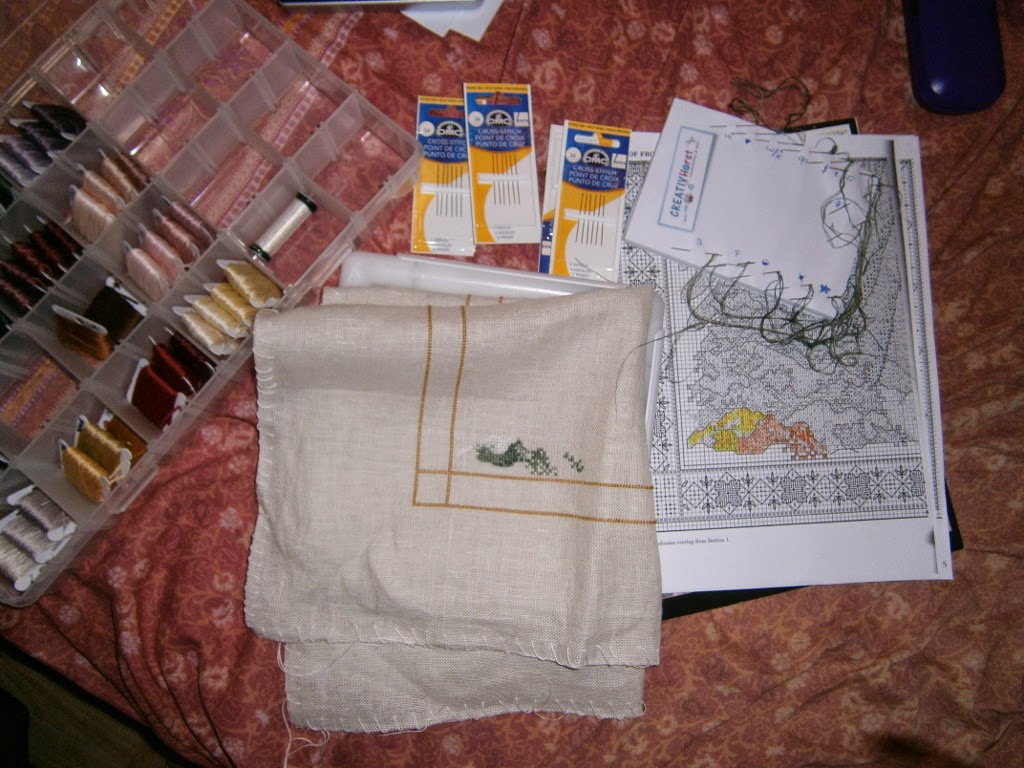 As I have a more or less quiet week to look forward to I hope I can also do some catching up with posts about my reading, watching and gaming, it's been quite a while and I still tend to hope that some people like to read that, I at least enjoy writing it...but for now, it's back in front of the TV and my Angel, see you later :)
Posted by Leonore Winterer at 15:03

It sounds like you had quite a bit of fun while you were there as well as the more boring "work" stuff.

Lets hope you can get a lot of stitching time in now :)

Glad you had such a good time in Prague, someplace I hope to visit eventually. ^_^

Hurrah! I'm so glad my search for stores in Prague worked for you! Nadel im Heuhaufen in Prague hahahahahaha! I should make a song for that similar to Wo ist der tisch tee hee! Horrible syntax and incorrect word usage and everything :D I think I will try it as a rap song or maybe to the tune of one of Rammstein's songs....like Reise Reise...yessssss

Your pictures are lovely which means Prague stays on my list of go-to places :D

I do love reading about your gaming, movie watching and book reading so PLEASE catch us up on that.

Oh, it wasn't boring at all, some very interesting stuff was discussed :) But the 'fun stuff' was fun as well, yep :D

I'm sure you will, but if you do don't forget to stop by in Germany!

Oh I can't wait for your Nadel im Heuhaufen song, I bet it's gonna be glorious! :D

I hope you'll make it to Prague one day, same thing as for Krystal though, don't forget about your friend in Germany if you do ;)