As (sadly) usual, I didn't get much hermitting done this weekend, but some stitching did happen, therefor I will post and use sad post to brag about all of last week's progress :D

While I was still at home, I continued working on Angel of Frost. I way only at home on Friday, Saturday and Monday however, so progress has been a little slower. As you can see, I worked a bit more on the tree, finished what red was left to do on this page and started on her wings, both on the right and the left of the tree. Those wings have a most delicate shading, mostly greys, but some purples and pinks mixed in, I don't hink the picture really does some justice. 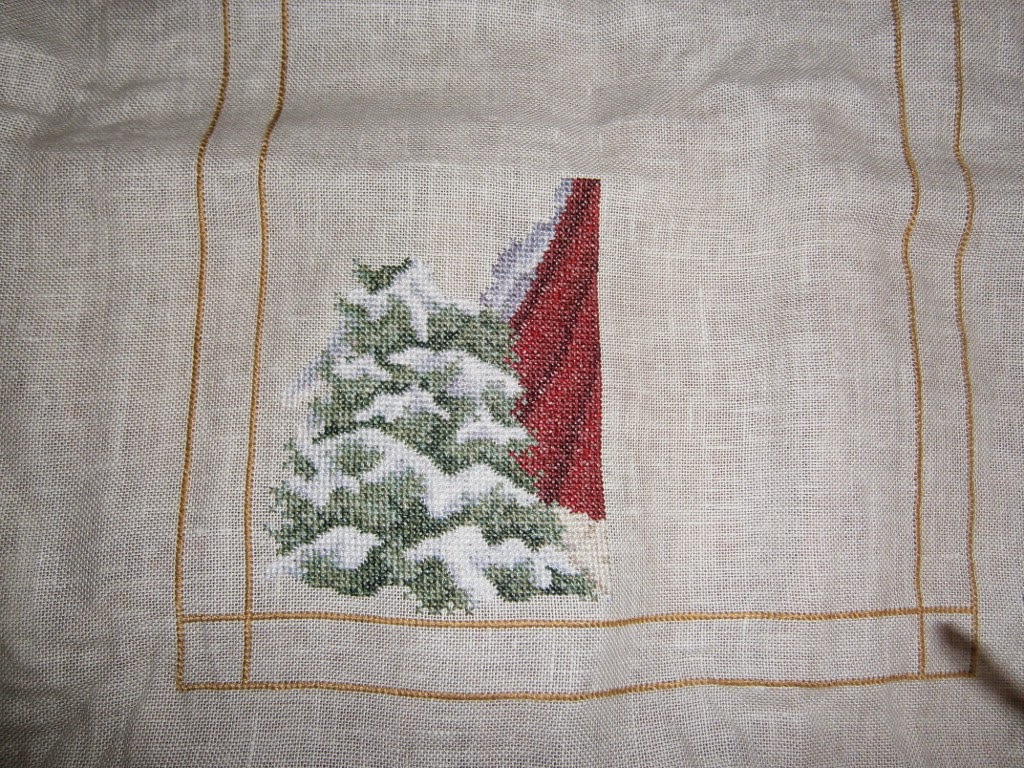 While working on this, some more watching happened as well, namely Bones S8 E15-24. We finished Season 8 now, and while it didn't have quite as bad a cliffhanger as Season 7, I'm still itching to see Season 9. Will have to wait a while longer though, it hasn't even aired in Germany yet.

We also watched The Pursuit of Happyness with Will Smith, which was quite enjoyable, but not realls as inspiring as people make it up to be. So hard work can make you successful if you get a bit lucky as well, who didn't know that yet?

On Tuesday, I boarded the train to Cologne, and really, I think sitting on a full train, headphones on and stitching away should count as some hermitting as well. I continued stitching an my GoT-bookmarks, and I stitched even more in the hotel, and then for movie night at Felix' home where I went on Saturday and on the drive back home yesterday. Made quite a bit of progress - a bit on the moon, all of the bird, and then some blue background as well. 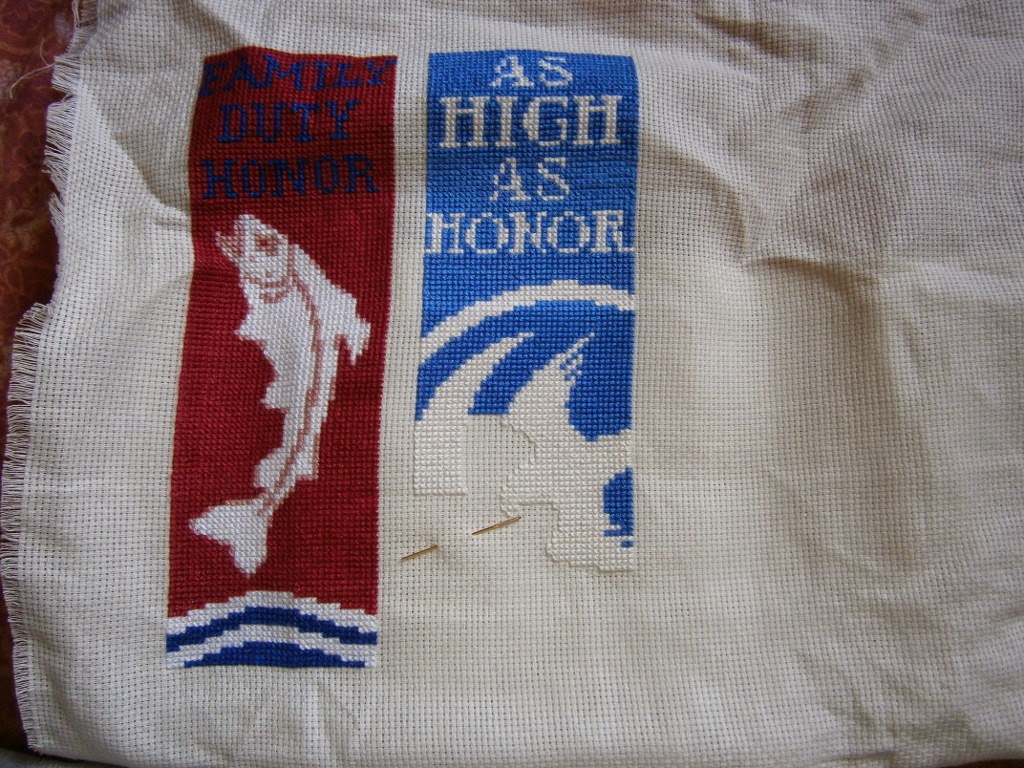 The audio book I listend to was a German one again, read by the author himself - Lehrerkind - Lebenslänglich Klassenfahrt (Teacher's child: A life sentence in schoolyard) by Bastian Bielendorfer. It's a somewhat popular book I wanted to read for quite a while, but frankly, I didn't really like it. It's kind of an autobiography, but I'm quite sure there more than a little exaggeration in there, both when it comes to the parents and to the other teachers and students. I guess some of the people were really hurt when they read how he described them. True, he was just as unforgiving when it came to his own flaws, which made for a few laughs at least, but still.

Cologne and the GamesCom were really awesome - it was much to crowded to actually see a lot of thing, but I got to catch up with lots of friends I only see once a year, and that was great. didn't get much sleep either, but sleep is for the weak anyways, right?

On Saturday (after a particulary long - or short, depending on point of view - night) I took a train to Felix' home, we spent some time with his family, went to his grandma's birthday on Sunday and finally returned here, were we intend to stay put for atleast two weeks now. Let's hope that really will happen, I got some work and stitching to do!
Eingestellt von Leonore Winterer um 14:24

Wow! Progress on the bookmarks is fantastic. You will be starting a new one pretty soon! More wings please...I love the Angel Frost so far, but I need more wings please :D

You definitely need some time at home with all the traveling you have been doing this summer!

Loving the progress you've made. Makes me feel guilty since I haven't really been stitching much lately. >.> Need to get on that but Pokemon X is kinda calling to me right now and it's soooo distracting!

Wait, it was IHSW? I demand a recount, missed it completely and am therefore celebrating next weekend, all by myself. The angel is going to be gorgeous.

It is looking good!

Both your projects look great!

Those are great projects - looking good!

I know; I thought it would take years to finish all of them the way I do it, but I'm not so sure anymore :D Another two or three trips and I'll be starting #3, I guess ^_^ And more wings coming right up, don't you worry!

I really do, but there will be some more traveling before winter...which makes me both happy and sad, but I shall survive ^_^

Don't worry, gaming is always a good excuse in my opinion :D I just don't feel like doing it a lot at the moment, therefor all that stitching, but priorities will shift again, for both of us, I'm quite sure ^_^

I was a little suprised as well, but according to grandmaster Joysze, it was :D I will celebrate with you again, finally a weekend to stay at home and be lazy (I hope)

Thank you so much; it feels really good to be concentrating on them ^_^

You know, I have downloaded that GOT chart, too! A fan of GOT, book & mini-series. :D

I love the books, and enjoy the show as well ^_^ The bookmarks are a pleasure to stitch!