Well, it's not a whole week since my last update, however, it is time for August's Stitch From Stash and I also have enough to show for another update, I think ^_^ But first, let me start with what I spent this month (both kits haven't arrived here yet so I just used the stock pictures of the ebay auctions for now): 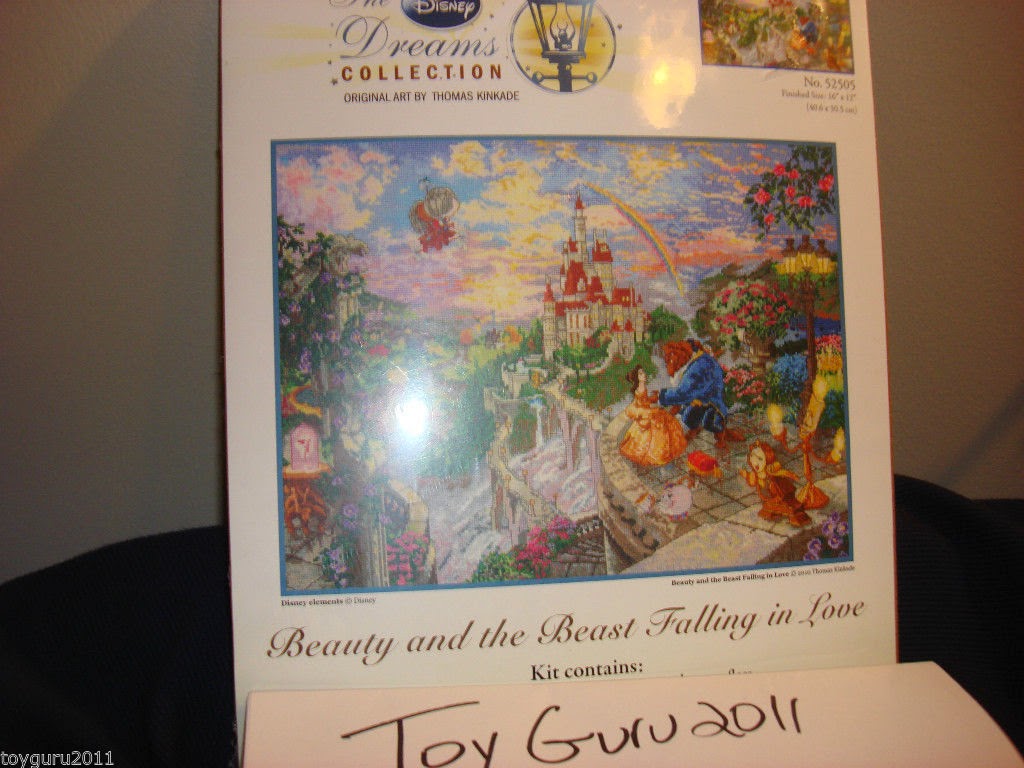 I'm still trying to get the Disney Dreams kits missing in my collection at a reasonable price (I might eventually buy them full priced just to have them, but for now hunting for sales is just too much fun), and when I saw a few of them on ebay I just had to order at least one - I also was in an auction for an awesome 4-pack, but it went too high for my budget, sadly. So, what I got is  'Beauty and the Beast Falling in Love' for $15.90. Don't let me get started on shipping, but it's still a fairly good price.

But as there was an $25 bonus this month, to by applied BEFORE the actual monthly budget of $25, I couldn't resist spending some more. 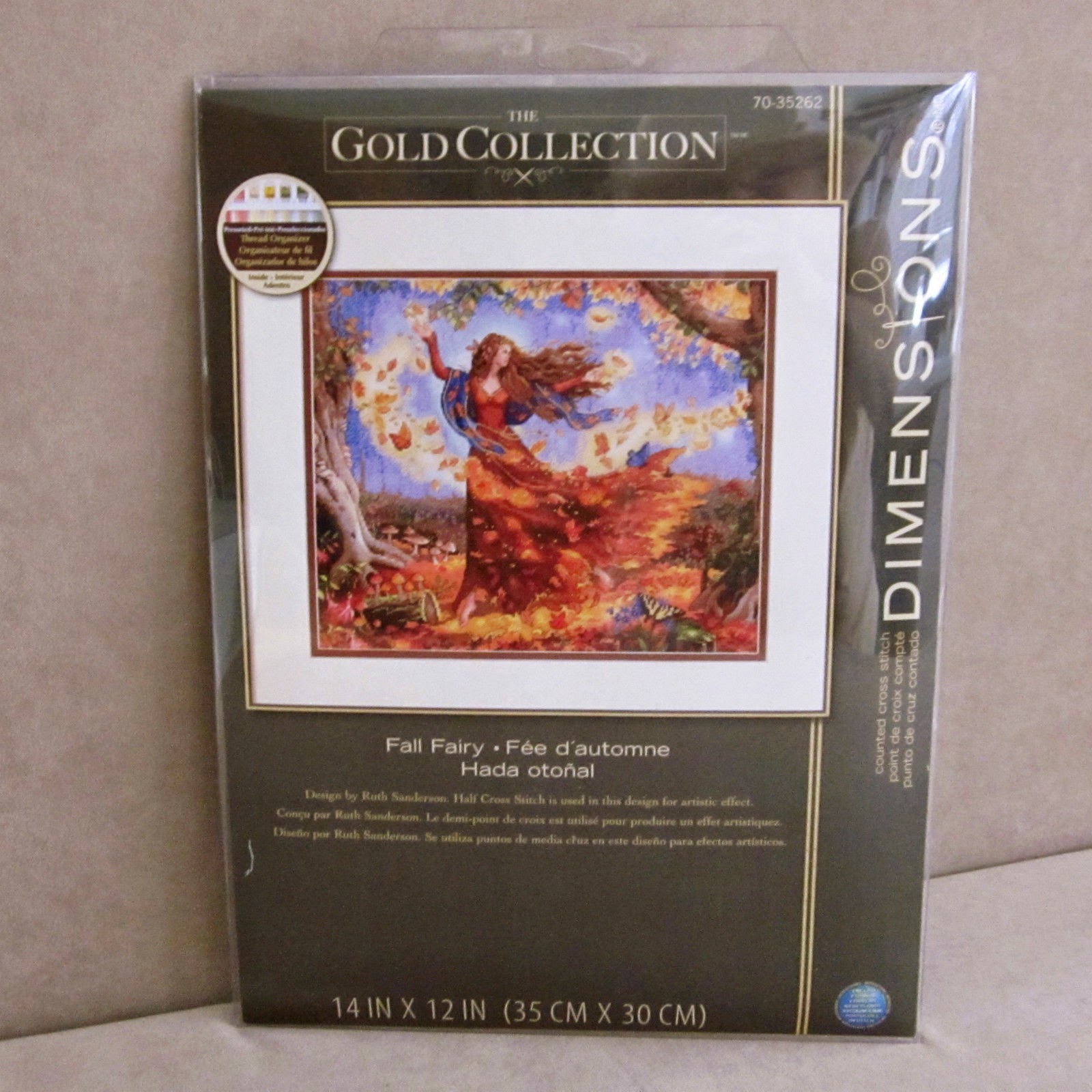 I was a little torn between getting some patterns I like, some fabric for patterns I already have or some kit from my wishlist, and finally decided to treat myself to the latter. So I startet roaming ebay again, and after finding some nicely priced kits that would ship to Germany at a reasonable rate I had Felix pick one for me (it might hang on his wall as well, after all) and he picked 'Fall Fairy' by Dimensions for $19.99. I never tried a Dimensions kits, and I hear mixed things about them, but I hope this will be good. If so, I'd really like to do her 'sisters', 'Woodland Echantress' and 'Aurora' some day.

So in total, I spent $35.89 this month, or $10.89 after subtracting the bonus, and I'm quite happy with my purchases, I just hope they will arrive here quickly and safe.

Now to my progress this week: My one and only focus has again been Angel of Frost, and I've made some good progress as well: I finished my first page (which is actually page 3) and started page 2 (which is actually page 1). I stiched lots of wing this week, but I also got to work on her gown a little again, which I adore - I'm really looking forward to starting The Enchanter eventually, it uses a lot of those shades of purple, which are just gorgeous in my opinion. 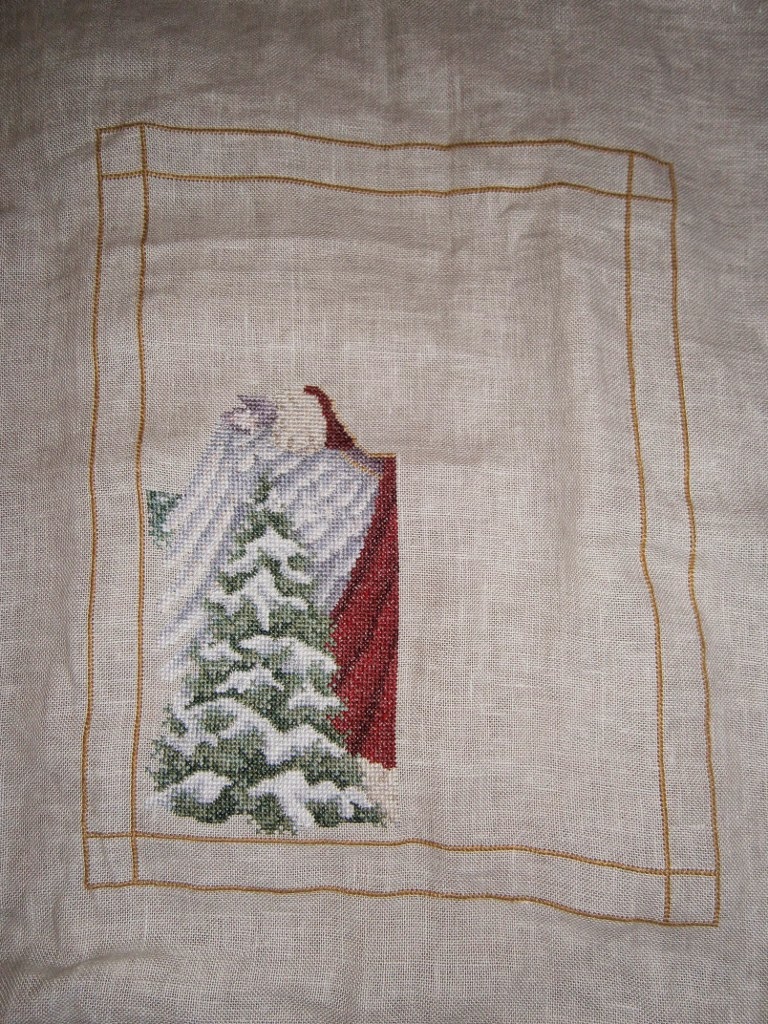 I have to admit that my motivation is fading a little...I'm suspecting the reason behind this is that the remainder of this page is almost entirely greens (more trees on the left) and white/grey/silver shades (about as much wing again as I've already done, snow on said trees and the moon) and only a little more red on her gown as distraction. I hope that I'll be able to pull though this page swiftly, then the rest of the pattern should be a breezs (well, kind of) as the remaining two pages are much more varied and I'm really looking forward to stiching them.

Of course with that much stitching, some watching had to happen as well. Felix and I started Season 2 of Breaking Bad (E1-4) and still enjoyed it. We also decided to educate ourselves a little and watched 2001: A Space Odyssey, and I'm really not sure what to think about this one...the only thing I'm sure about is that it wasn't the perfect choice of movie to stitch to, but I managed.

I also did some watching alone, mostly Haven (Season 2, E2-13), which I still enjoy a lot - amazon is threatening to take it out of the program again, which leaves me 18 days to watch the last 13 episodes online, I guess I'll manage that. Also, one episode of the Nanny has been watched (S2, E18).

Slowly, planning and prepartions for out move are setting in, we're starting to order some stuff and deciding on other, but it's still rather quiet, which I really enjoy. Next week will see a little more action (and possibly less stitching) again, but I'll tell you about that once it's really upon me, for now I just want to enjoy another quiet weekend :)
Posted by Leonore Winterer at 12:03

The fall fairy kit has always tempted me, it's so beautiful. I've done quite a few dimension kits as that's whats readily available here, and have no complaints.You have got a lot done on that angel, well done.
2001 has never been a favorite of mine, but the music is glorious. I actually prefer the sequel.

Can you do a list of the Disney patterns you already have please? There are a few on sale at Joann's that I could pick up for you. Your Angel is looking so beautiful! Love the fall fairy kit and ALMOST went looking for it until I reminded myself of my pattern buying fast ha ha :D

I hope I won't have any complaints to make either, I've heard a lot of people have run out of floss and it would take terribly long for some replacement to ship here I guess...

I'm really trying to get this angel finished in time, still not sure if I can make it but trying :D

I might have to look for the sequel then, I've heard it clears up quite a few of the questions 2001 raised...

Thank you! That kit will still be around when you got your list down a bit, so no hurry - did you finish that scarf yet?

As for the Disney patterns, I got Lady & Tramp, Lion King, Cinderella, Peter Pan, Pinnochio and (once it hopefully arrives) Beauty & Beast. So I'm only missing Snow White, Sleeping Beauty, The Little Mermaid, Bambi and Fantasia...more than half are already mine, woohoo!

Very nice purchases. Fall and fall colors are my favorites.