I'm actually two days early for this month's WIPocalypse post, but I was about to post my progress anyway and I can't garantee that I'll find the time over the weekend, so I'll just do it no anyways and won't have to worry any more ^_^

The topic to discuss for August is Tell us about your oldest and newest WIPs, which puts me in a very fortunate position - because I double checked, and Angel of Frost which I'm currently focusing on is actually my newest WIP. I started it in May and before you start patting my shoulds for not starting anything new for such a long time, I did start four more or less small projects in between, but all of them have been finished by now so technically they are no WIPs anymore. Now the patting may commence, if you please ^_^

Angel of Frost is a design by Teresa Wentzler featuring a female angel with a bright red cloak and marvelous wings stroling through a winter forest. I've startet it in May as a Christmas present for my grandma (who fell in love with the angel when she first saw her) but put it aside due to sever other projects (mostly presents) I had to finish. Now that I pulled her out again I was a little worried that I may not be able to finish her on time, as it's four pages of cross stitch with lots of confetti-like stitches, blended colors, back stitching, a 1 over 1-section, speciality stitches and beading. As I started focusing, however, I realized that there actually is much of a system to what looks pretty chaotic at first glance, and after I had threaded most of the colors I need for now and made copies of the chart to mark my progress off on, I've been making progress suprisingly fast. Here she is, one week after I started with little more than the border done: 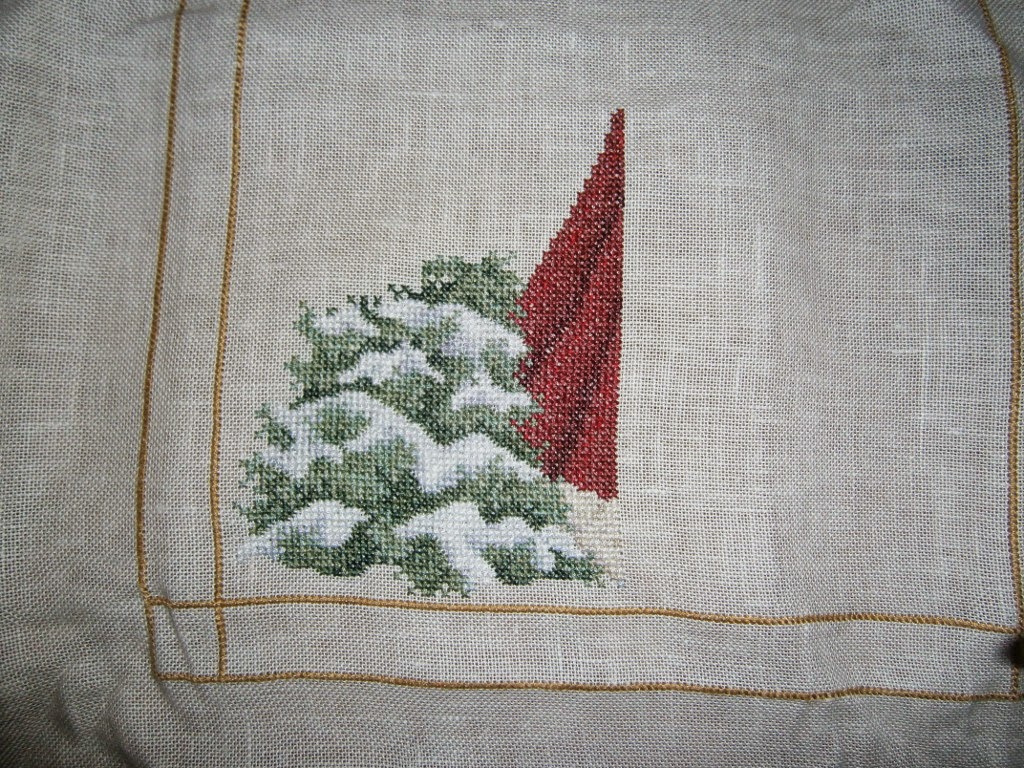 That's more than half a page in one week only, and I have to say I'm rather proud of myself. I know I won't keep this speed up, but now that I know how quick I CAN be, I'm stressing out much lett about finishing in time.

Actually I had planned to concentrate on the tree only, and I guess I would have finished it now, but I just couldn't resist adding some color and starting on the Red coat. Pro is, I'm totally happy about it, because those reds are so very pretty and were so much fun to stitch, con is, I had to order more needles yet again because I threaded all the ones I had already, but that was SO worth it. Also, I needed those anyway because I'll be starting on the wings soon. Either way, I'm totally hyped about this and can't wait to get to stitching some more.

My oldest WIP well, that's another story and I guess technicalle it's more of an UFO, but I'll show you anyway. This is a tablecloth I started maybe 15 years ago - and I am only 25 today. Do the math, and you'll see the problem I'm having here... 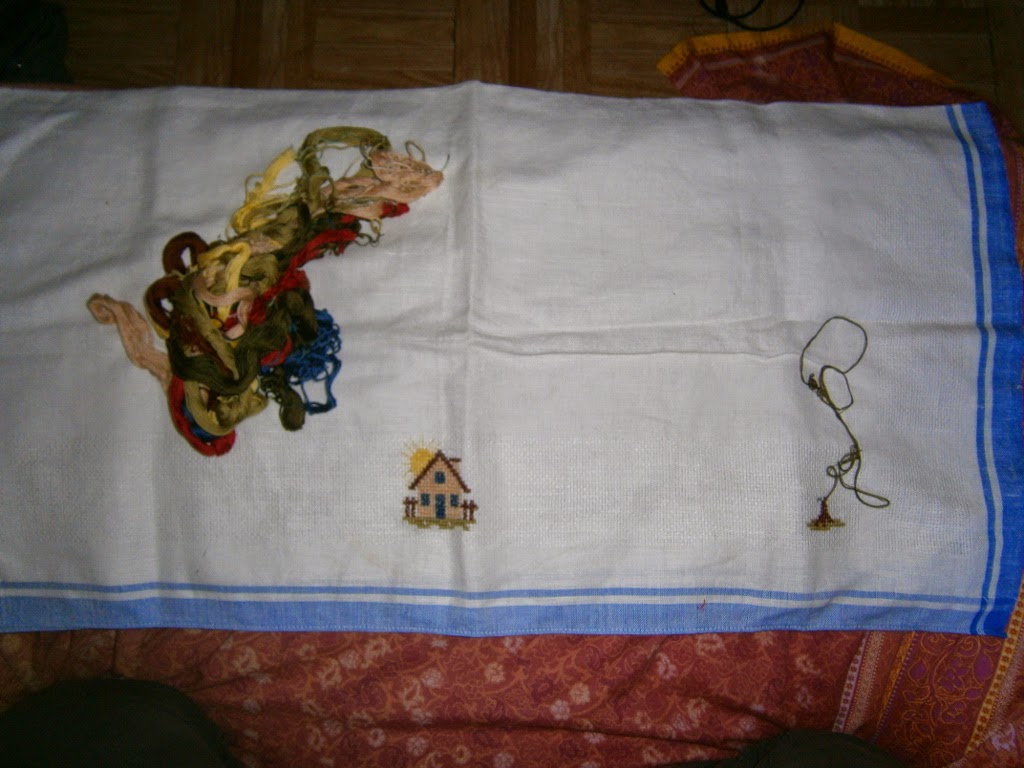 Truth be told, it's not so bad. My stitching was already quite clean at the time, there's not so much done yet anyway, and not so much to do as well; it's basically just one house and two apple trees on eachs of the four sides. But I have lost the pattern somewhere, and while I could recreate the other houses from the one I already have and somehow invent some small tree of my own, I just didn't get around to doing that yet. But maybe I will eventually, this is taking up way to much space in my stash :D

In other news, this week was really productive - not busy as my usual meetings and business trips, but productive meaning I finally had time for things that actually need doing, inclusind progress on my master thesis, flat hunting with Felix (we applied for the most precious litte appartment and are now eagerly awaiting a response), and lots of stitching, of course. I also made some progress with my closet cleaning project, sorting out more stuff that I won't wear or that doesn't fit me anymore. I also watched a few more Episodes of Haven (S1, E13 and S2, E1) and Felix and I continued watching Bones (S8, E6-14). Next week will be more stressful again, but I'm going to get a few more quiet days before chaos starts and I hope that after that, things will return to more-or-less-normal for a little longer.
Posted by Leonore Winterer at 12:09

I really hope you find the pattern or are able to recreate it. do you remember the name of the pattern? Probably something silly like "Tablecloth" ha ha :)

The Angel is beautiful so far and I agree that the red is quite divine (no pun intended) :D

I don't remember the name, but as you say, it wasn't very significant...I tried googeling before and couldn't come up with anything usefull, but I'm sure I'll get it done ~someday~ xD

Angel is growing piece by piece, I can't wait to work on her again as I'm seriously in love with her :D