Well hello again, my dear readers and co-bloggers, and a merry welcome to 2014, which we all know by now belongs (almost) entirely to the wonderful art of the magnificent Teresa Wentzler.

But let's start at the beginning once more - I spent New Year's Eve at my boyfriend's home, which ment a three-and-a-half hours trainride on the afternoon of the 31st which I spent almost entirely reading and finishing the frist Sherlock Holmes 'A Study in Scarlet' on my kindle. And once again I realized that a lot of German translators obviously do something wrong - when I started my grandma's (German) Version of the Complete Sherlock Holmes some time ago, I almost fell asleep a few pages in, while I could hardly put the original version down. Oh well.

We then continued to have a rather quiet evening, watching a movi (Dr. No, the first of the James Bond movies most of which I never got around to watch), than we went up on the hill to enjoy the fireworks and celebrate a little with his parants, than back home to watch the Little Mermaid (they finally released a BlueRay version which has the great original German synchronization from 1989 instead of the not-so-great remake from 1998) and finally start my Peacock Tapestry, which you will see below.

The remaining days until we went home on the 4th of January were rather busy visiting lots of relatives and friends, which was nice, because I got to see a lot of great people again, but also a little sad, because I had hoped for some more movie & stitching time (though we did manage to watch The Nightmare before christmas, which neither of us knew yet, There's something about Mary, which only I didn't know, and Man of Steel, which was my first Superman-movie ever and quite okay, I guess, though I'm more of a Marvel-Fangirl). Since we got home we're watching NCIS again, which makes for a great stitching-background, and we just finished Season 6.

Okay, now finally on to the important part - Peacock Tapestry! I followed Teresa's own advice to start with the border instead of the center of the picture, so I very carefully measured how much spave there would be on each side and where I should begin (so far it's looking good) and than  I started on the left upper corner  block. 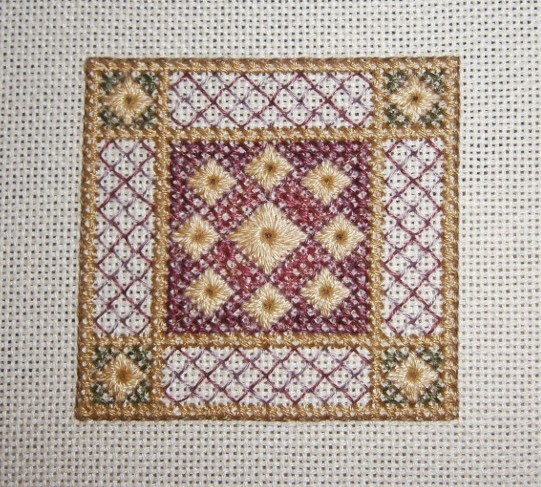 It took me over I day of really motivated stitching to finish, because as you can see, it's pretty detailed - there's also some gold thread on there, but it doesn't show in the photograph. I didn't put on the beads yet as I'm afraid they'll eventually damage the fabric if I attached them already. I do have to admit that I'm making things a little harder for me than they ought to be, because the borders of this diamon eyelets are supposed to be straight stitched, but I didn't like the look of that (to be honest, I just forgot at first, but I tried it out later and still didn't like it) so I went for this teeny-tiny backstitches instead, which I like a lot more.


In the meantime, I also did one section (so, everything that fit on the first page) of the upper border (actually I already started on the second section, but it's not much yet and I didn't want to take it out of the hoop again), and my progress now looks something like this:

I really like how the border is coming along (though it's curious that it seems to be a lot darker than on the picture of the model), but it's also a lot of the same and quite repetitive, so it's a good thing I have some other projects in store so I can take a break now and than - I might even start the Enchanter once the fabric arrives, so I can at least alternate between to different borders ^.~

Concerning the Enchanter, while the fabric hasn't arrived yet, I finally got the missing skeins of floss I ordered back in December. And of course I couldn't just order six skeins of floss alone, so there's also a few more boxes and bobbins to keep my floss oganized and a kit that was on sale for only 5€ instead of the original 20-something (and that I liked. I'm NOT just buying stuff because it's cheap xD). The retailer I usually order from also includes somthing extra with almost every order - usually it's just a catalog or something, but this time I got an old issue of a cross stitch magazine which has some really amazing patterns - a beautiful parrot, and Indian sampler and a chinese vase all in blue and white, for example, so I was quite happy. 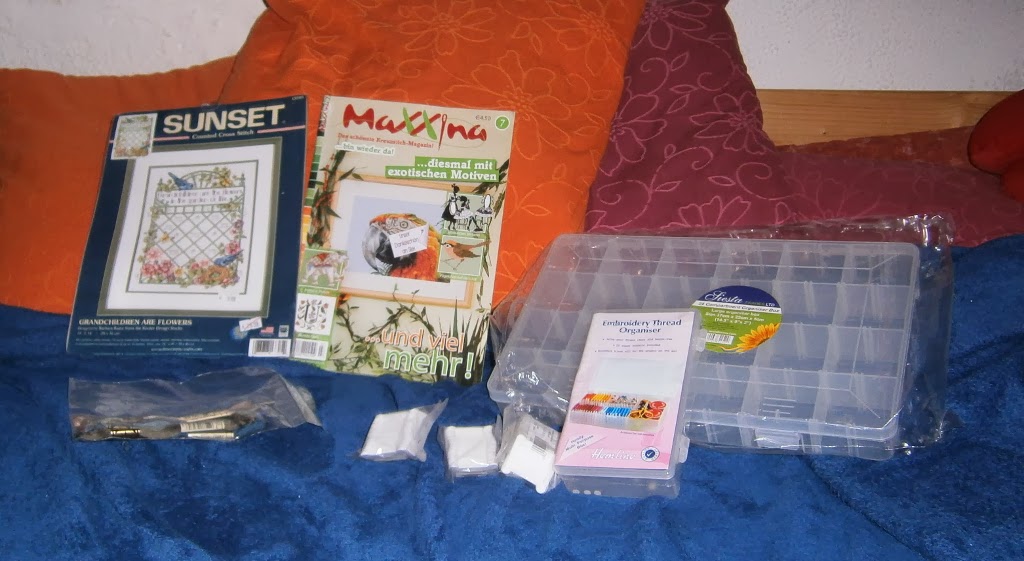 I'll get back to stitching now and hope I can soon update with the second section of the border, but starting tomorrow it's back to university, so we'll see how swiftly that will go...

Posted by Leonore Winterer at 11:53

Wow, you've got a lot done already, it's looking wonderful. Also you have to love free stuff.

So lovely!! I just ordered my fabric for the English Cottage Sampler so maybe I'll be able to start mine sometime soon :D

I agree about not putting the beads on yet, on my current Christmas Challenge I am finding that the beads I put on the snowflakes hinders my hoop placement so I have to be careful, so good choice not putting yours on yet :D I like your teeny tiny backstitch as well. It looks beautiful so far.

Thank you! I'm amazed myself how well this is getting along...though I'm quite sure that the border will be the most easy part of this project, hehe.

Thanks! I sure hope you'll be able to join us soon - my order from sewandso arrived a few days ago, it only took about one week instead of the 2-4 weeks the announced, so maybe you'll be lucky too!

Yeah, that were my thoughts too. And as I'm doing the backstitching as I move along, it won't be tooo much finishing stuff in the end anyway, so waiting with the beads sound reasonable to me...