As I already mentioned, last weekend was the very first IHSW (International Hermit and Stitch Weekend) I wanted to participate in, and as I also mentioned, I wasn't even home over the weekend, which made things quite a bit more complicated. You have to know that Felix' family - while all of them are very nice people - is also pretty demanding in terms of time, so hermiting was quite...difficult. Some stitching was done, however - as promised, I started on the 'Toby the Fox' bookmark from DMCs Woodland Folk series, and I got quite a bit done already. 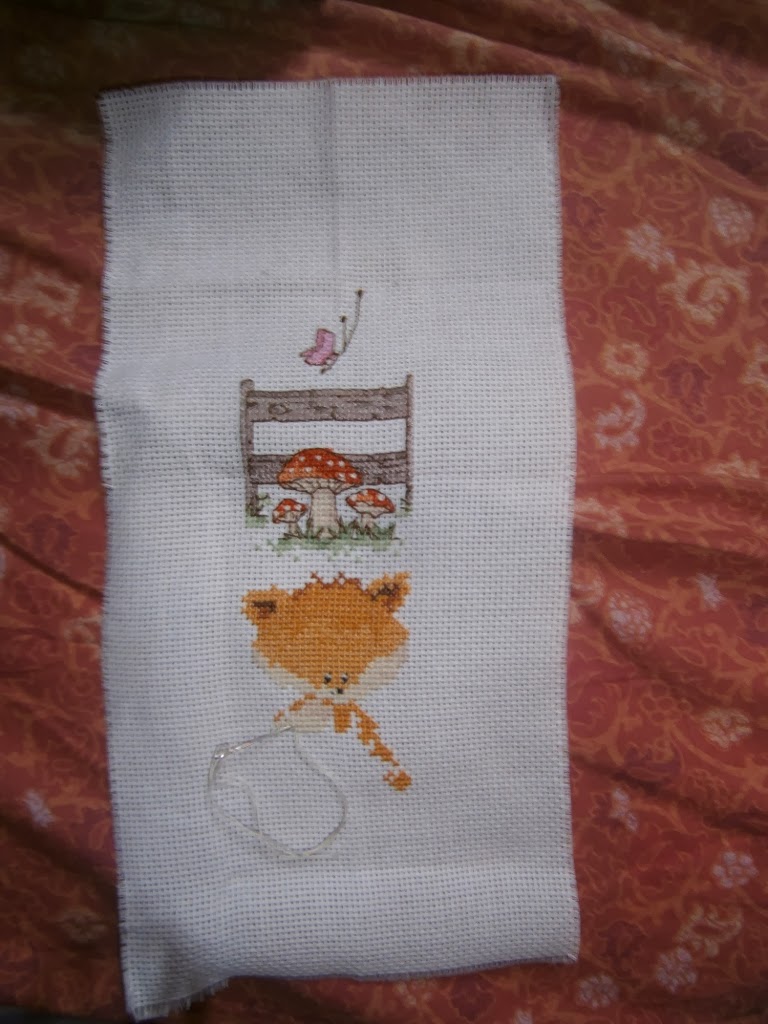 I might even have finished it - I already got the top part done, but than I realized that I was off by one stitch horizontally, so I had to pull everything out again, which not only cost me quite some time but also had a great negative impact on my motivation. But now I'm right back on track (the picture shows where I was sunday evening, by now there is some more fox in the picture) and I guess I'll have it finished in a few days, than I'll get back to Peacock Tapestry.

As I already mentioned, the weekend was really busy and crazy, though I enjoyed spending time with with Felix' sister Evelyn and his brother Max and, of course, my dear friends Jule and Frank. But I'm still a little bummed that I couldn't join the IHSW hangout with Carla and Nancy and Krystal and everyone else. I had plans for this weekend, plans, I tell you! Sadly, life usually has other plans whenever I try to make some of my own, but I guess that's just like it has to be.

On a bright note, we finally got around to watch Pacific Rim which we wanted to do ever since we saw the Honest Trailer. To be fair (the following is not meant to contain any spoilers, but if you are very sensitive to stuff like that you might want to skip the rest of the post), the movie is not half bad, though I DO smell a lot of wasted potential here (like - what exactly IS on the other side of the Breach? And why are the governments so adamant about shuting the Jaeger programm down?). But as far as giant robot movies go (okay, I only watched Transformers so far, and those are minuscule compared to the Jaegers) it was pretty good. Made me almost forget my stitching while watching - almost! And that's where I'll be heading now. Back to stitching. See you guys around!
Posted by Leonore Winterer at 19:20

Well, even though you weren't with us, we KNEW you would be stitching and that is what IHSW is all about :D I love that little bookmark...so ADORABLE!!

Life does tend to get in the way, but I am glad you were able to sneak in some stitches!

How annoying it is to be out by one! Glad you're back on track now.

Pull the other thread said...

Great progress! I hate it when life intrudes on my stitching plans. Love Honest Trailers, they are so funny.

Pacific Rim was fun, and had plenty of room for bad sequels, I'm always happy with a halfway decent disaster movie, We missed you at the hangout, but happy you got some stitching in.

Glad you got to do some fun with freinds, and your stitching is lovely!

Aww, so sorry to read you had to frog. That really majorly sucks! Glad you got some stitching in despite the very busy weekend. :D

I know, right? These woodlang folk-designs are all insanly cute, but they do have an aweful lot of backstitching...

Sneaking around life's obstacles is my speciality ^.~

Yeah, and it was the edge of the design too...can't tolerate that now, can we?

Yep, what exactly does life think it is, right? Intruding on our stitching plans like that...

You're right...movies like that don't have to be goo, as long as they're entertaining :)

It does indeed, but I almost got it back in already ^_^ Anyway, I'm really hoping for some quieter weekends now...