Getting into the flow

Since university has started again, everything I do seems to be painfully slow. Might be that I'm just attempting to do to many things at once - Little time plus reading multiple books, coding on multiple projects and playing multiple games makes for very little progress in each of them. Thankfully, stitching proves to be an excaption, because here I managed to focus solely on one project - Peacock Tapestry! I'm making great progress with the border and as such I was able to finish the next section. Now only a little more before I reach the upper right corner - if I can keep this pace, I'll only need about three months. For the border. Oh well.

I did encounter another problem this week: For some reason, my kit contains two different shades of golden metallic thread. From comparing whyt I got with pictures on the internet, I gathered that I probably have some 002C (maybe even 002, the structure seems to be quite different, too) in addition to the 102C I actually need - and of course I started using the wrong kind. So I ripped all the gold I had used so far out again, only to be faced with another problem - the 102C alone obiously wont't be enough for everything I need, and the only shop I know that stocks the Kreinik Cord-Palette is the UK-based sewandso that also had the fabric for my enchanter, and I don't want to order there for just one single roll of floss. So for now, I'll only do the cross stitch-parts of the gold thread (I should have enough for those) and once  get around to ordering the floss, I'll do the backstitching as well - this way it won't matter as much should I get s slightly different shade than.

On a brighter note, their shipping times seem to be a lot shorter than they announce - because after only about a week, the fabric I ordered has already arrived, together with the Romeo & Juliet-Leaflet I spotted in their stock. Can't order just one item, you know the drill. So now only some threading bobbins and cleaning the edge of this shiny new 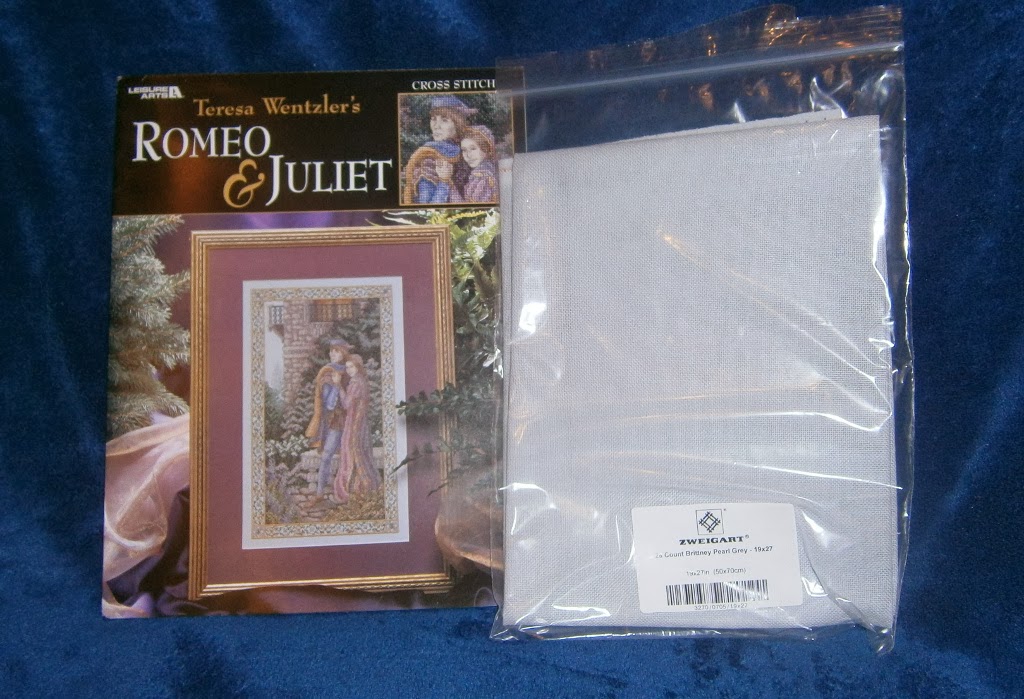 fabric, and the Enchanter is good to go, too. Which means should I ever get into a situation where I can't continue working on PT (which might well arise as I have read that lots of this kits are missing certain colours after all or, if not, have unsufficient supplies of some, so I might need to reorder even more stuff at some point) or am just plain bored with it, I won't need to pause with the Year of TW after all. Also, this order kind of marks the official start of Stitch from Stash for me, as I haven't ordered anything else back in 2013, so everything I need and buy from now on will count. Phew.

So, I'll be off to stitch the next section now, which is quite a bit smaller than the last one, but as I'm not home the next weekend, I might only update after that. Oh wait, I think I need to post something on the 16th für the WIPocalypse, so I guess I'll update again before the weekend after all...
Posted by Leonore Winterer at 16:14

So if your order from sewandso came in so quickly maybe mine will as well? HURRAH!! Dies ist eine wunderbare Nachricht!

Next weekend I will do a blog update on how my TW Stitchers are doing and if you have been to my blog recently your blog, Nancy's and Krystal's are all listed all the time so everyone can click on link to visit your stuff :D

You've got so much done, it's wonderful. I admire your use of metallics, they drive me nuts, luckily there are none in Cinderella, just beads which I like using.

Yeah, I noticed, thanks a bunch for doing that - fishing for new readers is always welcome :D

I didn't use beads or metallics before, and while I haven't put on any beads yet, my introduction to metallics went smoother than I thought - also this pattern uses very little of them, for which I am still grateful, hehe