As already mentioned in an earlier post, I'm following the WIPocalypse this year, and the rules suggest to update on each full moon, which is neat as it won't collide with any other project this way. There's also suggested topics for each update, and while I won't promise that I will answer all of the questions, I'll try. So here comes WIPocalpyse update #1 - Introduce yourself, your projects, and any goals you have for the year!

So for a detailed introduction of myself I kindly point you to my very first blog post on December 28th - this whole blog is still quite new, and I would basically just be repeating myself if I wrote another one. I will, however, gladly introducy my ongoing and planned projects to you - so let's start with what surely is my most imortant project right now - Teresa Wentzler's Peacock Tapestry.

I started this on January 1st to participate in the '2014 - The Year of the Magnificent Teresa Wentzler'-project. First, it was really just a replacement - my first project was supposed to be The Enchanter, and I just got PT because I found the kit for little money on ebay, but because of several...supply-hiccups I couldn't start the Enchanter when I wanted to, and now I'm totally in love with Peacock Tapestry, though it will probalbly take most of the year to finish. 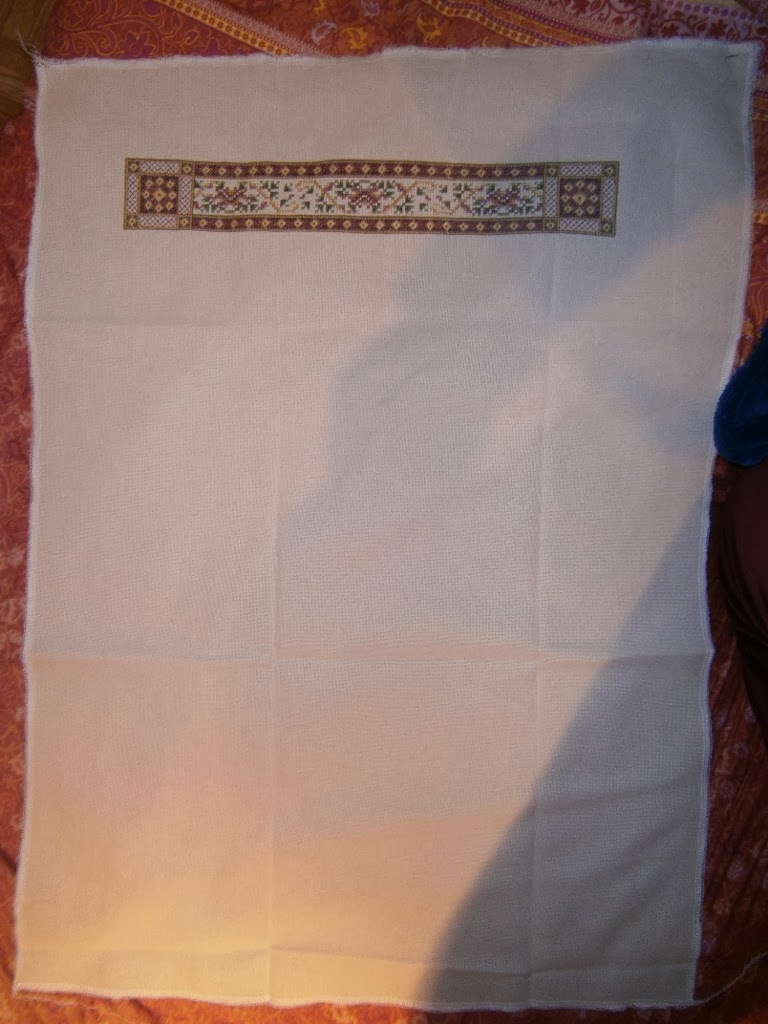 So here's where I am right now - while taking the picture, I realized that my work wasn't, in fact, as centered as I had aimed for, but I still got almost 3" on every side and the fabric won't fray, so it's nothing to start ripping good work out about. I think.

So far, I have done the top section of the border, and I'm aiming to finish all of the boder/frame before moving on to the actual picture, which might get quite repetitive, so it's a good thing I have other projects to alternate with.

Most prominent amongst these other projects is the mid-sized The Little Mermaid from the Thomas Kinkade Disney Dreams Collection, one of the few WIPs that carried over from a very productive year 2013. When I saw Thomas Kinkade's Disney-cross stitch, I fell in love instantly, and I wanted to start with one of the mid sized ones because the small ones are, you know, small, and the big one quite intimidating, though I really want to try one or two of them some time. Anyway, I worked on this quite intensively for some time, but there is a lot of color chaning involved (sometimes after only one or two stitches), so it's quite tiresome and I somehow lost my 'drift' on it, if that makes any sense. 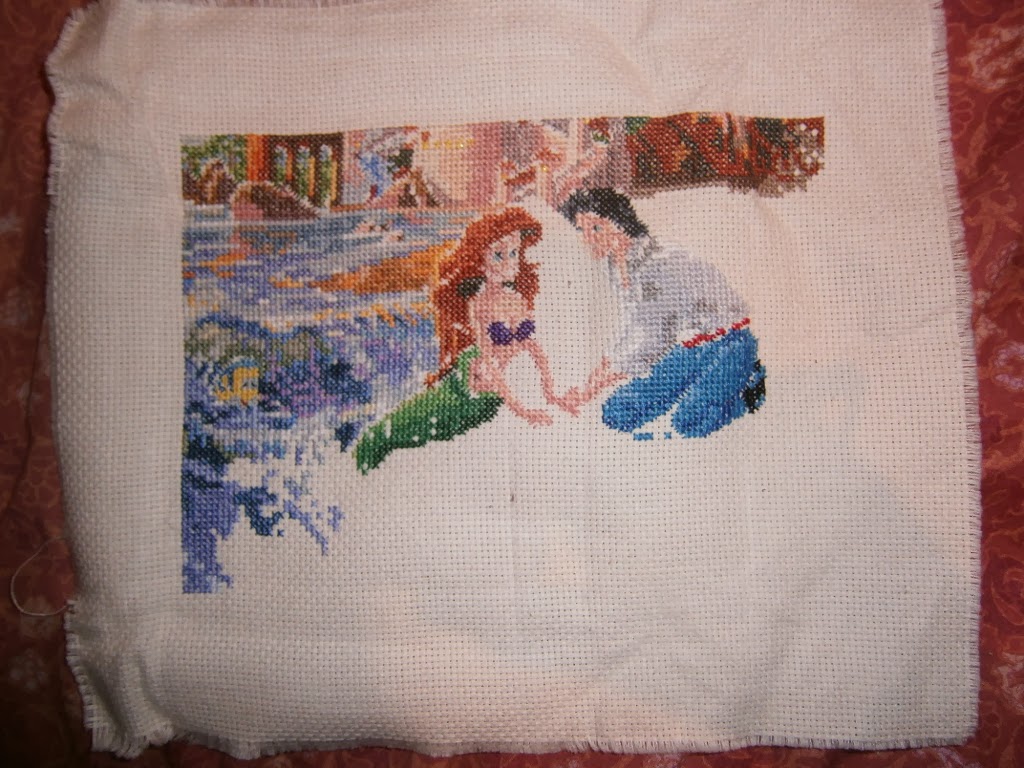 Right now it's only a few stitches here and there - when I don't want to move PT, or when I finished a section and can't find my camera and don't want to move on before taking a picture - so it's going rather slowly. The last time I actually worked on it was when I was at my grandfather's in december, caught on the couch with nothing else to do, and I made quite some progress then, so I guess all I need is to find some motivation and this will be done in no time. 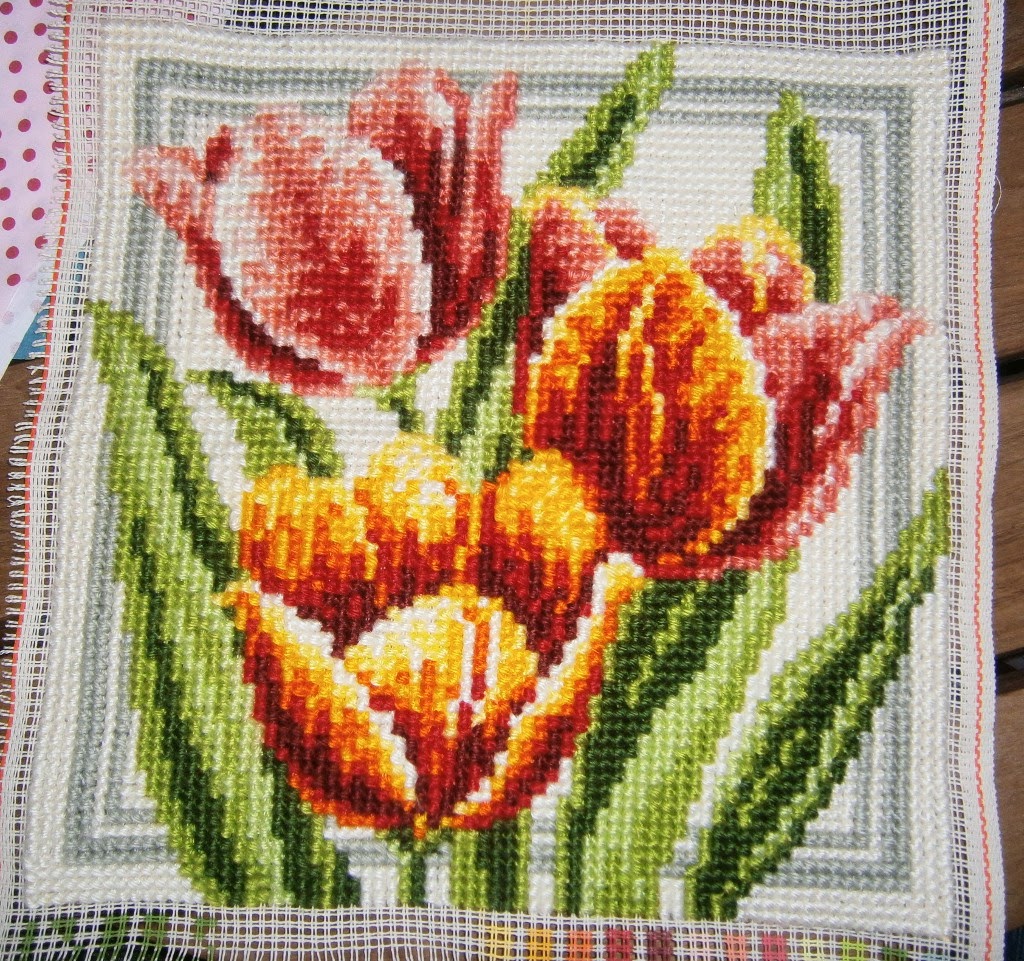 Well, and I guess technically, this tulip pillow case by Vervaco is still a WIP, too, even though all that's left to do is the finishing - so I need to pull myself together and put tha backside on. Piece of cake, I hope. Working with such thick and fluffy yarn surely was an experience - one I'm not sure I want to repeat. Seriously, I'm not sure - somehow I liked it, and somehow I didn't; it's quite confusing.

So, that much for my ongoing WIPs. I do have some ready-to-go projects lying around here (either complete kits or just projects I gathered all the supplies on) that might become WIPs during the course of the year, including (but probably not limited to as I'm always forgetting about stuff):
Since I'm also participating in Stitch from Stash and therefore don't want to spend spend a lot of money, this will probably be about what you can expect here during the course of the year (I do have some other UFOs hidden somewhere, but those are mostly from my cross stitch beginning times 10-15 years ago, so there will have to be some serious considering which of some actually will be finished), though I do plan on doing some seasonal stitching along the way, so we'll see. Also, I by no means intend to finish all of this projects this year (I would sure like to, but I don't think there's any chance for that happening, not with two projects as big as PT and the Enchanter), but I'll sure do my best.

So, that much about my stitching plans for the year...time to move on to the more imidiate future. Since I won't be home for the weekend (tonight, my boyfriend - his name is Felix by the way, I feel a little stupid writing 'my boyfriend' all the time - and I will drive to where his parents live, because it was his brother's birthday and there are also some other apointments he needs to attend) I sadly won't be able to participate in my very wirst IHSW (International Hermit & Stitch Weekend) in the way I want, but I'll still try to get some stitching in. I don't want to move PT, though - it's currently all nice and cosyly settled in it's little basket and I'm afraid it will get all tangled up if I put it into a bag or something - and I don't feel like doing much work on the little mermaid, either (though I'll take her with me, just in case), so I prepared the Toby Fox bookmark, which will make for a nice break from all this PT-border-thing.

Once I get home, I can than decide whether I do some more border stitching, or work on the Little Mermaid, or even start the Enchater so I have to big projects to alternate between. Or maybe, just maybe, I already started the next part of the border because for some reason, I can't keep my hands off of this not-quite-a-bird-yet. Oh well.
Posted by Leonore Winterer at 09:14

Nice finish on the top part of that border!! It's so beautiful :D Have fun this weekend with your BF, we will talk about you since you won't be with us ha ha!

You've got so much done on the Peacock already!! and it's so pretty. The nice thing about dedicating a year to Teresa Wentzler is you really only need one big project and the year is covered. Of course the downside is that those big projects aren't terribly movable.
I've avoiding going after the Thomas Kinkade disney one's because I know I'll get sucked in and buy bunches of them. Hopefully Stitch From Stash will curb that impulse.

Thanks and thanks! Haha, I hope you'll only say good things as I won't be there to defend myself otherwise ^.~

Thank you very much ^_^ Yeah, it's quite a bit, but sooo much more to go...you're right, but on the other hand, I found much more than one big project I'd like to do, so one year isn't nearly enough.

The Kinkade-patterns are really pretty...I'd like to do one of the big ones someday, though probably that will take a whole year too. But it's disney! I slowly feel how SFS is starting to hurt, so many pretty patterns everywhere...

Unfortunately I went looking at Kinkade patterns, I really really want the big Sleeping Beauty and Lion King ones, luckily they are beyond the budget, so I'm not allowed to be tempted this year.

Cute Little Mermaid! And I LOVE TW, I admire anyone who can stitch them!

Hi, I also have the chart for TW's Peacock Tapestry and keep looking at it longingly. Unfortunately I have 2 WIPs and 2 as yet unstarted pieces with deadlines to hit this year. I shall enjoy watching you stitching yours instead.

Yeah, I'm drooling after these one too...not intending to further tempt you, but one can always split the expense over more than one month...but for now, I'm trying to hold on >.<

Thank you :) Same goes for me - we will see if I actually CAN pull off this thing, so far it's looking good, but still so much to go...

You are very welcome to follow my progress on this piece ^_^ If I might ask, what are you working on this year?