I got a fair bit of crafting done in July, with a pretty fair distribution across my different crafts (stitching still got the lion's share, of course). There even if some sewing in there - I had to make a new tag for that, as it's been so long since I did any! 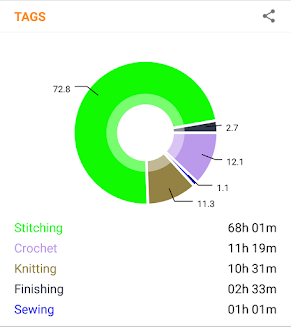 Project-wise, I was pretty spread out, but mostly because I got a lot of finishes: 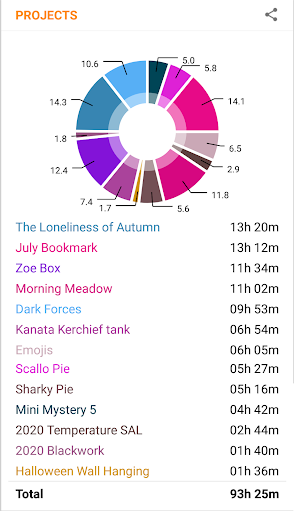 I was a little worried that I only managed two rotations (one on Zoe and one on Dark Forces) this month instead of my usual three or four, but I totally forgot about Morning Meadow, which took up another eleven hours! I also stitched up another one of the Mini Mysteries, plus a cute back that Magical graciously provided: 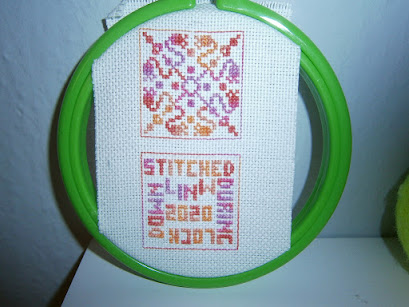 On the knitting side, there were the two small scarves I showed for July's Gifted Gorgeousness, and in terms of crochet, I pulled out the Kanata Kerchief Tank, which is almost done - I'm in the process of sewing it all up, so hopefully there will be something to show soon. I also pulled out a small set of crochet emojis that my brother in law gave me a couple of years ago, and finished them. 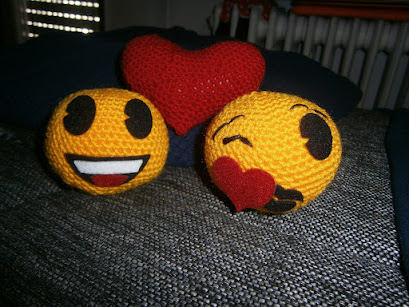 They were fun but I don't really know what to do with them now! For the moment I added some strings and loops so they are hanging on Felix' drumset.
Since I am having this week off, I made a great crafting start to August, I'm almost done with my second rotation of the month - let's see how much time I can add to that clock!
Eingestellt von Leonore Winterer um 23:46

Knitted emojis? Whatever next? You might not really know what to do with them but they are darn cute!
Congratulations on another very productive month. in a way it was nice to see your crafting evened out between so many projects, but I know what you mean about wanting to focus on the bigger projects more. :)

I like these pie charts, that's cool to keep track of the different crafting! I may have to do something like that. Hmmmm, ideas...

It looks like you had a very busy month and the emojis are fun!

Nice pies, you did seem to get a lot done this month.
The emoji are cute, you could put them on elastic and use them as cat toys!