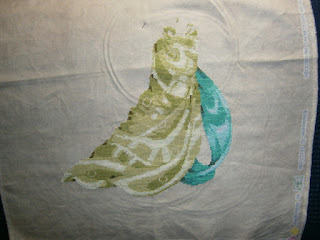 I started off with a little frogging, which was seriously stupid: there are exactly two blends used in this pattern, one in the greens and one I haven't used yet. The green one only has a couple of stitches, less than a hundred altogether, so I blended it in the very beginning and kept using that same strand ever since. Now I ran out and went to make a new one, only to realize that I used a wrong colour the first time around! It did look a little strange, but who was I to question the pattern...
Well, now that I had seen it, I could not un-see it, so I went over the whole dress and unpicked and restitched, which took about an hour. Much better now!

After that, I started on the left-side floaty thing. It mostly used just three colours, so stitched up pretty fast! I actually made another mistake in this one, but since it only makes the shawl a little longer than it's supposed to be (and I don't think it shows), I decided I had done enough unpicking for now and just went with it. 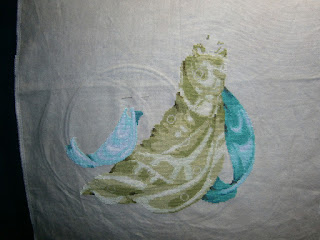 In the next rotation, I should be able to connect the floaty shawl bit to her body and then maybe finally stitch up to her incredibly slender waist. But for now, it's time for the February Bookmark and Temperature SAL!

Posted by Leonore Winterer at 10:10

So pretty! And, seriously--does anyone really have waists that small :)

She does look lovely with her floaty scarves.
It is best to frog the incorrect colours as they will always look wrong to you, even if we can't see them!

Sorry that you were visited by the frogs, but at least it wasn't too bad in the end. The longer floatie thingie on the left just means she'll be unique to you, and who's really going to notice a couple of additional rows? :)

She's coming along beautifully, even though you had to frog some of her dress!