I promised you this post a while ago, and I really only need to copy all the details from my deviantArt and add a couple explanations and pictures, so here we go!

A while back, I read about a pretty cool challenge on dA - basically, you chose a medium you wanted to work with, gave a couple constraints (like 'no nudity' or whatever), and then they gave you a prompt and you had one month to make something with it. Of course I chose needlework, and my friend Ashley, who's actually a community volunteer on dA, gave me the following challenge:

I challenge her not so much on theme as I do in execution: a 5x5 square on 14 or 18 count, it could be a mandala or other symmetrical pattern, but she must use strictly metallic threads to see it done. These could be DMC metallics, Kreinik in various weights, or any other thread manufacturer. It does not have to be a 'full coverage' pattern for the size but it should keep in the spirit of the challenge!
Here's what I made, together with the decription I wrote: 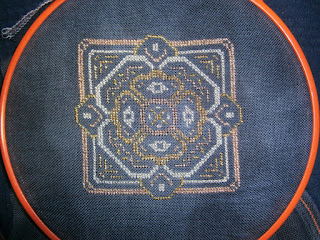 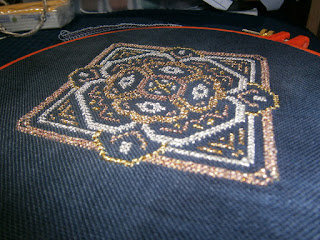 As Ashley has obviously noted going through my gallery, I tend to shy away from using too much metallics in my work, so I decided to use this challenge to take the bull by the horns and experiment with a couple of different metallics. I dug into my stash and asked on a copule groups on facebook which brands people recommended. These are the five threads I ended up using (starting from the middle outwards, I stitched the 'frame' structure first and filled in all the little bits in the end):

Petite Treasure Braid (Copper/PB39): This one came highly recommended, and it really is a joy to work with! It comes as a one strand floss on a card of 25 yards and is a little on the expensive side, but so worth it. It's super pretty and has just enough coverage for 14ct stitching (but is probably better for for 16 or 18ct).
Ease of use: 5
Sparkliness: 4

Madeira Metallics No. 10 (Gold/325): A pretty traditional metallic I've had in my stash for a few years but never got around to using it. It comes in a twist of two strands I'm not entirely sure are supposed to be seperated, but I did so anyways as one of the strand had perfect coverage (I wouldn't recommend it for smaller counts, though). It was pretty nice to work with, but hard to thread a needle because the splitting of the strands made the floss super fray-y. It's EXTREMELY sparkly, nothing subtle about this one! It comes in a package (it's a little weird, not really a skein) of 20m and is one of the cheaper options for metallics.
Ease of use: 3.5
Sparkliness: 5++

DMC Light Effects (Silver/E168): I had actually used this before, but only on a little backstitching. For that it was nice; it's a lot less cooperative for cross stitching! It comes in six dividable strands, in skeins of 8m, just like the usual DMC, and just like that, I had to use two strands to get a decent coverage. It wasn't that hard to work with, but sometimes a little tricky to make it lay nice on the fabric. It's not super sparkly, but has a nice sheen to it that I really like. It's also on the cheaper side, and the six-stranded-ness gives it a lot of versatility.
Ease of use: 3
Sparkliness: 3

DMC Diamant (Gold/D3852): A newer thread by DMC. It comes as a undividable, one strand floss on a spool of 35m. It's a really nice gold colour and I bet it's super nice to use for detail work or even cross stitch on lower counts, but one strand is just not enough coverage on 14ct, and two strands are a little too bulky - my stitches with this floss are by far the least-neat looking ones I've made in years! It's a little pricier as well.
Ease of use: 2 (in this scenario)
Sparkliness: 4

Kreinik #4 Very Fine Braid (Copper/3270): The classic of the metallics, at least for me! I've used my fair share of this one (although not as much as my friend Magical, she's the master of Kreinik!). It's pretty nice to work with, and the #4 had a nice coverage on 14ct (there's all kinds of strengths for different uses). It's not quite as metall-y as the others I've tried, there is a fair bit of some kind of nylon (I guess?) base in the thread, but it's still a pretty decent sparkle and comes in a huge range of colours. There's only 11m on a sppl, though, so if you need a lot of it, it can get quite pricy.
Ease of use: 4
Sparkliness: 3.5

So there we go...they are all pretty nice to work with, but I think my favourites are the Petite Treasure Braid and (surprisingly) the Madeira Metallic No 10.

Now to the specs of the design itself:
Fabric - Nevermore linen by JodyriDesign (I thought it was 16ct, so I was a little worried there, but turns out it's a 14ct after all so all is well!), a leftover from my Turtles all the way down
Design: 'Geostar' by KLT Charting - if you now the design, you'll probably notice it's not complete. There will be a final round of 'spikes', bringing it to almost 8" spare instead of the 4.4" it is now (I'm calling this 'close enough' for the challenge requirements). I didn't have time to do the whole thing and it'd be too big anyways, but I will use my favourite two colours (the PTB and MM) to finish it of soon.

Total time (so far): 11h 24min
Of course I'll continue working on this now that the challenge is over (the results are still out, but there were so many awesome submissions I don't think I'll win - which is totally fine as I had a ton of fun!) and show you the result in the end.
Posted by Leonore Winterer at 22:26

Leonore: What a fun challenge.
The fabric choice is beautiful, the metallic's are beautiful.

Very interesting! I have to admit I steer clear of metallic thread whenever possible; the results may be amazing but I find them so frustrating to use. However, your review means that I might try PTB if metallics are called for. Thank you!
Your Geostar looks fantastic. Don't forget to show it again once you have added the 'spikes'. Maybe it'll be ready for Christmas? :)

Oh such a fun challenge; I tend to shy away from metallics too as they can be a nightmare to work with. Your ratings will be very useful. Beautiful piece x

What a neat idea to try out all the different brands of metallics!
At first I thought you meant this was your own design as well as your choice of colours, it looks gorgeous!