Hey lovelies, I've had a pretty exhausting week and I'm already falling way behind again, so I'll try to get a few catching-up entries up this weekend. To start off, here's an easy one (for me), the Summer Postcard Blog Hop, hosted by no other than the mistress of blog hops herself, the one and only Jo of Serendipitous Stitching!
The theme was 'International' and we were supposed to send her a picture of some stitching along with a message. The following was sent by Clare-Aimetu: 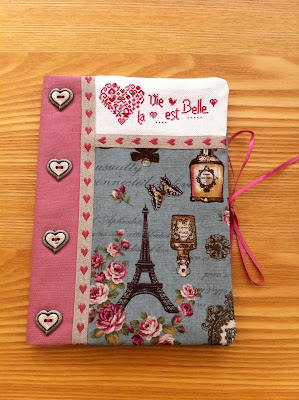 Bonjour toute les monde – I’m currently at home resting after another superb holiday with my travelling owners. We’ve been to many places since my first trip which was to Paris for their 25th Anniversary. Our latest holiday was their first cruise, round the Eastern Mediterranean celebrating their 30th Anniversary, how times flies. It’s great fun seeing the world doing my important job looking after their passports – Bon Voyage !
Eingestellt von Leonore Winterer um 18:38

Oh my you have my postcard - this was the first quilting item I made, it's a great document holder which we use at home and away..... thank you for sharing my postcard x

Thanks for taking part in the Summer Postcard hop. I loved Clare's document holder. If I ever went anywhere I would definitely want one LOL

Oh that is a beautiful postcard x

A great card from Clare. I remember her making that!

A lovely postcard, the stitching and quilting make a beautiful holder.

I agree. It's nice to keep some things analog and on paper even today!