Yeah, I know, it's not like me to post in time, but stranger things have happened! I was working on TLoA all of last week, and thought why not just get all my progress in until the end of the month so I can work on something else. Hah, we'll see how that works!

First, though, there's the question of the month - When do you begin planning your stitching goals for the next year? Well, there are two answers to this question - first one being, I'm constantly making plans for the next couple years, things I could stitch, want to stitch, how to divide things up in a way that would be manageable...if I had 40 hours of stitching time every day! Sitting down and planning what I actually WILL try to work on in the year is usually what I frantically try and do in the last week of December...and then things start changing barely a week later. I'm way better at making plans than following through!

So, now to a plan I have been following for almost three years, and that it The Loneliness of Autumn, which I've been stitching one length a day, or rather at 28-31 lengths a month, one colour at a time! This month, I went through 1294 stitches of 833, a brassy green-ish yellow (yes, that doesn't sound terrible exciting) and made a start on 3345, which is a very pretty green for a change! 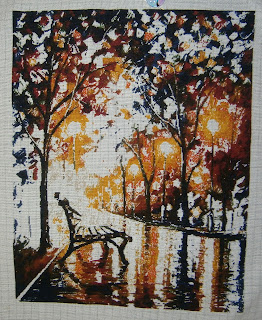 Posted by Leonore Winterer at 21:07

I love seeing this emerge!

Hi Leonore: You are getting close to the finish line on Autumn, I plan all year I only plan a few projects at a time, then when they are done, I plan on a few more.

Have a great week
Catherine

Your Autumn piece is looking lovely, Jutta. It always amazes me at how some people can keep track of the number of stitches they've done! Yours are very impressive and I do like the idea of stitching with one length of thread each day on a large project like this. Hope your December is off to a wonderful start ♥

Autumn is so beautiful. I wonder when we will get some of those lovely blues appear?
LIke you, I enjoy planning throughout the entire year! It helps me drift off to sleep thinking of all my projects!

It is looking brighter! It must feel good to be over half way finished?