Now we're getting somewhere...and I'm ready to show you my latest SAL progress! First, as usual, there is the Temperature Tree, the October edition. As you can see the months was still uncharacteristically warm for the season - good for heating costs, bad for the symmetry of my tree! November has been pretty cold so far, as if to make up for it, so I'm pretty sure there will be some blues showing up soon. 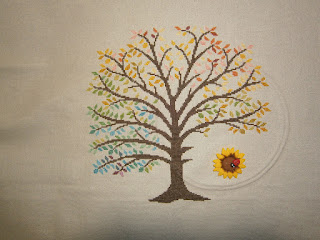 Now for the next SAL, I'm...a little confused. I know I stitched one part every month, and I knew I was supposed to finish this in November, but...that was supposed to be the 'November SALs' post, not the October one! Going back I realized that I skipped posting about part 10 (Sleeping Beauty) and posted part 11 last month. Oops. So this post *could* have been up two weeks earlier! Well. What's done is done, and I'm not going to hold off on posting it now...here is the Magical Kingdom SAL in all it's finished glory! 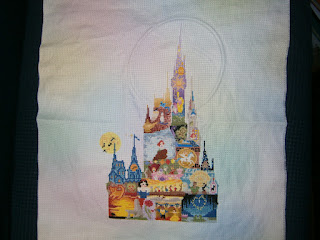 Part 12 was Rapunzel's tower, and that sun almost broke me, with literally hundreds of fractional stitches and fractional back stitching, but I think it was very worth it in the end! I hope to have this one frames soon as well.

So as this SAL is done one month earlier than expected, we'll probably only see the Tree in December...although I do have plans to add something else to the mix, but I might just be mean and not tell you before January ;)

Posted by Leonore Winterer at 20:42

Congratulations on your Magic Kingdom finish, Leonore! It is such fun to look at and remember all the old Disney characters and stories. I look forward to seeing it framed :)

Fabulous work on both SALs, the tree is so beautiful. The Peter Pan block is still my favourite from the Stories SAL.

Hi Leonore: Your temperature tree is beautiful, as for the other design, nice work on both designs.

Your tree looks great, even with the warmer weather!
What a sweet Disney finish, I hope you frame it asap.