Apologies to Jo for shamelessly abusing her kindness of keeping this link-up open for me until the end of the month - I did better for a while, but she and I both know that never lasts! I do have a lot of gifts going on though, and getting closer to Christmas, they are only multiplying. So without further ado, let's get started!

The first gift you've already seen as I'm going a little anti-chronological her, but it's a double match so I had to post it again - it's the little Christmas Owl I posted in my FFG post. Last year, I made Christmas ornaments for my husband's mother, sister, and grandma, and they were a huge hit, so I'm doing it again this year - only this year, I was determined to start early, so that's why the first one is already done and dusted! It's a little freebie pattern by Holly's Hobbies that I had probably saved for a few years, and now was it's time to shine! Not sure if I will give this to my MiL or SiL yet, depends on what else I find. 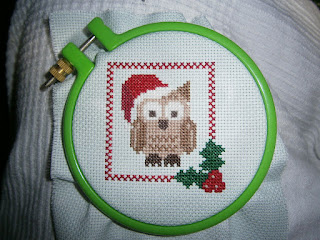 It's not easy to make out in the pictures as it's really subtle, but that fabric is not white - it's one of the Fabric Flair samples Rachel sent me when I won her blogaversary competition earlier this year. If I am not mistaken, it's called Shades of Winter and it's a really nice green, just a light touch of colour. Perfect for Christmas stitching! I really enjoyed the type of fabric too.

Next up we have Ubuntu, my big birthday gift blanket this year that I am working on every month. I'm still making my way through the half diamonds - last month I had one finished and another one half done, now we have three completed and one almost done. So hopefully next month I'll be done with these, I've started to memorize the pattern and looking forward to getting to the next fun part of this blanket! 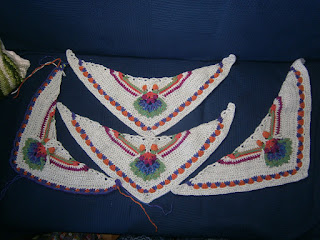 There were two more new starts that are still on the go. One was early this month, another baby gift, another fox, but this time it's one of the ragdolls I've been making a lot of lately. Since I had a lot of other stuff come up then, I only finished the head, one ear, and a bit of the body so far: 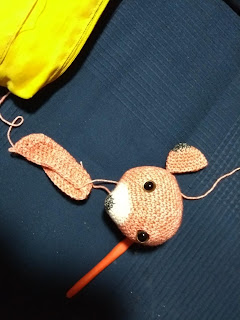 And then just this week, I started a Christmas present for my grandma - I wanted to make her a shawl that is soft enough to snuggle in, and after some deliberation I had the perfect yarn in my stash - it's called Aurora Borealis, and the colours really show - and a suitable pattern too (it's called Bruinen and is a free design by Morben Designs)! I just made a little start so far, but with plenty of time until Christmas, a little here and there should see this done well in time. 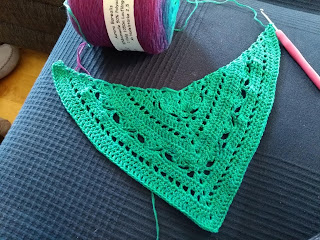 So that's it for this month - of course I've also been working more on Fans of the Far East, but I think you see that one often enough already! I also started a wedding sampler, but that is semi-secret for now, and I'll show you at a later date. Until the next checkin, I plan to continue working on Ubuntu, Bruinen, and the wedding sampler, and also start another ornament or two. Lots going on here, as you can see!

Lots of pretty gifts this month! Your grandma will love the shawl.

Your owl is lovely, ragdoll looks cute even as a head with one ear. I love the colour of your shawl.

Thanks for taking part in GG this month. Regardless of the date!
The owl is very cute and that shawl is going to be beautiful too.