A couple days ago, I finally finished finishing (hah, there's a sentence that only makes sense in the crafting world!), and I realized I never made a post when I finished the stitching back in...I wanna say late October? because I anticipated doing this post soon afterwards. Hah! So that didn't happen, but get ready for a picture heavy post now instead!

So last time I had just finished the top of the lid, and I went on to stitching the bottom of the box. As most of it won't be visible (with the box standing on it and everything), there was very little stitching going on, so this part was done soon: 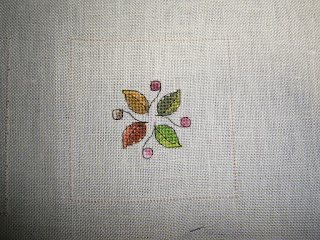 The last two parts were the front and back of the little biscornu that goes on the lid as a handle. There was a lot of pretty stitching going on in those two little squares - including a repeat of the pretty specialty stitches seen on the box and lid - but they still didn't take long to stitch. 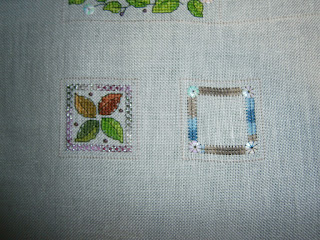 That was all the seperate parts of Zow box done and I was left with the taxing task of assembling it all! Here are all the parts together before I cut them up (which was a little scary, so it took a couple of days to get the courage to do it). As you can see, there were lots of little pieces left over for ornaments and other smalls. I finally managed to cut everything up, wash and iron the single pieces, and prepare have Felix cut to size the interfacing. He did a great job so I could folg the pieces in between the inside and outside of the lid and pin them nice and tidy: 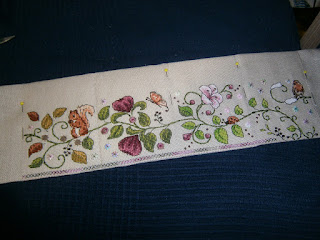 This was the hard part, it turned out - the sewing together was just some backstitch to seperate the panels, and a whole lot of whip stitching to hold it all together! I kind of enjoy whip stitching, even though doing four layers at once seemed a little daunting at first: 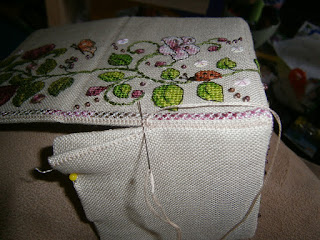 Rinse and repeat everything for the lid, stitch up the biscornu (secured with a cute little crystal from above and below), and here we go! I'll leave you with a couple pretty shots from different angles of the inside and outside: 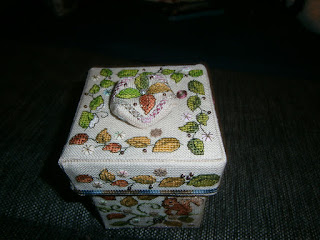 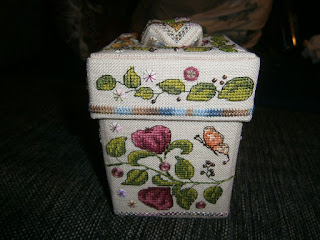 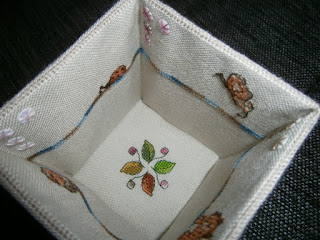 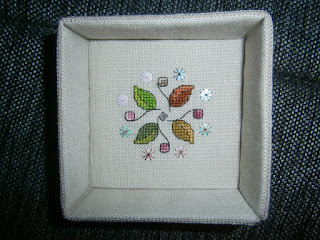 Posted by Leonore Winterer at 23:51

This is absolutely fabulous! I love it!

It is stunning, you've done a fantastic job, what a treasure you have created, beautiful 😍

Absolutely stunning! I think it would take me a few days (or more) to get the courage to cut it up too

Wow, that looks amazping! This has been a great project with so much detail. I love the little biscornu handle on top. It's all gorgeous and you should be very proud of yourself for fully finishing it so well.

Beautiful!! Congrats on the finish!

Wow! Wow! Wow!
Without offending anyone, I want to say this is probably THE BEST THING I've seen during my seven years of blogging! Absolutely gorgeous! :)

WOW!! Great job fully finishing your Zoe box. Your stitching is beautiful and your ffo-ing is perfect.

That looks amazing, it's stitched beautifully and looks wonderful all put together!