After I was very good with my finishes in December, I treated myself to a New Year's start...and a January 3rd finish! Yup, it was a small one, but I'm still happy to have stayed this focused for three days.

I've been meaning to stitch Little House Needleworks' Little Sheep Virtue series for a couple of years now - I own four of the patterns with the called for buttons and fabric for six and probably will boy the others soon. The first of the patterns is 'Hope', and I thought this was a great sentiment to start the new year on, so my first couple of stitches went in shortly after midnight on January 1st. It took me two days to stitch the border and one day for the inside: 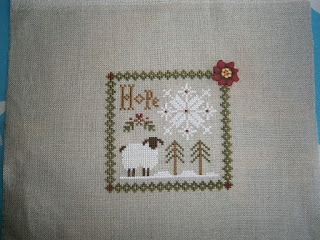 Isn't it cute? I love the little sheep with his fluffy white body and dark legs and head! I'm stitching these on 32ct raw linen that's a little lighter than what was suggested, so I switched out the Ecru charted for the snow and snowflake for a true white (B5200 since I couldn't find any Blanc, but I think it looks good), since it looked a little dirty otherwise. I also had a special colour set aside for the sheep itself - a handdyed by Nina's thread called 'White Sheep' that I'm planning in all of the patterns (or almost all, I think some of the sheep are all brown).

Right now my plans are to start one of these patterns during each of the starting events I'll take part in during the course of the year - they are fun and easy to stitch, and it'll be a good ways into the series! Not sure how to do the finish-finishes yet, but I still have time to decide.

Posted by Leonore Winterer at 20:42

A lovely design to start your 2021 stitching

Congratulations on your first start and finish of 2021! It's definitely a good sentiment to start off the year.
What a good idea to start the remainder during the new start binges, especially as they're fairly small and quick, and won't add to your WIPs. I'll look forward to seeing more woolly sheep in March! :)

I think a lot of us are using Hope as our word to start the year, Leonore! Still hoping over here--it's been a rough week for the United States! Anyway, love your little finish and the colors show us nicely! Looking forward to seeing your next sheep make an appearance ♥

Good start to the year, what a lovely little pattern.

Leonore: It is an adorable design, i love sheep, they are so sweet and gentle looking.
Have a lovely week.

Your sheepie is adorable and I love the poinsettia button too. It's nice to have instant gratification from a small project. Almost instant LOL

It's so adorable, and how nice to finish it so quickly!