Our most wonderful Jo has held a most wonderful monthly SAL for some years now, and this month we have a bit of a special theme - The designer we most stitched. Now most people have interpreted this as 'the designer they have the most WIPs and/or finishes by', and I'll get to that, but I also want to offer two more interpretations! (and just as a disclaimer...and don't really have statistics about any of these measurements, so this is all my best guesstimates!)

So first, let's take things literal...the designer I've most stitched...the designer I spent the most time stitching! I'm pretty sure that for me, this is Teresa Wentzler. I have two big finishes from her, The Mermaid took me a good 300 hours, and I'm convinced that Angel of Frost didn't go too much quicker (especially since I had much less practice at stitching then). I also stitches one of her knotwork bookmarks and spent a good deal of time on the border of Peacock Tapestry. This is the last picture I found of it, but now that I don't have any other TW WIPs, maybe I'll pick it up some time soon... 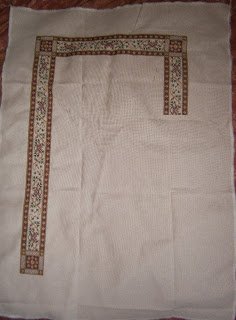 Designer most stitched could also be the designer I did the most stitches by. This would probably be Jody from UnconventionalXStitch - I finished Fire and Ember at 54.200 stitches and already did over 50k on The Puppeteer. I also finished Blookmoon (I think about 8k stitches) and made a start on Kitsune and Sacrifice...both of which I really hope to pick up again soon! 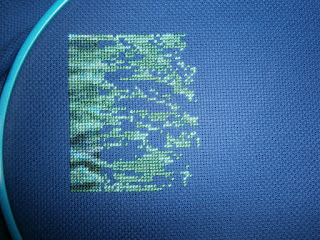 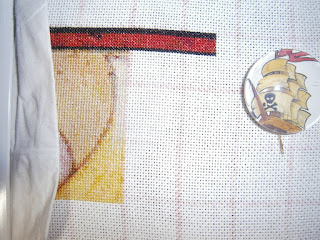 And now to the final interpretation - designer I stitched the most designs by! I think this title goes to Magical525. Her ornaments of the month are probably enough alone to get her that title (even though I still have a couple more to finish!) but I've also been stitching a few of her bigger SALs, the first five of her Mini Mysterys, and six bookmarks this year! She just releases so many pretty and fun patterns, I probably have a hundred more saved that I hope to stitch some day.

Posted by Leonore Winterer at 22:49

Leonore: The ornaments you stitched are beautiful, I bet they look lovely hanging on the tree.
I am a fan of all designers so would not be able to pick just one.

Have a lovely day

I really like those ornaments. I have stitched a couple of her ornaments and still have the NYE SAL to finish.

Thanks for taking part in The People's Choice this month. I love your three interpretations of the theme! I wonder if it would change my results? After all Discworld is only one design and I will have spent almost an entire year on that by the time it is done. It might even win for most stitches. Although Teresa Wentzler would be close with Rapunzel being full coverage and the huge dragon too.

I recognized that border as soon as I saw it lol Good on you to do the border first ;) You'll have a higher success rate to finish

I love your interpretation of this SAL and am jealous I didn't think of it! TW designs are certainly detailed and time consuming so it's no surprise she tops your list, well, one of your three lists! I may have to go and check out Magical - she pops up everywhere but so far I've resisted temptation! :)