We're almost ten days into July and I still owe you my SALs for June - let's change that! This time, was wasn't quite as much behind, actually stitching the blackwork and bookmark while it was still June, and finishing the temperature stitch during the first couple days of the new month.

First off is the bookmark - you've already seen this one before the finishing in all it's 8ct glory. I finished it as suggested, which was by cutting a second, identical sizes piece of fabric for the back, and sewing them together with a fancy edge. Now the original finish was meant for perforated felt so I was a little nervous about fraying, but it went pretty well - one corner turned out a little wonky as I pulled the thread too hard, but I think it's barely noticable. 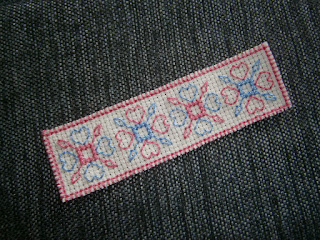 I think it's actually one of my favourites so far in it's simplicity!

Next is the blackwork SAL. Again, I got to add to motifs this month, and again I did two full crosses as I really enjoyed the patterns. (I also just realized how dirty my couch is after taking this picture, so please ignore the crumbs!). 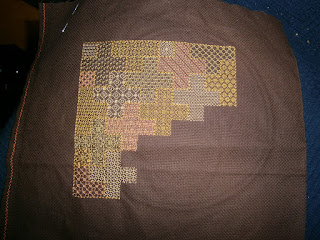 Hard to believe that this is just halfway through the year, eh? We had slightly 'too many' patterns released per month for the first couple of months, so we only get two now. Apparently that will still make have two too many, but I have some plans on what to do with them.

Last but not least, the temperature SAL! June was a bit unsteady, so we have a good amount of yellows and oranges (including a new colour for 26°), but also some greens. So far July seems to be more of the same, but we'll see how that turns out. 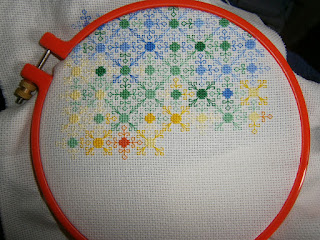 Posted by Leonore Winterer at 20:05

Nice work on the SALs. The bookmark is lovely, the blackwork is growing nicely and the Temperature SAL is just gorgeous!

The temperature stitching is so cheery! You must have quite a stock of bookmarks, what a great idea to have them made up ahead of time.

It all looks so nice! I love all the bright colors in the temperature SAL! I love lots of color!

Great SALs! I still can't get over your use of 8ct binca. The holes must have seemed huge! :)