I'm a little late again, flying in just under the radar before the month is over ;)  I have a good excuse though, I promise! But first, the question of the month:  What new charts or designers are catching your eye this year? I have to admit, I've mostly been stitching old favourites this year so far, so I haven't actually tried anyone real new this year. One that has been catching my eye a lot lately, especially because of the extremely popular blackwork SAL she's hosting, is Peppermint Purple. She has some absolutely stunning blackwork patterns, I really want to stitch her world map and maybe the bee hive one!
But now for something more exciting and the reason why I'm late - I took a couple extra days to actually finish the first colour on The Loneliness of Autumn! I am caught up on stitching up until the 29th and that was just enough to finish the 939. That is 16.670 stitches or 14.03% done! 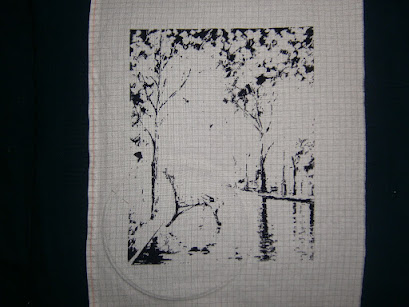 So far, I've spent 91:56h on this. I think it's amazing how much of the design is recognizable already! Next up are a bit over 11k stitches of 3371, a very dark brown. Judging by the image on PK, that colour won't really show anything new but 'fortify' what's visible already, just making the excisting stitching a little more dense. With any luck I'll get this done by the end of the year and it should bump me up to about 25% too! So, guess there won't be a more excisting colour for me, but that's alright, I'm pretty content with the progress I am making ^_^
Now if you want, you can hop over to Rachel's, whom I'm SALing this with. She just finished her second colour and starting the third, so things are very exciting over there as well!
Posted by Leonore Winterer at 23:55

I like this. I took a look at Rachel's too.

I'm sort of surprised you're not already stitching the blackwork SAL. I would love to see your interpretation of the colours.
Woo-hoo, congratulations on finishing your first colour on TLOA! I'm sorry the second colour is not a lot different to the first, but watching the picture grow, or be filled in, will still be exciting! :)

Lovely progress this month. You really can see the picture already.
I like the blackwork designs as well, there are some great versions on different blogs.

I've seen the PP bee hive and that's one I've been wanting to stitch too. Hopefully sooner than later!
Your Loneliness of Autumn is coming along nicely, it even looks cool as is.