So it feels like the new month has barely started...but it's already more than a week in! Which might explain why I'm already a couple of blog posts behind again. Yet again I'm having big plans to get caught up soonish (at least my reading and commenting is less than a week behind now!) so we'll see how that goes - for today, at least, we have my June crafty pies to talk about! 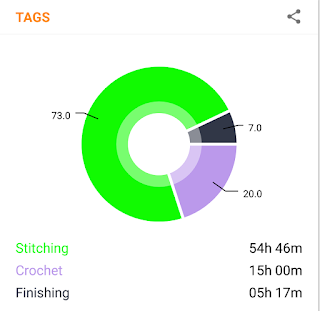 As you can see, I've been a bit more monogamous this month. Mostly stitching, but a good deal of crochet too (and some finishing, but that was mostly sewing crocheted pieces together!). Now to look at it on a per-project basis... 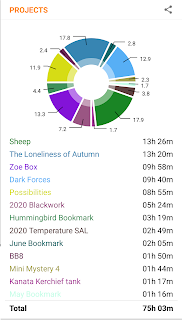 It looks like a lot, but was actually quite focused! Of my three crochet projects, two are finished (BB8 and the Sheep, the latter of which will be in my GG post next week). Stitchingwise, I finished the Hummingbird, May Bookmark, and Mini Mystery 4 (which you've already seen), did my monthly bit on the SALs (Blackwork, Bookmark, Temperature, which I'll post about soon, and TLOA, which I already did post about), as well as one rotation each on Dark Forces, Possibilities, and the Zoe Box. I kind of hope to get back to four rotations a month in July, but we'll see how that goes.

So the only thing I haven't really talked about lately is the Kanata Kerchief Top. I think I showed this one once when I started it, in September '18. It's a bit of a stash buster project as I've had a ton of this purple yarn for ages with no real plan what to use it for, and finally found this pattern which I think works nicely! While I still have a lot of baby projects to work on, I'm trying to finish something from my WIP list in between too, and this one shouldn't take too much longer. With the work I put in in June and this month, I finished the third panel and made a start of the forth, so hopefully I'll get to assembly soon: 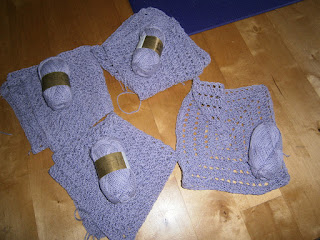 Depending on how much yarn I have over, I might try to make a matching hat or something. I really want this gone from my stash, as pretty as it may be!
Posted by Leonore Winterer at 09:00

I’m always amazed by the number of hours you consistently do each month! Well done.

Nice pies! Good to see plenty of stitching time in there.
The purple wool is very pretty too.

Great work for the month again, and on so many projects. Do you think you could ever become a One At A Time stitcher? :)