I love signing up for SALs, but I also have my own personal crafting goals to accomplish - so I've been trying to pick the ones that don't interfere, or go really well with my usual stitching. And over the last couple years, I've become quite good at it...maybe too good, because these days, I feel like I'm posting everything I do at least twice for the different checkins! So, to not bore you, I'll try to avoid that in this post, and just link to what I already showed instead, and only talk about the new stuff. Let's see, gift stuff...since the last GG, I finished The Little Monkey, which was a traveling pattern from Chiara (which reminds me, I need to check the tracking info to see if it has reached the next stitcher yet). I also finished another Baby Surprise Jacket and, more importantly, my Baby Blanket CAL! And last but not least, I stitched a Valentine's Card for my husband.

No, my focus is back to what will probably my biggest gift project of the year: The Mermaid by Theresa Wentzler. I should finish it before July for my dad's 60th birthday...I'm not sure if that is still possible with how much I got sidetracked, but I'll certainly try my best! Over the last week, I finally managed to finished the section of sea I've been working on: 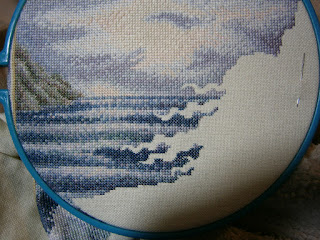 If you know the pattern, you might have realized that there actually is another bit of sea beneath her arm, and yet more at the very bottom. I'lle get to that later. For know, I will more or less work my way down, that is, stitch her hair, then start on the rock...but even before all that, I will work on the border a bit, filling in all the blue-ish/green-ish stitches outside the sea shells. That's only three colours, so I pulled them out and I think this part will actually be going pretty fast - I hope to stitch hair by next weekend! 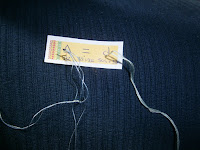 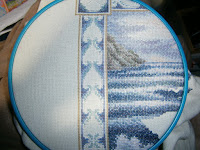 Posted by Leonore Winterer at 22:34

Beautiful stitching! You can do this! :D

This is very pretty. Your dad will love it!

I could never be bored seeing the mermaid project! It's becoming so gorgeous I really am excited to see it finished!

Love the calming blues in The Mermaid so far. I'm not aware of the design, and am not going to look it up, so will enjoy watching your progress. :)

It looks lovely so far, I'm looking forward to seeing her appear!

Thanks! I'm starking to think I can as well ^_^

Just like I never tire of stitching on it - every section is different!

I know you can!