I did IHSW this month, before/after pictures and all! I made plans, and then I stuck to some of them, and abandoned others, but I guess that's just how it goes with plans.

My plans were to quickly catch up on my SALs, then stitch a ton on The Mermaid. Well...the SAL part went alright. First I picked up the Temperature SAL - I've gotten into the habit of working on this every weekend and adding the seven symbols of the current week. Here it is before and after: 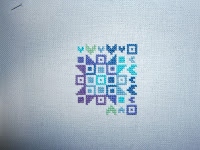 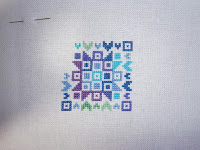 Next I picked up The Mamluk SAL as part 2 had just come out a week ago. This was a little more to stitch, but still went quickly. I got to pick the second colour, and I'm more than happy with my choice so far! 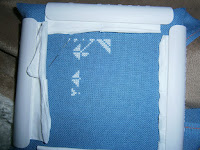 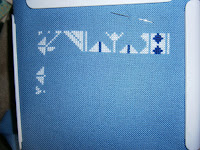 So now it was time for the Mermaid...but then I had Whacky Witches in Stitches out, since I have declared it a focus project in the 'Finish it in...' SAL, I had been working on it a bit. It's one of the few projects I'm stitching on scroll bars, and as it's quite bulky, it kept getting in the way. I was really close to finishing the next block, too...so finally I broke down and just finished it: 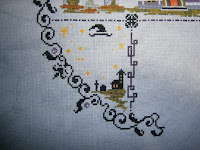 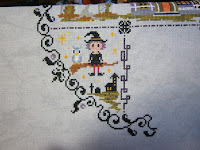 The Mermaid only saw a couple dozen stitches in the end, but now (without the distraction of those witches) I've been working on it for a few days and I'm getting back into the flow. I'll have progress to show soon!

Glad you had a good IHSW. Everything's looking lovely, especially the little witch. :)

That temperature SAL is so lovely! Congratulations on another section of Whacky Witches finished!

Great work over the weekend, even if it wasn't the planned project! The Witches does look good.

And so much fun too! Thank you - it would be nice to actually finish it this year, but the Mermaid is more important :)

Your IHSW was successful even with the surprise of a different project getting in the way. At least it was a super cute witch!