...and I went and disappeared from my blog again for two weeks. Sorry about that! I missed IHWS (well, I didn't really miss-miss it, but I didn't feel all that stitchty that weekend, didn't get a lot done and just skipped the blogging) and there are just not that many checkins in the second half of the month. There is WIPocalypse though (to which I am a couple days late because I caught some nasty stomach bug last weekend), so here we go!

The question for the month one of my favourites - What SALs are you participating in this year? This year, I have three year-long actually-stitching-along SALs (on top of our yearly Halloween SAL, that runs from August to October and that I will tell you more about once we decided on a pattern) as well as a couple of low-effort, blogging SALs.

You already know the first of my stitching SALs - Hetti's Temperature SAL. I seem to be working on this roughly once a week to stitch the squares for the last few days, and I'm actually caught up to last Sunday. We had a bit of a cold spell (average temperatures below freezing), which brought a pretty new purple, and than an uncharacteristically warm day, which brought that one green heart, but I think we are back to a typical southern German January for now. I'm very glad to not life in the mid US right now, with all that arctic cold incoming, and hope everyone who does live there will be safe! 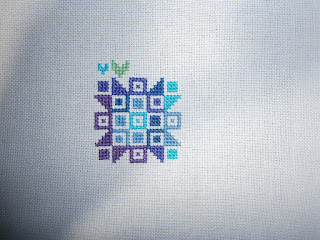 The other two SALs are hosted by my friend Magical525 and are released in monthly parts on the second and fourth Tuesday of the month, respectively (she does have SALs on the first and second Tuesday too, but I only have so much time). The first his her Mamluk SAL, which is actually really cool. Magical does a lot of pattern inspired by old manuscripts, or her Weavers Band SAL that was very popular last year (and is back this year for a second installment), and this one is designed after a scrap of stitched fabric that was found in Egypt and is supposed to be up to 800 years old! I played with the colours a bit, choosing white on blue instead of brown on beige, and I'm thinking a nice rich darker blue was the secondary colour...although I still need to pick that one! I stitched part one as it was released - the shapes of some months are a little odd to even out the stitch count: 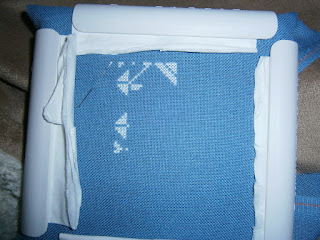 The second is her Blackwork SAL. For this one, she gave a colour scheme that I decided to follow (for now) and after finishing the basic shape, filling in each month will be way quick. I really don't know why I don't do more blackwork, and this way I'll at least do a little each month. 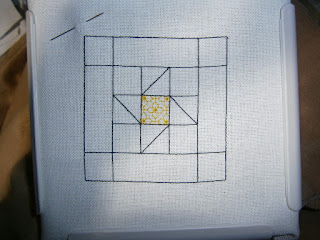 
Hope I didn't forget anything!

Of course I'm also doing my own '-19 in '19' this year, and that's been going...not so well, this far. Small wonder, though, with three new starts for the three SALs alone! It's all good, though, as those will all be finished within the year, right? I also started the Valentine's stitch I had you vote for in my last post (elephants won).

I also finished the NYA SAL - stitched up the back and turned it into this cute little (not very little, though) biscornu: 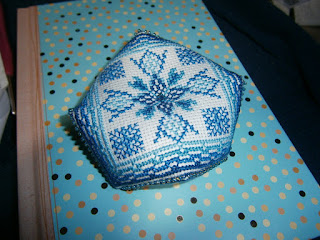 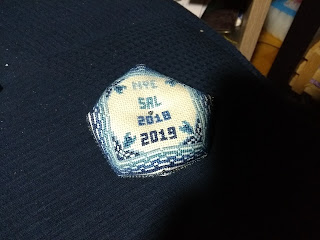 I also finished Smooth Sailor, a vest/shawl/loop/versatile thing from the 2016(?) StrichMich! Club. I completed the knitting in December and only had to weave in the loose ends and wash/dry it, and it's lovely! The yarn is Manos del Uruguay Marina in the special colour 'Martina's Berry Pie' and it's incredibly soft and light, only 100g/800m. I'm sure I'll use it again in the future. 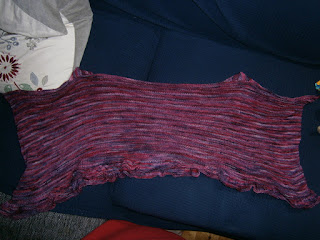 The Little Monkey was finished as well. I used Chiara's DMC conversion and while I mostly loved how it came out, I'm not super pleased with the banana. The yellows she picked are lighter than the ones included with the kit, so the contrast to the orange is much greater...I'm not sure if I like the effect that has or if I might go back and replace it. What do you think? Otherwise, I really like how the little guy turned out! 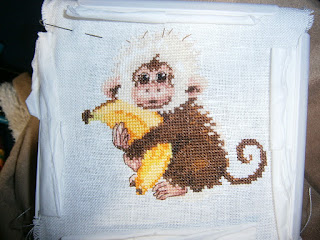 Last but not least, I've been working on my Rainbow Baby Blanket. This has more than doubled in size since the beginning of the year! I really enjoy working on it. Technically, it's finished (well, apart from adding the border), but I'm not satisfied with the size yet. It was supposed to be 60x90cm, but for some reason mine turned out a little wieder (about 65cm) and a lot shorter (just below 70cm!). So I'll add a little more to it, I think about 30 or 40 rows should do. I'm still on the first ball of yarn for some colours, and barely started the second ball for the others, so there's plenty of yarn to go! 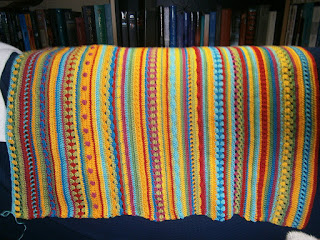 In total, that brings me to 50 WIPs, or +1. That's the magical number I swore myself not to cross, so I'll have to bring it down a little before the next check in!

Posted by Leonore Winterer at 16:42

Great progress this month! I think the Monkey is adorable and the banana colors are just right. The rainbow blanket is gorgeous and great start on the blackwork SAL. Glad you are feeling better.

I'm loving your temperature SAL! You have accomplished so much! The shawl is finished and gorgeous, I agree about the banana...the darker orange is a little off, and the baby blanket is lovely.

Your projects are all lovely Leonore. I think the monkey and banana look great. I'm loving your blanket. The colors are so pretty.

You have some great things going on! I think the banana is fine - cute monkey. You should link your temperature project up with Sarah Did It. https://sarahdidit.blogspot.com She and I are doing hexagons, but she said any type of temperature project is welcome. The link ups are on Wednesdays. I am planning to finish what I start and hopedully finish a few older projects this year.

You have been busy this month! Love the colours in the Temperature SAL, and the Biscornu finish is cute. On my monitor the banana looks fine; love how the little chap is holding it so tightly! :)

Oh, I think that monkey is adorable--and his banana looks just fine to me! Your rainbow blanket is so beautiful! How big will it be when finished? The colors remind me of one my dear grandmother had on the back of her couch for many, many years!

Hope you have a great February ♥

Nice progress in spite of your setback.
This week we've had it extremely cold in the single digits, and next week it's supposed to be in the 50-60's, crazy weather!
Your SALs looks like fun, especially the Blackwork one, that's tempting.
Your NYA SAL looks good and I love the monkey! The baby blanket is so colourful, I love it!

Thank you! I didn't feel very accomplished this month because my numbers only went up, never down, but seeing things lined up like this, it wasn't too bad at all.

Thank you! As you saw, a lot of the things on my WIP master list really are small and absolutely silly to not be finished...I will be getting there.

Thank you! It's a lot of fun working with all these happy colours.

I like the banana, though orange is a bit of an odd color for one. Is there supposed to be more backstitching on it? That tends to moderate weird colors. The blanket is amazingly happy.

Was the frigid weather in the US a topic on y'all's news or is that because we've all been complaining about it on blogland/facebook? LOL.

You were certainly busy in January! Nice start on the Temperature SAL, colder than it has been here.
Love that cute little monkey, his banana looks fine to me.
The rainbow blanket is gorgeous too.