Hello, lovely people!
Yes I know, I am as shocked as you are to be this on time for yet another checkin...could this be a new trend?! If so, I don't want to jinx it, so let's dive right in!

It's time for Gifted Gorgeousness, the SAL for anything gifty or gifted, hosted by the lovely Jo over at Serendipitous Stitching (whose blog and SAL make sure I never forget how to type these pretty impressive words).

So, since the beginning of the year, I mainly worked on two qualifying projects. One is the Baby Blanket CAL, which is actually going a lot faster than I thought it would go - I even might be able to make my early February deadline! I picked it up on Saturday and have since finished part 7 (two rows or so remaining) and all of parts 8 and 9. Each part is 10 rows, so I did 22 rows or almost 15 cm/6" in less than a week. There are only three parts (plus a border) left now, but judging from the current measurements, the blanket will be more square than blanket-shaped at that point, so I might repeat some parts of it. Which should be okay since it's going so fast and I'm still on the first set of yarn (I bought two balls of each colour). And I am surely having a lot of fun with this super colourful project! 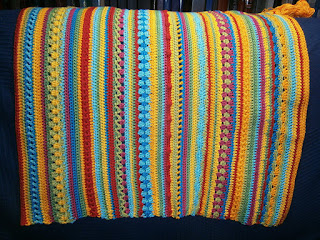 The other project I want to show you is a traveling pattern Chiara from The Grey Tail started. It's a Russian kit for a little monkey, and I was first in line to stitch it and got the pattern in early December. Well...Christmas happened, and stitching it didn't happen, but now that I finally started, it's going pretty fast and I hope to soon be able to send it on! I'm using the FMC colour conversion Chiara made and a piece of white linen. I think he will be super cute once he's done! 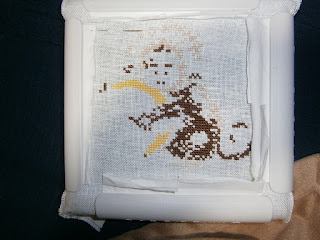 I also did a little knitting on the next BSJ and started the second ball of yarn, but it won't be interesting enough to show again until I actually finish - hopefully soon!

Now before I end this post, I have one more GG related question to ask you. For the past two years, I've been stitching Valentine's cards for Felix from this set that was published in the Cross Stitch Collection magazine, February 2014: 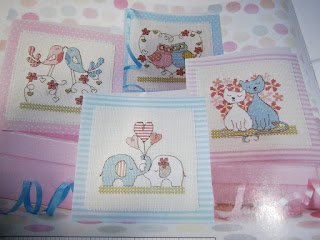 I already did the lovebirds and the cats, so this year I have a choice of either owls or elephants, and I can't decide! So, you need to help me. Please cast your vote on which one it'll be this year. I'll count and pick once the Little Monkey is done - probably this coming weekend :)

Your Baby Blanket is lovely, great colours. It will be interesting to see Little Monkey appear. That's a cute set of card designs, I vote for the owls.

Nice progress on your projects Leonore. I vote for the owls.

Those cards are just lovely.

Wunderbar! Your blanket is so pretty, and I am intrigued by your monkey. Looking forward to seeing it finished.

I vote for the elephants. That baby blanket is gorgeous!

Thanks for taking part in GG this month. Love the colours in the baby blanket.
I vote for elephants for this year's card.

Either is cute, but I'd choose the elephants.

I will always love the colors in that baby blanket! It's so... happy! I love the little love cats but you've already done that one (was it the first choice? :D) so I will choose elephants. I like their balloons!

The blanket looks lovely, so colourful!
Your monkey will be cute when it's done, it looks good so far.
Both the owls and elephants are adorable! Which one did you give him last? If it was the birds, then maybe the elephants. Otherwise, the owls?

Elephants! They are so cute, Leonore :) Love your blanket--I'm sure you'll finish on time... And I look forward to seeing that cute monkey all stitched up :) Have a great weekend!

Hi Leonore, your CAL looks lovely!
The monkey is growing well too. Either the owls or elephants would be lovely but I think I’d have to say owls ...... I have a little owl statuette looking at me saying “us, us”! Tee hee!
Look forward to seeing it!
Hugs,
Barbara xx

The blanket for baby is looking beautiful, bright and happy colours. With regards to the stitched valentine designs, I like both the elephants and owls, perhaps I´d stitch the owls.

Thank you! Your vote has been counted :)

No surprise there, haha!

Thank you :) Your vote has been counted!