Just a few days late this time...work and travel and other obligations are still taking their toll on my, but it's finally starting to calm down, if only a little. More crafting time, more gaming time, and, since Felix is still away for the rest of the week, a whole lot more "me" time, which I enjoyed at first but I think I'm about ready to have him back now, thank you!

This month's WIPocalypse question is "What are your oldest and your newest WIPs?". The newest one is easy - that would be a new pair of socks that I started shortly after finishing the latest wristwarmers. Another pair for Felix' dad who loved the ones we (Felix' sister and I, one pair each) made him for christmas, so he requested some more, and he'll be getting those for Christmas again. So far, I've done the band and about one and a half repetitions of the pattern. I really like this yarn, it's a nice lightly variegated blue. 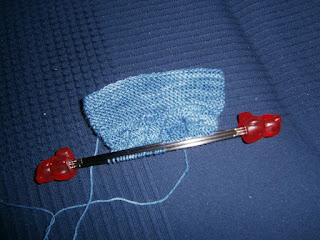 For oldest, I have to go back a little - I have some really old unfinished stuff, but I mostly devide my stitching into 'before I discovered the variety of stuff that's avaiable on the internet', when I would stitch everything I could get my hands on, and after, when I could be a bit more choosy. So technically I have some 'WIPs' from before than, but I'm undecided on whether I really want to finish them, so I'll consider them UFOs for now and show you my first WIP from the 'after' phase, which I started on 1/1/14 - TW's Peacock Tapestry! 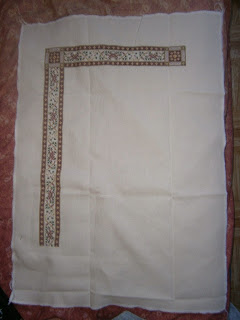 This is the last complete picture I have of it, although I think I have since done the lower left corner and started on the right side too. I really need to get back to this sometime...

Now, to my more recent projects. I have continued to work on several SALs, and succeeded in getting/staying up to date with all of them!

The forth installment of the Steochalong (we have since done part 5 and now have a pretty good idea of what it's going to be, but for you, it's going to stay a mystery for another week): 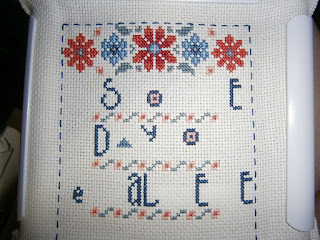 Part 4 of the Lizzie Wallet - Part 5 and 6 have been released now with a total finishing time of three weeks, and they are just section 1 and 2 again bit mirrored. I might not start on them until next week. 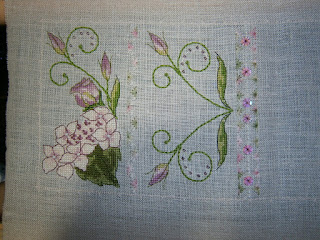 Part 2 of the Arke CAL - only ten rows this time and another ten for this week, but the rows are getting longer and longer so this is taking more and more time. Still a lot of fun, though! 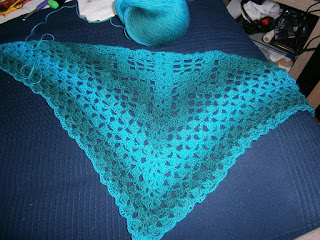 And finally, I finished the next page of the Fire and Ember SAL just in time before July was over. It's starting to get interesting with the dragon, I might reach some eye and/or mouth! 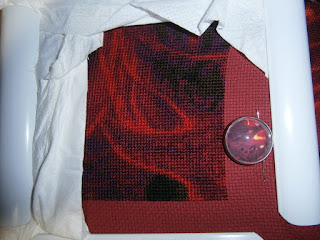 Lastly, but not SAL related, I also wanted to share some progress I made on my berry sailor on my most recent work trip (Fri/Sat of last week). You can really see the vest-like shape of this now, but it's just going to be more of the same for quite some time, so I won't share my progress too often so it won't get boring! 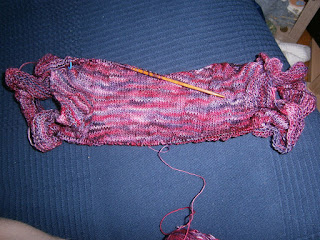 Posted by Leonore Winterer at 17:11

Great progress on everything and so good to hear your socks were well-loved. :)

Awesome progress on everything Leonore.

That wallet is gorgeous! Nice progress on all your projects.

Fabulous progress on all your projects, you have been busy in July :)

Great work. The Lizzie Wallet is gorgeous!
I am guessing something like Summer Days Challenge? Some Days are a Challenge?

You have been busy! I really love the Lizzie wallet and the Steoch along looks like fun. I can't guess what it's going to say!

Fantastic progress on everything!

Fantastic progress on everything - you have been very busy! x