My life continues to be busier than I like it. Again, some was good busy (we took a four day weekend together with two friends in Munich and went to see the London 'Cats' cast on tour), other things were not so good (Felix being away for so long, lots and lots of work) and then there were things that were very, very non-good (my grandpa falling down another set of stairs yesterday - thankfully, we could take him to the doctor right away and, apart from some bruises and cuts and a sprained wrist, he's fine - he'll be sore and look the part for a few days, though). So crafting is still a bit of a side note - not that I don't want to, but it's hard to find the time! Still, some things got done again.

First, there was the 5th release of the Steochalong, which was stiched up quickly - the flowers at the top are finished, and there is enough of the text to guess it (I didn't, but a few people did, and with the newest release it turned out to be right). If you are like me, you'll see what it says next week ;) 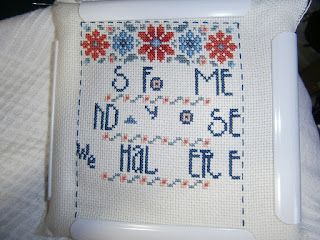 Then, I had a new start on August 1st. Over the last two years or so, my friend Ashley released those GORGEOUS cross stitch versions of Hannah Alexanders Mucha-style Disney princess redesigns, and of course I had to get them all - to support her, but also because most of them were/are limited edition and I could not bear not having one of them! So I had no less than 18 of those lovely patterns, but yet to start one, and when Ashley announced a fun little 'do 1000 stitches on a princess' challenge for August, I knew my time had come. Deciding which one to start was hard, but I finally settled for going chronologically (by release of the movies), so Snow White will be the first, and I added her to my rotation as another 'One length of thread a day' thing (although I enjoy stitching her so much that I did the whole first week within two days). Here is this first week of progress: 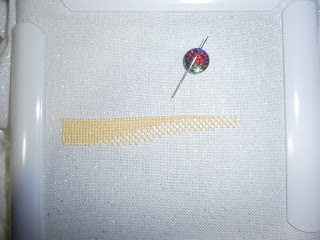 By the way, I know I've had quite a few starts recently, and if that upsets you in any way I am sorry...but there will be a few more yet to come in the following weeks. I will try to have a few finishes as well to balance things out, though!

When I was at my grandparents last week (that was before grandpa decided the buttom of the stairs was so much nicer a place to be than the top) I got to work a bit on my blackwork water lilies. I had worked on them on and off, whenever I found the time to add a petal or so, but now I finally have enough progress to show - I'm ready to move the snap, and anxious to squish that delicious blackwork! I will be very careful. There will be beads added to the top of that golden stuff in the middle, but that will happen in the very end. 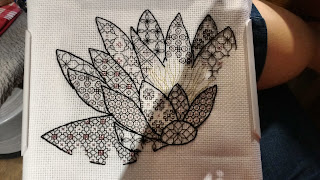 Then along came Friday and out trip to Munich. Felix came there directly from his business trip, so there were only three of us in the bus, and I got to work on my crochet - I finished part three of the Arke CAL, another set of waves. I really enjoy this one, and I am now getting close to finishing my first ball of yarn - I do have another one and hope that will be enough, or I will have to order more! Also, it's getting so big now that I'm having troubles fitting the whole thing in one picture. 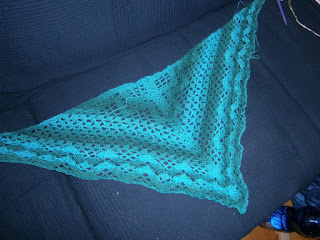 In Munich we did some sight seeing, saw an awesome production of Cats, went to the German museum (science and technical stuff, very interesting and fun with lots of do it yourself experiments!) - and we also did some shopping! I had found a wonderful yarn store online, so I dragged Felix there and spent a wonderful hour or two looking through delicious yarn and picking out a few things. 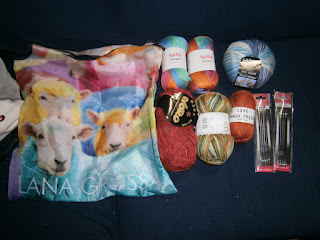 I was good, though, and only got things I have plans for - the sock yarn will be socks, of course (the blue one is a silk blend while the green/orange-y one is made with a bamboo fibre), as will be the Noro Silk Garden - I already have a pattern in mind for this one, which is what I needed those extra needles for. The Lang Yarn Tweed will be another pair of wrist warmers or two ("How many more of those are you planning to make?!" asks Felix...sweet summer child!) and the colourful cotton will be a light summer shawl. And of course I had to get that tote with the rainbow sheep!

While in Munich, of course I didn't have a lot of time for crafting, but I did manage a thread here and there on Fire and Ember, and of course there was also the trip back...so I did get a nice chunk done of my weekend work, about one and a half colours and, I guess, about 450 stitches. More to come this next weekend, if nothing unexpected comes up! 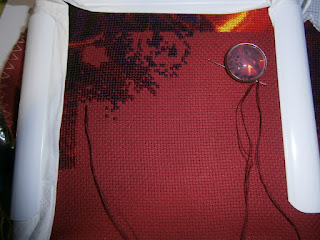 Posted by Leonore Winterer at 23:10

I really like your Blackwork piece! I, too, start new projects and have many in the works and unfinished and it's okay.

Sorry to read about your grandad, what a relief to know he is not badly hurt, except for the nasty bruises.
Great stitching progress and I can't wait to see more of your latest start, those princesses look great and it seems you have plenty to keep you entertained ;) Doesn't matter about all the new starts, as long as you're having fun stitching and working on those projects, then who are we to judge you!

I'm so happy to see your blackwork again, it's so beautifully stitched! that shawl is lovely too and great colour for wrist warmers. I think you had to get that one now so you can make some autumn-themed ones. :) Great sock yarn too and you could say you're starting your Xmas shopping early :D

Also, very glad your Grandpa is okay! So scary. My Grandma that has passed on fell down her cement stairs once and scared the heck out of us. Fortunately hard-headedness seems to run in the family.

Gosh, you have been busy! The blackwork is gorgeous, I feel like it's been a while since we saw that?
Sorry to hear about Grandad, could it be time for a bungalow or maybe a stairlift!
Nice knitting stash too.

I don't know how you manage to fit it all in! Your trip to Munich sounds like fun. I love the rainbow sheep on your tote bag!

Sorry to hear about your grandad, glad to know it was not serious.