So recently I've been saying that I have no time a lot...which is kind of true, we are either going away or have big plans here almost every weekend, and we are busy almost every evening of the week as well. For example last weekend my friend Mari from Hamburg visited and we went to an escape room (our first, she had done several before) and it was awesome!
But when I look at my weekly crafting progress, that can't be quite true, because I did do quite a lot. On the other hand, I had all the pictures in this post taken by monday and only get to write about them today...something is strange about time. I will investigate.

So, I have been working on my SALs. Since the Coloris thread and some sequins I bought arrived, I could do part 3 of the Lizzie Wallet SAL (also using more of those lovely sparkly beads), and I loved doing this one. Technically I am still one part behind, but it was a two-week-part, meaning I still have this week to finish before a new one will be released. 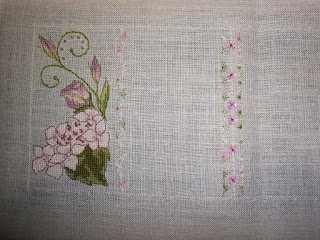 I also finished part three of the Steochalong, and I'm still pretty clueless what it's going to be! I finished this one on Monday, so actually a day late, but I think I'll get caught up this week. 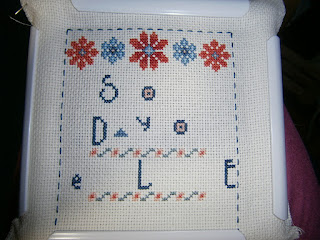 Then I spent what time I had on the weekend working on my Fire and Ember SAL, finishing the three colours I ran out of last weekend. It was quite a bit of stitching, but I just love how it looks! Not much more left now, so I think I will be able to finish the page this upcoming weekend, just in time. 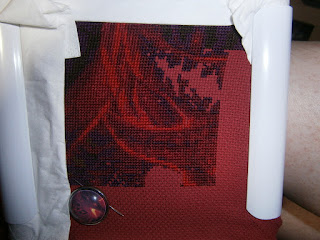 I've also been stitching on the Puppeteer, one length of black a day - sometimes a little more, since I am still behind on this be almost a month. In any case, I managed another page finish, page 5. The remaining two pages of the first row are, as far as I recall, almost completely black, so it's going to be a lot of stitching but also quick going without counting! 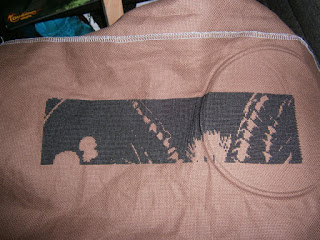 I realize that I do have more than enough SALs on the go already, but when people in a German crochet group I'm in started posting pictures of their first part of the Arke CAL by Maschenzaehler, I just couldn't help myself - it's so pretty! So I got some new yarn (I've been wanting to do something with this particular colour for quite a while) and crocheted the first 14 rows all in one evening - it's a fun pattern and quick going! You can check it out here - the description is in German, but there are also diagrams you can work from. 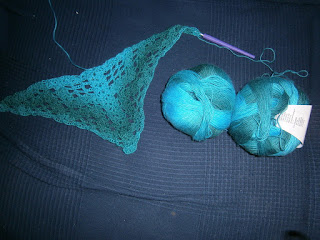 Another new start I had this weekend...Mari brought my a knitting set for a cat she bought some time ago, thinking she could make it herself, but it has that extremely fluffy yarn that's not easy to work with, so instead she asked me to make it for her. I made a little start on the body of the cat, but this yarn really is a bit taxing to work with, so I'll probably just do a little bit here and there. 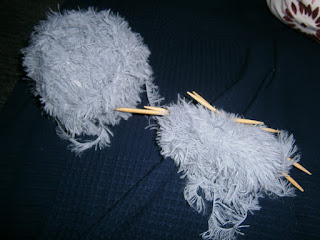 Last but not least, I also had a finish! I used the leftovers from the socks for Felix I finished a while back on another pair of wristwarmers, and since I didn't have quite enough I decided to go assymetrical and do one of them stripped. I really really like the look of that and it was so much fun to knit as well! Originally I was doing those for myself, but my grandma saw them and fell in love so have them she shall. I can always make more. 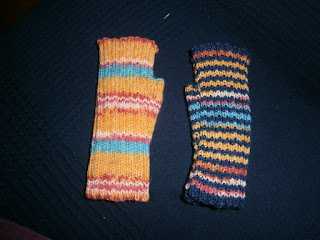 So that's it for today - I'll see you next week with another installment of all those SALs and the CAL and who knows what else!
Posted by Leonore Winterer at 09:18

I'm extremely busy this time of year too. But you are making beautiful progress anyway. Great job on all your projects!!

Wonderful progress on your projects, love the mismatched wrist warmers! At the moment the cat looks like two balls of the fluffy wool, rather than actual knitting but I'm sure that will change.
What's an escape room? Very intrigued by that.

I think you got a lot done! Your stitching looks wonderful and I love your new crochet project =) I am also looking forward to see more of the cat, I tried some amigurumi so far (I once did a baby giraffe and a mini Cthulu once... Cthulu was really cute...) and it was fun ;-) So far, the cat looks super fluffy ;-)

Wow, you get a lot accomplished with no time! You really have been busy, everything is coming along nicely. I don't blame your Grandma for wanting your gloves!