And another week of desperately trying to catch up with the Alphabet Club SAL! First to the stitching part - the letter is L, and here is a little lamb, or German 'Lamm'. 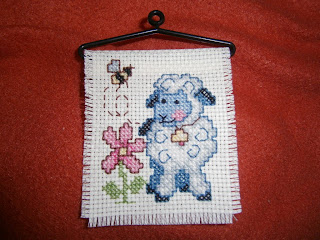 The 'L' word I chose is another one that is...well, not exactly in-translatable, but I guess it's more picturesque than the English equivalent - 'Luftschloss', literally 'air castle'. Building air castles ('Luftschlösser bauen') means the act of daydreaming, and dreaming big - like, for example, dreaming about being a princess and living in a castle, which is where I'm guessing the word comes from. And people say Germans are to practical!
Posted by Leonore Winterer at 15:21

Cute little lamb! I live in a country that has princesses - I wonder what they dream about being.

That is certainly a sweet little lamb finish! :)

Congrats on the cute finish Leonore.

Cute lamb and a wonderful word!
I like Pamela's comment. Our Princess Charlotte is very little so she probably dreams of ponies and magic like most little girls!

Lovely little finish! I'm sure there is an English phrase about building castles in the sky. I think Princesses would dream about ruling the kingdom!

Such a sweet finish! A sky castle sounds wonderful, maybe dreaming to be able to stitch away with no worries?!

Oh what an adorable little lamb. Thanks for sharing the L info.