I think I'm actually two days late for this - my mind kept telling me 'last day of the month' when in reality, I think it's the last sunday, but that just means you get two more days worth of stitching to look at! Not that I have too much time to stitch to begin with (because of good stuff, mostly, but still stuff cutting into my me-time), but progress is progress!

Let's start with this month's conversation topic: What Stitch-a-Longs (SALs) are you participating in this year? On the blogging side, I'm a bit boring, following just the same ones as last year - this here WIPocalypse, Jo's Gifted Gorgeousness, and IHSW when I remember it. I'm also trying to catch up on the Alphabet Club, since I am several months behind. On the actual stitching side, I'm still mostly on track with the one-page-a-month Fire and Ember SAL, and I bought the two SALs from Lakeside Needlecraft, the Fantasy and the Under the Sea one and also the Under the Sea by Ship's Manor, but I haven't started any of those yet and will probably stitch them at my own pace later.

Now for my actual progress: 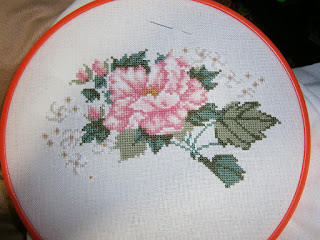 I've been working on my 'mystery' new years start and completed the flowery part by adding those little white flowers. From now on, the actual shape is going to become more and more obvious! I'm actually a bit further than this, but I wanted to show you just the flower because I think it will look strange-ish for a bit now. This is where I am at: 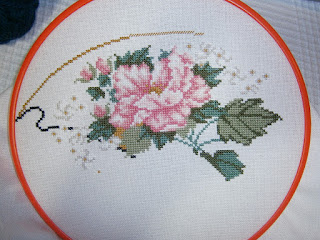 Can you guess the shape yet?

I've also been working on the Fire and Ember SAL - stitching along that edge is still going slowly, but I think it's turning out a-okay. I'm not quite finished with the page, so I am technically late on this for the first time, but it shouldn't take more than a few days to catch up. 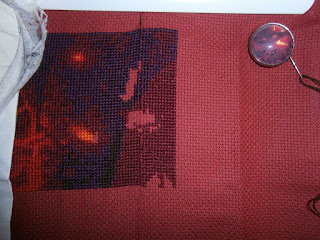 I've been working on Felix' sock, and I'm almost ready to turn the heal - I think I want the leg to be a tiny bit longer, but I'm not sure yet. I will decide soon, though. 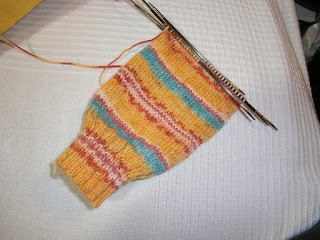 And last but not least, here is my start on the Puppeteer. Those are nine days of stitching, so one and a half of the 240 meteres of black - 460 stitches. I'm avaraging around 50 stitches a day, taking anywhere between 13 and 20 minutes. I like the progress so far, but as this page is mostly black, it will still be about a month before it's finished, I guess. 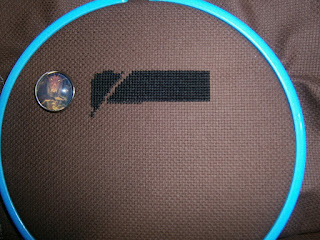 Posted by Leonore Winterer at 07:52

The flower is gorgeous! I love the knitted socks, but don't knit myself, so I admire those who do.

You have been busy!
The flower design is gorgeous and you've made great progress.

The Puppeteer is going to be awe and is a nice contrast to the pretty pink flowers.

Love all of your projects Leonore and nice progress.

The flower is gorgeous and great progress with them all.

Nice progress on everything and I'm curious what that initial flower will turn into.

Hi Leonore,
Please hop over to my blog... you're the winner of my giveaway :)

Hello Leonore. I found you through Mii's blog. Congrats on winning the snowman chart. I'm in love with your Puppeteer and Fire and Ember piece. Wow! So I decided I'd become a new follower of your blog. I look forward to getting to know you more.

I like the flower stitch. Not sure on the shape though. I can't wait for a reveal hehe.

I vote for either an eye or a fan shape. Most probably a fan though!
Glad you'll be doing my GG SAL this year and catching up with the Alphabet Club. Because I have decided what's replacing that after we get to Z!