I'm so far behind on this SAL it hurts, but I still believe I can catch up! ... hopefully. So, first step in the right direction, the letter is 'J' and my stitching is Magicals January Ornament from two years ago (I could have picked June or July which are also really pretty, but January was the first one and the one that made me fall in love with those, and still one of my favourites) 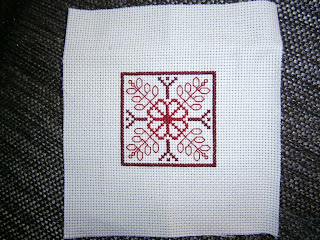 Sadly, I didn't find any good intranslatable words for 'J', so instead, I picked something that is, in my eyes, very, very German (also Austrian and Swiss, but I can't really speak for them) - 'Jodeln' (Yodeling). Now according to wikipedia, Jodeln is 'singing without words, using syllabels and rapid switches between high and low registers' and, also according to wikipedia, similar techniques have been used in mountain areas all over the worls to allow for communication between herders, gatheres, foresters and other people working in soltitude (the yodeling carries really far between mountains and makes it easy to send signals from one peak to another). Under the name 'Jodeln', however, this technique was first named in what is today's Bavaria and Austria, and it is still used in some forms of folklore music (if you are interested in that stuff, you should also look up the 'Alphorn') and it sounds something like this:

'J' is also for 'jolly', so let me use this post to thank the lovely Mii Stitch for this wonderful pattern she sent me after drawing my name in the giveaway: 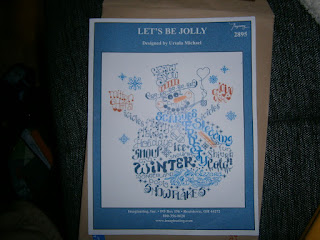 I've admired Ursula Michael's charts from afar for a while now, but actually having one in my hands it's even better than I imagined and I can't wait to get to stitch this!

The jolly chart looks so fun! I can see why you've admired them. Congratulations on being the winner. I didn't know yodeling was used for communicating that way! I learn something new every day. .

Great post Leonore. I so loved the third video.

Yodel-ay-ee-ooo! Great little crosses and glad the chart has arrived safely. Have fun :)

Oh my, new Bibi Hendl :D The first time I saw him I nearly fell of m chair :D People usually think that I am mad when I play that one on a party (until they realize that there are things even worse :D).
I think Jodeln is a pretty awesome way to annoy your neighbours, just like overtone singing (which is quite relaxing, even if your just try and fail...) :D

And lovely work on that ornament, it's really pretty =)

A lovely ornament and I thoroughly enjoyed the videos, even the chicken version which made me laugh. Great chart! I really like her designs as well, but haven't got my first yet, but I will.

Thanks for sharing. Enjoy your new chart!

I can't play the videos right now so I'm bookmarking this post for when I am on my own! Love the Jolly Snowman chart.