For a while now, I've been thinking about picking up the Alphabet Club SAL I dropped quiiiite a while ago - but I also knew I wouldn't be satisfied just doing one mashed-together catch up post, and the thought of doing aaaaaall the posts I missed in between seemed really challenging. Then Jo suggested I try and do one of the old posts each week, which should bring me up to date a bit before the end of the SAL, and I think that is a marvelous idea, and something I should be able to manage! So I went back through my blog, and discovered that the last letter I wrote about was 'D', but I also had skipped 'C' - and if I'm doing a catch up, I might as well do it properly! So this week I'll do 'C', next week 'E', and then just following the alphabet.

Now, first for the easy part - the stitching! I went through my pictures and suprisingly, found the same project I already showed in my D post. I present you, on the thrid from the left - Jack Sparrow! Wait, where's the C...oh right, my mistake. Of course, it is CAPT'N Jack Sparrow! 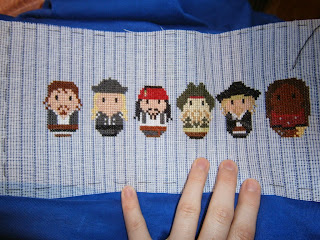 Now for the word...this is a bit trickier. You see, the letter 'C' is a bit of a special case in German, as it never stands on its own (other than in words that originate from other languages), but appears either as a 'ck' (which is just a short 'k' - normaly, consonants are doubled to get the short version, but for 'k', it gets an extra 'c'), which can only appear in the middle of words, or 'ch'. I checked my dictionary up and down, but I didn't find any word starting with a 'C' that isn't originally from English or French or some other language...but I still found one that might be worth a little fun fact, and that is the word 'Chef'.
Now in English, a chef is a cook - but in German, 'Chef' means 'boss', so we have a so-called 'false friend' here! That is why Germans, even if they are clever enough to avoid the word 'chef', might think the right English word to use is 'chief', which sounds kinda similiar, but would probably make for a funny mix-up in some situations as well.

Great explanation for "c"! Very cute design. I had fallen behind also and caught up by doing one post a week until I was on track again.

Nice design for 'C' and interesting about the language differences. Looking forward to the next post.

Great idea to work on one post a week, and interesting info!

What a clever idea to catch up on your posts LOL. Great work on Capt Jack too.
We do use chief for boss, usually in male dominated industries, such as building or offshore working. They also use crew chiefs in the entertainment industry on the technical side of things.

Very cute series with Capt. Jack. I took German in high school and a bit in college, and we never got that in-depth in discussions - it all just was.