This is my first signin for the TUSAL, the Totally Useless Stitch Along, where each month, you post a picture of a glass or jar holding your itty-bitty-thread ends and leftovers. Why? Because fun, that's why! I've seen this in the blogs of lots of my friends last year, and now I want to take part as well. How handy that I got to super neat jars for christmas that will totally fit the role of ORT jar! The smaller one is on my little crafting table near the couch, and was given to me by my friend Steffi - she saw it at a stor, thought of me, and bought it, so I found it in my christmas paket. The other one is a bit bigger, so it sits on my crafting desk where it is more likely to also hold bits of yarn and fabric. My friend Ashley made it herself, together with six others, that she sent to her friends all over the word in December. I love it, but since I haven't been working at my desk this month, I will only post the smaller one for now; and here it is: 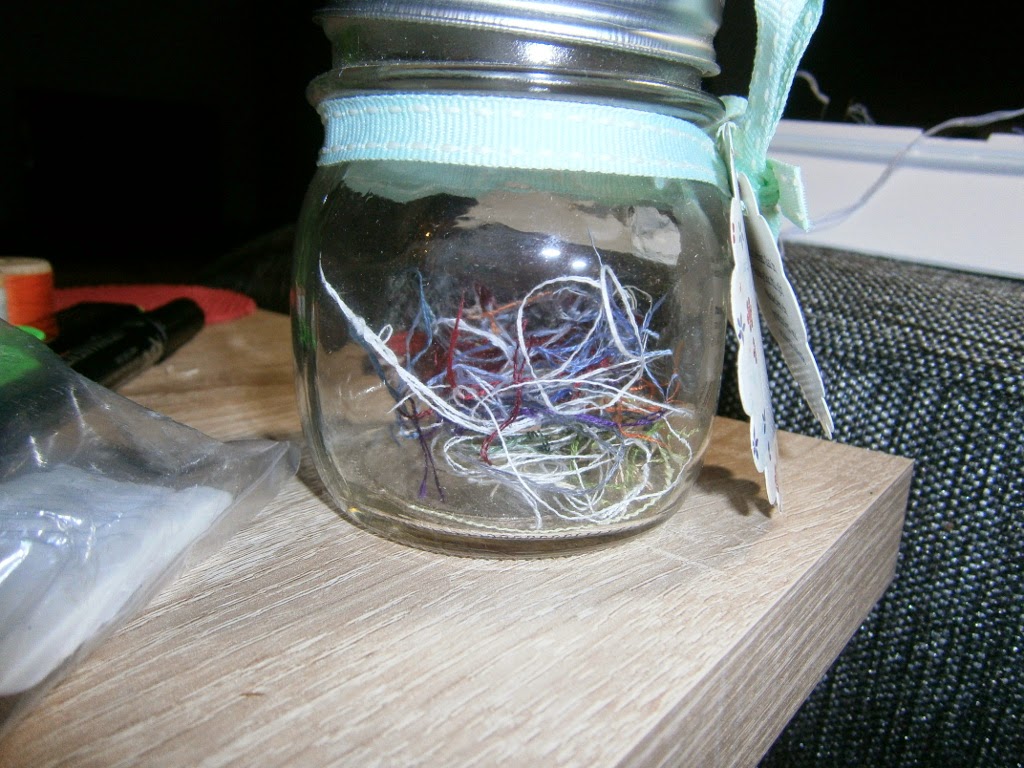 It's a pretty colorful mix - there are some greens on the bottom that are still from Lady, then some reds from Magicals january ornaments, and then all the blue and grey colors from Dark Force, which will likely dominate it for a while longer. I'm going to empty it into some bag, then show you a new picture in a month's time!

Mentioning Dark Force, I continued stitching on him like mad and made quite some progress: I finished two blocks a day Monday, Tuesday and Wednesday, and so I already have another column done to show you, and only six more days to catch up on...let's see if I can do two today as well! 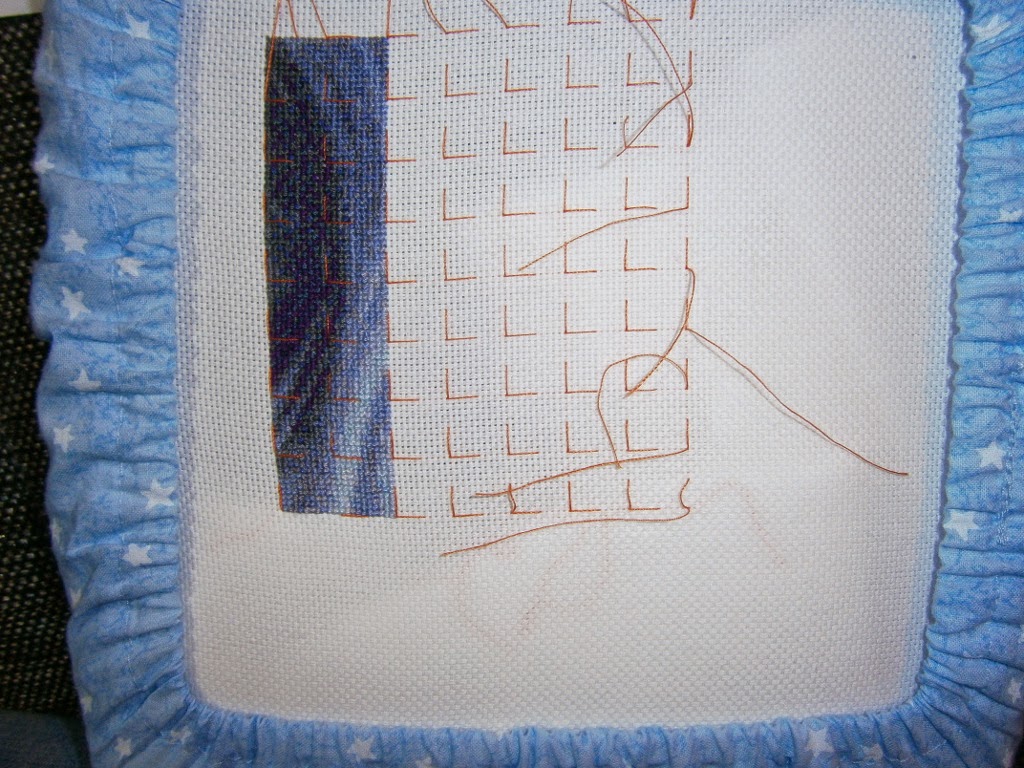 Since there wasn't too much time since the last update,  we didn't watch as much: NCIS S11, E20-23 (only one more to go until we have to wait again :( ), Castle S1, E7 and The Nanny, S6, E10-12.
However, I finally suceeded in establishing a set reading time for me again, which I didn't have for way to long - half an hour in bed every day, and the day before yesterday I finally finished Insurgent. I really liked it, although not as much as Divergent - mostly because I have a bit of a crush on Four, and he was severely underrepresented here. But I already started on Alligiant yesterday, and he seems to have a bigger role there again, so let's see how that works out! Also, the end of Insurgent wasn't as shocking as I thought it would be, but I still reall, really want to know what happens next, so that's a good thing I suppose!

I'll be back on the weekend with my SFS and possibly DESIGN checkins, so I hope to see you all again soon :)
Eingestellt von Leonore Winterer um 09:16

Good start to your orts collection

Wow, you are making great progress on that piece - Congrats!

The ORT jar is lovely! Fabulous progress on DF!
I loved that trilogy! Finished all three books in about 4 days. Granted I was on vacation so I was able to devote tons of time to reading. Have you seen the movie yet??

Well done on continuing to catch up with the blocks.

Did you know there is a hardback available called Four which contains four short stories about Four's back story before Divergent started?

I've been collecting them last year already, just never had a pretty jar to show ^_^

Thanks!
No, I haven't seen the movie yet...Felix hasn't read the book yet, and as I'm an advocate of 'books first', I'm trying to convince him to reading it before we get the movie ^_^

Yeah, I've seen it on amazon....I think I'll get it once I finished Allegiant, or maybe read a few books I borrowed from friends first, but I WILL read it!