A little later than usual due to more urgent stuff to be posted, but here is my weekly update on Lady & the Tramp (picture taken on Friday, when the update normally would have been due). So without further delay, here she is: 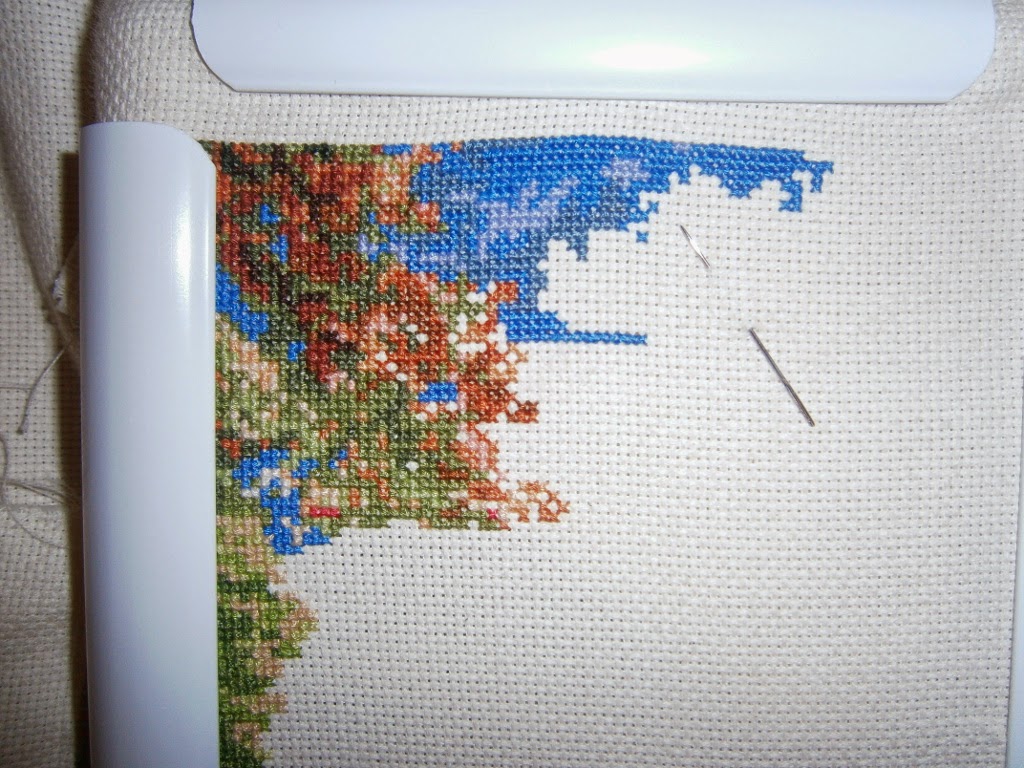 As you can see, I couldn't resist and already started on the sky, even though the tree isn't completely finished - I've been alternating little confetti-y bits of tree with bigger blocks of sky - but I think this week should finally see the last of the tree, of that one at least.

I also realized it's been a while since I last talked about stuff we've been watching, so quite a bit has piled up; I'll just take yare of it now before it gets even more:

Nice progress on Lady
Click is one of the few Adam Sandler movies that I deliberately watched, I am not usually a fan of his brand of comedy, The Back to the Future sequels stand up, not as good as the first but still a good watch. And you are really making me want to find German movies.
Still waiting for Vikings to show up on Netflix (we don't have amazon prime here) but I watched the first couple and enjoyed

I looked for Keinohrhasen and Zweiohrkucken on both Netflix and Amazon Prime and they are not available to me here :( . I love Vikings!

Every time I see your progress on Lady it makes me want to start work on Cinderella or Lion King and then I tell myself CELTIC GODDESS and that you, Nancy and I will work Lion King together which will be so incredibly fun!!

So we'll probably dare and watch the sequels some time soon, thank's for confirming! :D

It's mean of amazon prime to not show up in Canada, I think they claim that Vikings is 'exclusive' to their service, so who nows when it will shop up some where else...so rude!

It's ridicolous, we get all the English/American movies here, but hardly a German movie gets translated into English...they only remake them Hollywood-style and claim them as something new, then try and make even more money from us who already had the orginals xD

I agree, the Lion King will be so much fun when we all work on it together! How is Celtic Goddess going by the way, do you have anything new to show?

You are telling me!! I love the BBC televisions series like Being Human and MI5, but for some reason Hollywood feels the need to make an American version of Being Human which does not compare. Another great example are the Girl Who Kicked The Hornets Nest series, it was AWESOME as it was but Hollywood again stepped in and thought they should make am American version. Makes me sad.

I prefer the subtitled movies because dubbed over you don't get the real tone and meaning without hearing their voices. I can watch French and Spanish movies now without having to read too much, but German and Russian I still have to read and read and read and read ha, ha!

Celtic Goddess has nothing to show but the new gridding, HOWEVER! I did make some really great headway with the Dr. Who Scarf and I'm really eager to finish it as quickly as possible. I'd like Nancy's ma to have it for Christmas THIS year :D

For all of my complaints about Canadian netflix they do have a wonderful supply of BBC stuff, I love BBC's Being Human, and Merlin of course, can't wait to get into Downton Abbey

I hope amazon prime gets back on top with BBC stuff as well...taking off Dr Who is just a shame, and I'd really love to see Merlin eventually