I am dreadfully late for this post - so much so that I skipped posting my pies for January entirely, and am now posting both months together!

So January was a pretty good crafting month for me. I did a lot of stitching, but also a bit of crochet, and spent a reasonable amount of time on Finish-finishing stuff: 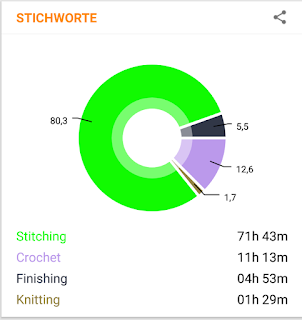 Projectwise, I spent some time with the House Rules and the Little River Blanket, stitched and finished Love you to Death, the Sheep, finished the last of the Zoe Box, and worked on my usual SALs: 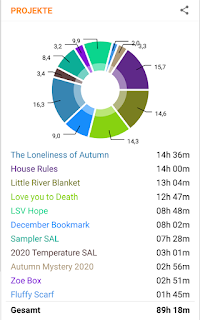 So far, so good for the start of the year! Then in February, my times plummeted, more than the short month accounts for. I spent a lot of time gaming and reading, so that's where the time went, I suppose, and I'm just glad that I managed to more-or-less keep up with everything, despite the smaller amount of time! 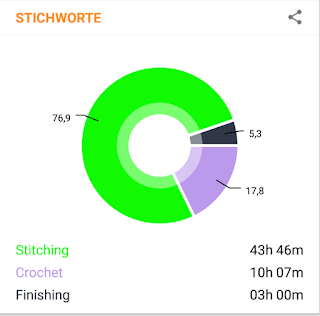 After finishing one rotation on the House Rules, I made the executive rotation to continue with another rotation (instead of switching, as I could have). I'm glad I did because I didn't get much else done (except for SALs), and this allowed me to stay on track with my dead lined projects! 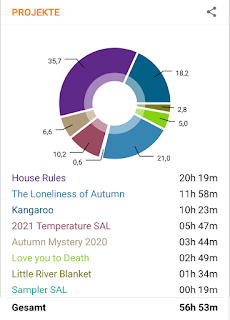 I'm doing pretty okay with March so far, so I hope my numbers will be back up to normal next time.

Posted by Leonore Winterer at 09:58

Always nice to see what you've been working on! I've had a couple of good weekends just lately.

I’m always amazed by your pie charts - both by the number of hours and your ability to keep track of those hours! Well done.

Those are impressive pies

These pies help us to be productive. It inspires me to track things and time spend on each project.

I love seeing your monthly pies and perfect that you posted them on pi day (or at least it works to that in the US where we put the month first). :-)