How did I end up in the middle of the month with none of my blogging done again? At least I can happily report that my crafting is on a good way again, and has been for all of October, and here are the pies to prove it! 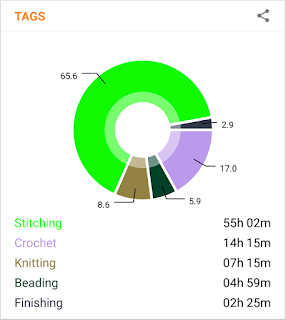 A good mix of crafting, actually. Lots of stitching, but I also started new knitting and crochet projects - Christmas projects that I'll be able to show later in the year - and got some beading done, which I will be able to show soon! 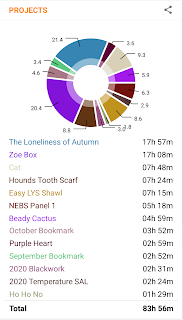 Namely, I pulled out the Beady Cactus and hope to have a finish soon! Apart from that we have TLOA (right on track), Zoe Box (awaiting finihs-finishing - maybe this weekend?), my crochet cat (done and waiting for GG) and Hounds Tooth, LYS and Purple Hearts are gifts I'll be able to show later in the year. There are my SALs I'll blog about soon, I don't think I've talked about Ho Ho No but that deserves a post of it's own, which leaves...my Never Ending Band Sampler! I continued stitching one band every week for all of October, which brought me here: 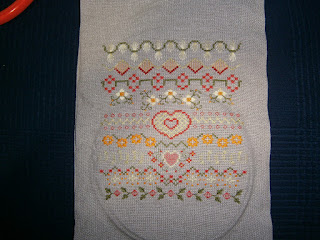 This is taking a little break until the new year though, as I started a new band sampler SAL with Jo! Boy, there really is a lot of stuff I need to tell you about...November is proving to be an exciting crafting month so far, so I hope to get you up to speed soon.