I'm way late for the May update for Rachel's Fully Finished Gallery, but due to Felix being terribly busy those last couple weeks, I just yesterday managed to make my quota of two fully finished objects per month!
So, let's start with the easier one, the one you had already seen: In April, I finished the bookmark fo the month on perforated paper: 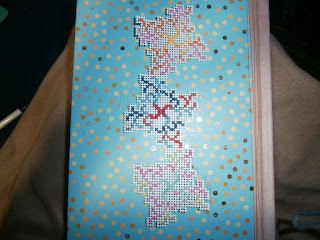 Jo asked whether I was going to back it with something, and I'm starting to think that might be a good idea - either cardboard or stick-on felt come to mind. What do you think? Do you have any experience on how perforated paper bookmarks hold up to actually being used?
My second fully finished object was Bloodmoon, and again, the inspiration for finishing this came from Jo. First, I spent about three hours stitching a witch on tansparent plastic canvas. The with is part of a pattern called 'Bitchcraft', also from UnconventionalXStitch (just like Bloodmoon): 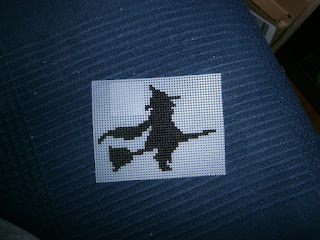 Then I had Felix frame Bloodmoon in a deep, black frame. I cut out the witch and used transparent sewign thread and a red pushpin to let her dangle from the top of the frame. The result looks like this: 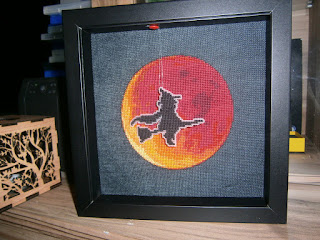 It's still hard to photograph - in real life, the white of the foam board isn't nearly as visible through the black fabric as it is in this picture. I thought about backing it with black paper, but only remembered when Felix was half done, and really, it's barely visible in real life. I really love this finish - thanks for the idea, Jo!
Posted by Leonore Winterer at 12:12

Leonore: I do like the way the white outlines the witch, she really stands out.
I had a perforated book mark, they really need a stable back, maybe a thin piece of plastic and then the felt would work, otherwise they tend to bend to easily.
Have a beautiful week.

Your witch does look good! You could always colour the white with a black Sharpie if you start to notice it too much.

Congratulations on two more fully finishes this month. The bookmark is really pretty and your finish of Blood Moon with the witch flying across its path is definitely inspired. Well done you!! :)

I think the only bookmark I made I had backed with fabric. It was a gift, so I don't know if she's actually using it, or displaying it.
I love the addition of the witch to the moon, what a great idea! A truly fantastic finish.