While wewere traveling California, I wasn't only working on 99 (which didn't see that much progress anyways), but also on a few other things - and of course, some shopping happened as well! So I have quite a few things to talk about today.

My first vacation start already happend on the train to the airport (I wanted to get the counting out of the way while I was still fresh and the journey was quiet). You might remember the Pineapple Shawl I was working on a while back...well, I wasn't really happy with how that was coming out with the yarn I was using, plus, Felix fell in love with the colours, so it was decided I make something for him instead. Since I didn't think he'd want to wear a triangle shawl (I shouldn't have worried there...he keeps stealing my Arke now) I wanted to make him a moebius loop, and he wanted a 'pattern with not so many holes in it', so we finally settled on the Ambarussa by MorbenDesign. I worked on this on the train and then mostly while we were traveling in our rental car - the pattern is very easy, which makes it perfect for when you don't really want to focus on what you're doing! I really like it, especially since the dark colours started to come in on the edges. I love how with the moebius method you're working outwards on both sides, it gives a really nice effect with the colours. I'm close to 2/3 done now, and hope to finish soon. 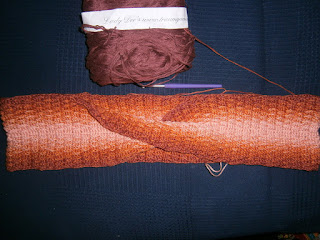 Between this, 99, and of course the vacation itself,  I was kept plenty busy for the first week or so - which is when some shopping happened. I didn't make it to a proper, brick and mortar needlework store (aside from Needlework Inc, which was more eye candy than shopping since those hand painted canvases are insanely expensive and I wouldn't even know what to do with one yet), which was probably very good for my wallet. I did get to visit the famous Joann and Micheal's, and while both didn't have a lot of actual stitching supplies, I stilled loved seeing that much crafting stuff in one place. I got a small kit for making friendship bracelets, since it had a kumihimo disk, which is something I wanted to try for a while, a fancy notbook (not in the picture), and in a stationary shop in Japan town I found this cool Metal Star Wars kit and some tiny origami paper (also not in the picture). 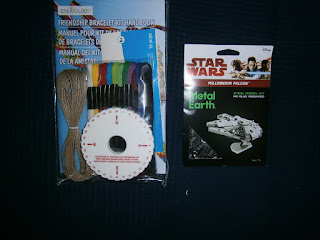 When we left San Francisco, I went to two Hobby Lobbies, which had a bit of a better selection of stitching stuff, especially some very reasonably priced kits. None of the bigger once really 'stuck' with me, though, so I only picked up a few smaller ones - four bookmarks and a Dimensions Gold Mini - and two more of my beloved non slip hoops. I also saw two very cool stores in Mariposa, one for beads and one with local Alpaca wool, but despite going there during the posted times, they were never open when we went there :( 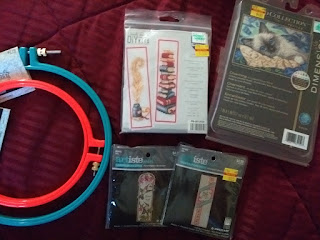 Despite my best intentions to not start anything new and worke on 99 more, I really, really wanted to play with my new stuff...so I let Felix choose and he picked Charming, the cute blue eyed kitten. So in a hotel room in Mariposa, I started my first ever Dimensions Gold kit and got the first three colours in before putting it away for the time being. I was positively surprised by the quality of the material in the kit, the only thing that confuses me is the thread holder that comes with it...how the heck are you supposed to but back partially used lengths?! 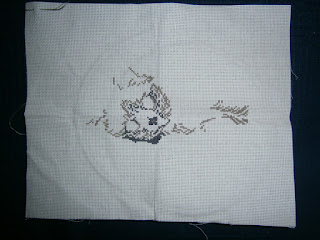 So as you can see, I picked the one of my new kits that was not a bookmark...and then I come home and see the Stitching Pirates group announced a bookmark exchange! Obviously, this left me no choice but to start another one of my new purchases - I picked the initial one, as it looks like a somewhat quick stitch. (I'm not very impressed with the quality of the kit though, especially the colours provided don't quite match with neither the colour key nor the cover picture...well, it'll do). 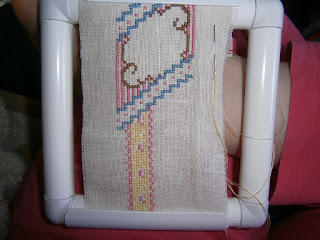 Posted by Leonore Winterer at 21:55

Great report on the vacation stitch stuff! I have a kumihimo disk. We had a lesson at one of my guild meetings years ago, but I didn't do anything with it after that. Now that I'm in Japan I really should do something with it! I used to watch for the sales at Hobby Lobby and get some very inexpensive stitching things. Joann's and Michael's frequently had 20% off coupons. Nothing like that in Japan! Bookmarks are great carry along projects Well done!

Yay! I like reading about your vacation. Sounds like you're having a great time. Dimensions has great kits and I still have no idea about the thread holders haha. I just make my own.

Nice stash! I love the bookmark with the pile of books on it.
The cat is looking lovely too. I don't buy kits any more because of all the issues you mention!

"pattern with not so many holes in it" haha! This sounds like a description my husband would give. They just don't appreciate fine lace on themselves. ;)

Hobby Lobby has one of the better clearance sections, at least that's been the case at our local ones. Michael's is pretty good but JoAnn's is just sad. All three have fabulous coupons! Love the ink and quill bookmark. It feels so Harry Potterish!